Oldham Coliseum Theatre has announced its Spring-Summer 2017 season and it looks like there’s lots to look forward to! From new takes on old classics to side-splitting comedies, and a glittering Bollywood musical to top it all off.

The season kicks off in March with a brand new look into Oldham’s past from writers Cathy Crabb and Lindsay Williams and composer Carol Donaldson. Meat Pie, Sausage Roll is a heart-warming new musical about family and loyalty set against the backdrop of Oldham Athletics’ memorable 1990/1991 season. For Mick, nothing matters more than Latics’ promotion to the top flight, but when his daughter’s wedding falls on the last day of the season, it all starts to go wrong.

From Thursday 13 – Saturday 29 April the Coliseum presents Bill Naughton’s Lancastrian comedy Spring and Port Wine. Rafe Crompton is a strict father who struggles to control his rebellious children as they swing into the sixties. His wife, Daisy, uses all her wiles to keep the family together but secrets are coming out of the woodwork fast and furious. 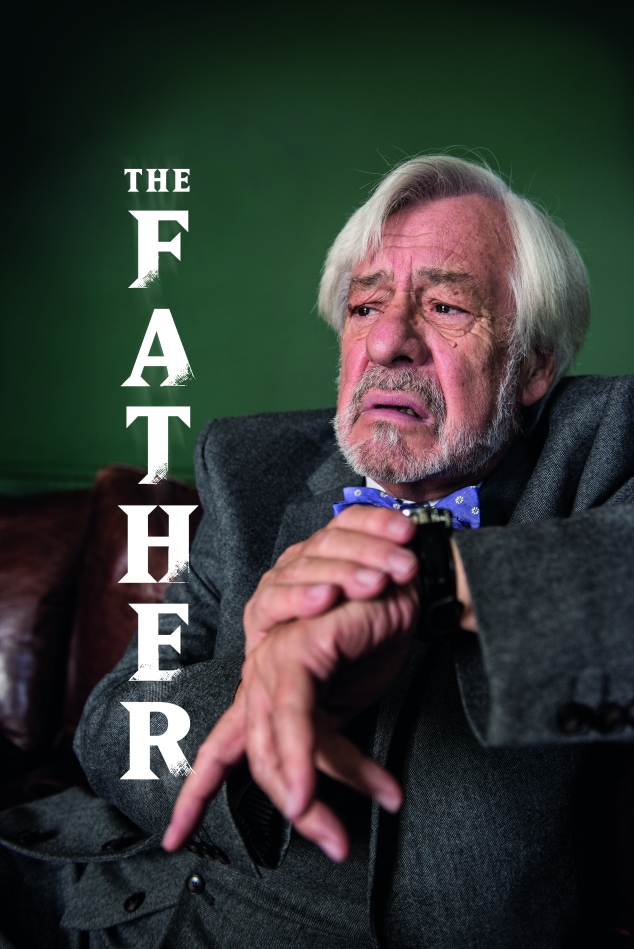 Actor, director and two-time former Coliseum Artistic Director, Kenneth Alan Taylor, returns to the Coliseum stage from Friday 16 June – Saturday 1 July to star in The Father. Written by Florian Zeller and translated by Christopher Hampton, the play portrays the devastating impact of dementia on one man and the people in his life. Andre once had a wonderful career as a tap dancer and now lives in Paris with his daughter and her husband. Or was he an engineer whose daughter now lives in London? The trouble is, he can’t quite remember.

Elsewhere in the season London Classic Theatre return with their tour of Hysteria, a farce in which Sigmund Freud meets Salvador Dali, from Tuesday 2 – Saturday 6 May, and the Coliseum welcomes contemporary company, Phyzzical, with their romantic comedy Bring on The Bollywood from Tuesday 18 – Saturday 22 July.  From Wednesday 10 – Saturday 13 May the Coliseum will also once again be joining forces with London’s Southbank Centre, Black Country Touring and Cast in Doncaster to present the second tour of Alchemy, a festival which celebrates South Asian arts, music and performance from international artists alongside local and regional British Asian talents.

For more information got to www.coliseum.org.uk

Formed in 1988, Mind the Gap is England’s largest learning disability theatre company that creates work for both UK and international audiences. As part of their Daughters of Fortune series, Mia, aims to explore the subject of people with Learning Disabilities becoming parents, expose the myths and expand on the truths.

Mia has just found out she is pregnant, how will she cope? Can she afford it? Will she make a good mum? What if she screws it all up? Questions all new parents would ask themselves, the only difference being non learning disabled parents have the right to make their own choices about their child and are at the heart of all decisions made. Having a Learning Disability means Mia will have to face many assessments, endless meetings and potentially fight for the right to keep her own child, as currently around 40% of parents with a Learning Disability have their child removed, although advocacy groups estimate this figure to be closer to 90%.

Such a monumental subject matter could have the potential to be heavy and difficult to discuss, however Mind the Gap excel at making this sensitive subject accessible and manage perfectly to approach things from a no nonsense and honest point of view. They bring their own unique brand of humour which cleverly pokes fun at the ridiculous and absurd way in which people with Learning Disabilities are at times treated. Director/Devisor Joyce Nga Yu Lee has worked with her performers to deliver a thought-provoking and powerful piece. The four actors Alan Clay, Anna Gray, JoAnne Haines and Alison Short each offer something uniquely special to the production. Each excelling in several roles and delivering with confidence a compelling and engaging piece of theatre. The mock quiz show section Don’t Drop The Baby was a particular highlight, funny and engaging whilst still delivering an important and strong message. With a great amount of well-timed humour, Mia will make you laugh just as much as you’ll feel tears welling as the cast open up about how it feels to be a person with a Learning Disability who may ultimately not have the final say in such a life changing and monumental decision.

Mia is a wonderful piece of theatre, bold, absorbing and engaging, an absolute must see and a credit to all involved.

Renowned Opera producer Ellen Kent returns to Manchester’s Opera House this month with Puccini’s beloved and one of the most popular classic operatic stories ever told, La Bohème.

Puccini’s masterpiece, with its soaring melodies and emotionally stirring orchestration is based on Henri Murger’s novel Scenes de la vie de Boheme, it includes many  unforgettable arias  including the beautiful ‘Your Tiny  Hand  is Frozen’, ‘They Call Me Mimi’ and ‘Musetta’s Waltz’.

Set in Paris, La Bohème tells the tale of ill-fated lovers Mimi and penniless writer Rodolfo. Mimi and Rodolfo instantly connect but Mimi’s flirty behaviour leads Rodolfo to call time on their love, wracked with guilt and pining for his sweetheart he soon returns to his lover but of course this being an opera there’s a sprinkling of tragedy to deal with along the way.

Ellen Kent’s La Bohème will be traditionally staged featuring stunning sets and beautiful costumes. The set will reflect the Bohemian art of the Parisian period and included in the show will be the additional treats of a live brass band, wintry snow effects and even Musetta’s dog which will make an entrance.

Said producer Ellen Kent: “The scene when Mimi and Rodolfo meet and she sings They Call Me Mimi always makes me cry. It’s a lovely piece of music. I try to do opera that the audience can emotionally connect with, not just on a musical level but with the personal drama happening on the stage.”

French soprano Olga Perrier together with the international soprano Ecaterina Danu are returning to star in this production as Muzetta and Mimi respectively. The international tenors Giorgio Meladze and Vitalii Liskovetskiy are also returning after they have previously enjoyed huge success performing in the UK.

Sung in Italian with English subtitles, La Bohème really makes Opera accessible for all, entertaining, poignant and playful, La Bohème is the ideal introduction for newcomers looking to explore what Opera has to offer as well as being a treat for the established Opera lovers amongst us.

There’s a mean green mother from outer space planting roots at the Palace Theatre this week and boy is she bad!! Chomping her way through Skid Row residents like they’re smarties, Audrey II takes no prisoners in her need for the bleed! Set in downtown Skid Row, a small and neglected part of New York City, Little Shop of Horrors is a riotous tale of love and laughter with a good dollop of murder and mayhem thrown in, all finished off with a little blast of nitrous oxide courtesy of devilish Dentist Orin Scrivello (Rhydian Roberts)! 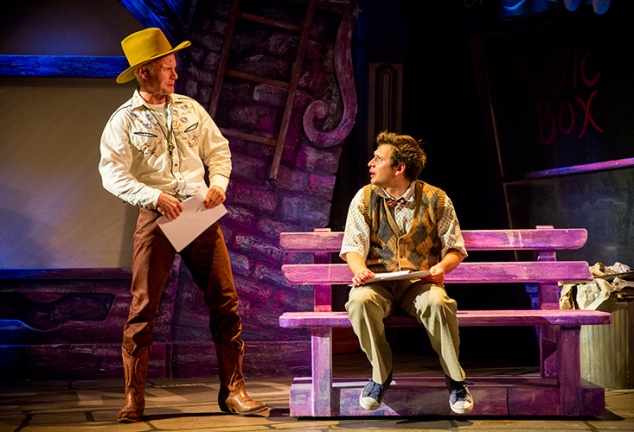 Unlucky in love (and life) Seymour (Sam Lupton) buys a strange and interesting new plant which soon turns around the fortunes of the failing Mushnik’s Flower Shop where he works as an assistant in downtrodden Skid Row. He names the plant ‘Audrey II’ in honour of fellow shop assistant Audrey whom he is secretly, completely and utterly besotted with. Audrey (Stephanie Clift) however is dating the sinister and bordering on sadist local Dentist, Orin, who would no doubt unleash a world of pain on them both should he discover Seymour’s secret. Add to this the slight complication that Audrey II is quickly growing into a demanding, ill-tempered, obscenity loving carnivore that’s attracting more and more attention by the second and you’ve got one hell of an entertaining production.

The cast is without doubt the best I’ve seen in any production of Little Shop, Sam Lupton and Stephanie Clift are the most perfect Seymour and Audrey you could wish for, they give their absolute all in this production. Their comic timing is impeccable and the chemistry between them on stage is a joy, the jackpot was well and truly hit when they walked into the audition room.

There was a palpable ‘YES!’ from the audience when Lupton and Clift sang the much loved classic Suddenly Seymour, a real stand out moment amongst an already top notch production. Add to this perfect pairing the deliciously dark Rhydian Roberts playing the Prince of Plaque who delights the audience with his infectious giggling and sinister smile and the quality of this production is rubber stamped. Rhydian is fantastic, a sneering, arrogant bully, exactly what you want from a dentist! Special mention must also go to Crystal (Sasha Latoya), Chiffon (Vanessa Fisher) and Ronnette (Cassie Clare), our gorgeous three ‘ragamuffins’ who narrate the show with their smooth melodies superbly.

Directed by Tara Louis Wilkinson for Sell a Door Theatre Company and Damien Tracey Productions, Little Shop of Horrors is a monster of a hit, with classic Howard Ashman and Alan Menken songs that you’ll be humming for days, a killer set and top class cast this show is an absolute must see! Just remember ‘Don’t Feed The Plants!’

On at the Palace Theatre until Saturday 5th November