Everybody cut loose… Footloose has returned to Manchester!

The feel-good all singing, all dancing musical follows the story of teenage rebel Ren McCormack who arrives in the small town of Bomont, and to his dismay finds that music, dancing and rock n roll is banned following a tragedy that struck the town 5 years prior. Ren, along with the town’s teenagers, take matters into their own hands and fight to bring joy back to the town. And what brings more joy than dancing!

The cast is led by Joshua Hawkins as Ren McCormack, the charming big city boy who shakes up the small town. Joshua is joined by Lucy Munden as the girl next door-cum-hellraiser Ariel Moore. The duo make a good pair and their effortlessly beautiful voices shine, particularly within their romantic duet ‘Almost Paradise’.

The leads are joined by TV personality, and star of numerous West End productions, Darren Day, as the firm Reverend Shaw Moore. Darren gave a strong performance, but the character as a whole leaves something to be desired. The deep scenes only seem to scratch the surface of the emotion that could be portrayed, although Day’s musicality and voice hold its own within this very talented cast.

The biggest surprise and star of the show has to be Jake Quickenden in the role of Willard Hewitt. Quickenden – best known for his role in Hollyoaks, winner of Dancing on Ice and previous Dream Boy – is a great fit for the role of tough boy Willard, really giving the character the energy and spark it needs and deserves. His comedy was sincere and easy and he displayed top notch vocals and dancing whilst even playing guitar on stage too.

One of the best elements of the show has to be the musicality that runs through the core of the production, as each member of the cast take on the role of orchestra within the midst of the onstage action. From flutes to guitar and saxophones, the cast wows as they bring the music right into the story. Not only playing an instrument but singing and dancing whilst doing so, making the cast not only triple threats but quadruple threats (if that’s even a thing?).

The choreography is fun and athletic, with lots of playful thrusting and the odd typical 80’s dance move thrown in, simply adding to the overall joyous nature of the musical.

The cast is very small, which sometimes can be felt in the dance numbers, as it misses the full stage production feel that can be expected with such large-scale musicals. With a main cast of 6 doing most of the dancing throughout, as other cast members do their best to join in whilst playing instruments, this does restrict the energy and scope of the choreography.

If you’re familiar with the film version, either the 1980’s Kevin Bacon classic or the more modern 2011 remake, you’ll know the musical features 80’s pop hits such as ‘Holding Out for a Hero, ‘Almost Paradise’, ‘Let’s Hear It For The Boy’ and of course the unforgettable title track ‘Footloose’. However, the other songs are more than forgettable in-between, which really holds the production back from its full potential.

Despite this, the songs that are known and loved from the show are its stand out moments. ‘Lets Hear it For The Boys’ is a real crowd pleaser – and not only because the audience is treated to a dance from a particularly popular cast member in gold hot pants…

‘Holding Out For A Hero’ is the perfect female powerhouse song, bringing together the wonderful voices of Lucy Munden, Oonagh Cox and Jess Barker combined with some pure 80’s music video vibes.

Overall Footloose is a joyful spectacle that will leave your toes tapping and face smiling. Just as in the story, the musical will remind you how amazing it can feel to really let loose and dance the night away.

You can catch Footloose at the Opera House, Manchester until Saturday 5th March, tickets available here. 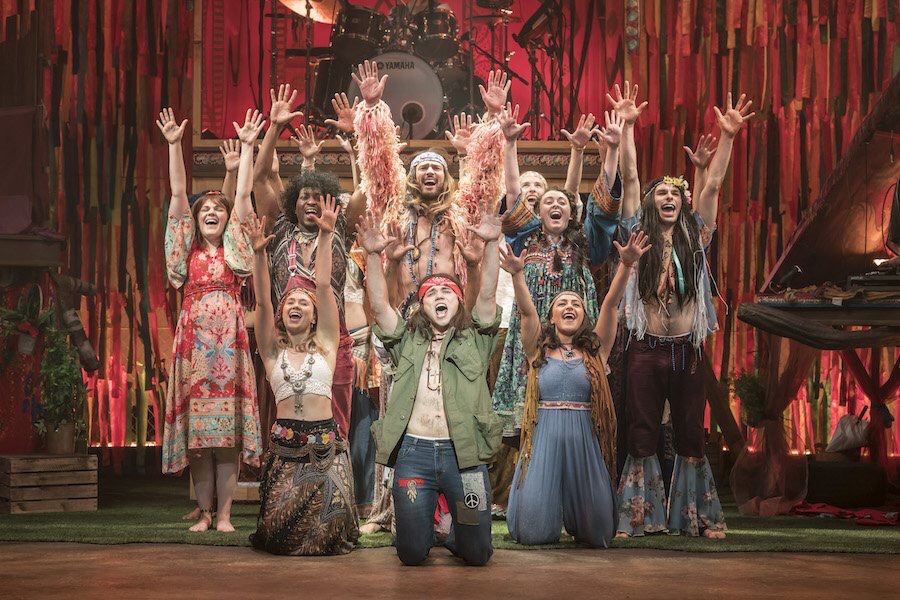 This inventive production of Hair The Musical has been on quite a journey these past few years, from first opening at the intimate Hope Mill Theatre back in 2016 to a sell-out London run winning a WhatsOnStage Award along the way; it now makes its return to Manchester opening at the city’s Palace Theatre as part of an extensive 50th anniversary UK tour.

Set in New York’s East Village at a time when the emerging youth counterculture was rejecting mainstream America and growing increasingly disenfranchised by the controversial war in Vietnam, Hair still remains one of the most iconic rock musicals of all time. A tribe of free thinkers who turned their backs on convention creating their own family in which to belong, advocates of peace, love and liberal thinking. Central to the story is the plight of Claude (portrayed brilliantly by Paul Wilkins) torn between rejecting his military drafting and embracing this non-violent, peace loving tribe. 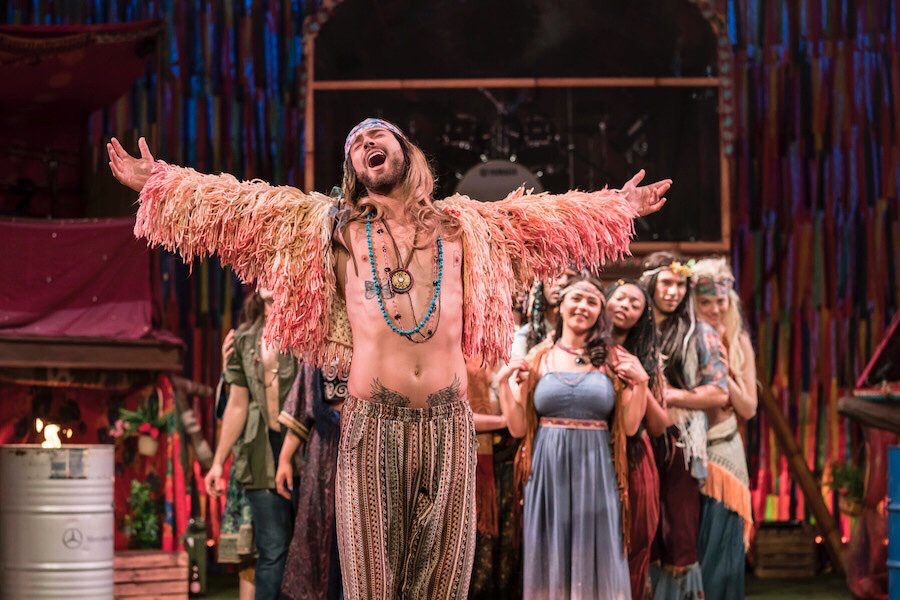 Very much an ensemble production Hair showcases a cast of incredible talent. Opening number Aquarius vibrantly and powerfully sets the scene, drawing the audience into this joyous celebration of love, freedom and pacifism right from the start. Maeve Black’s beautiful set design and costumes transforming the Palace Theatre into a psychedelic heaven lit to perfection by Ben M Rogers.

Director Jonathan O’Boyle ensures the audience are taken along for the ride involving them in this exuberant trip on multiple occasions. Jake Quickenden as Berger confidently leaps into the stalls in little more than a thong while Tom Bates takes great delight in perching on an audience members knee during his hilarious performance as Margaret Mead. 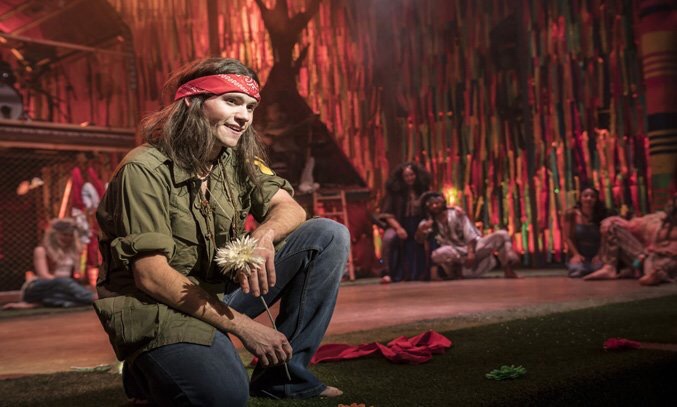 Paul Wilkins heads up the strong cast proving what a talent he is in the role of Claude. Thrown into turmoil at the life changing decision he faces, his anguish and torment delivered with passionate energy. Jake Quickenden makes for a confident and flamboyant Berger, athletically strutting around the stage dishing out powerful vocals along the way. Daisy Wood-Davis shines in the role of Sheila, her voice as powerful as it is beautiful.

Tom Bates has the audience in the palm of his hand as Margaret Mead while Natalie Green as soulful Cassie is a joy. Other notable performances in this excellent ensemble are Alison Arnopp as the enigmatic Jeanie, Aiesha Pease whose rich tones warm the soul and Bradley Judge who is enormously entertaining as Woof. 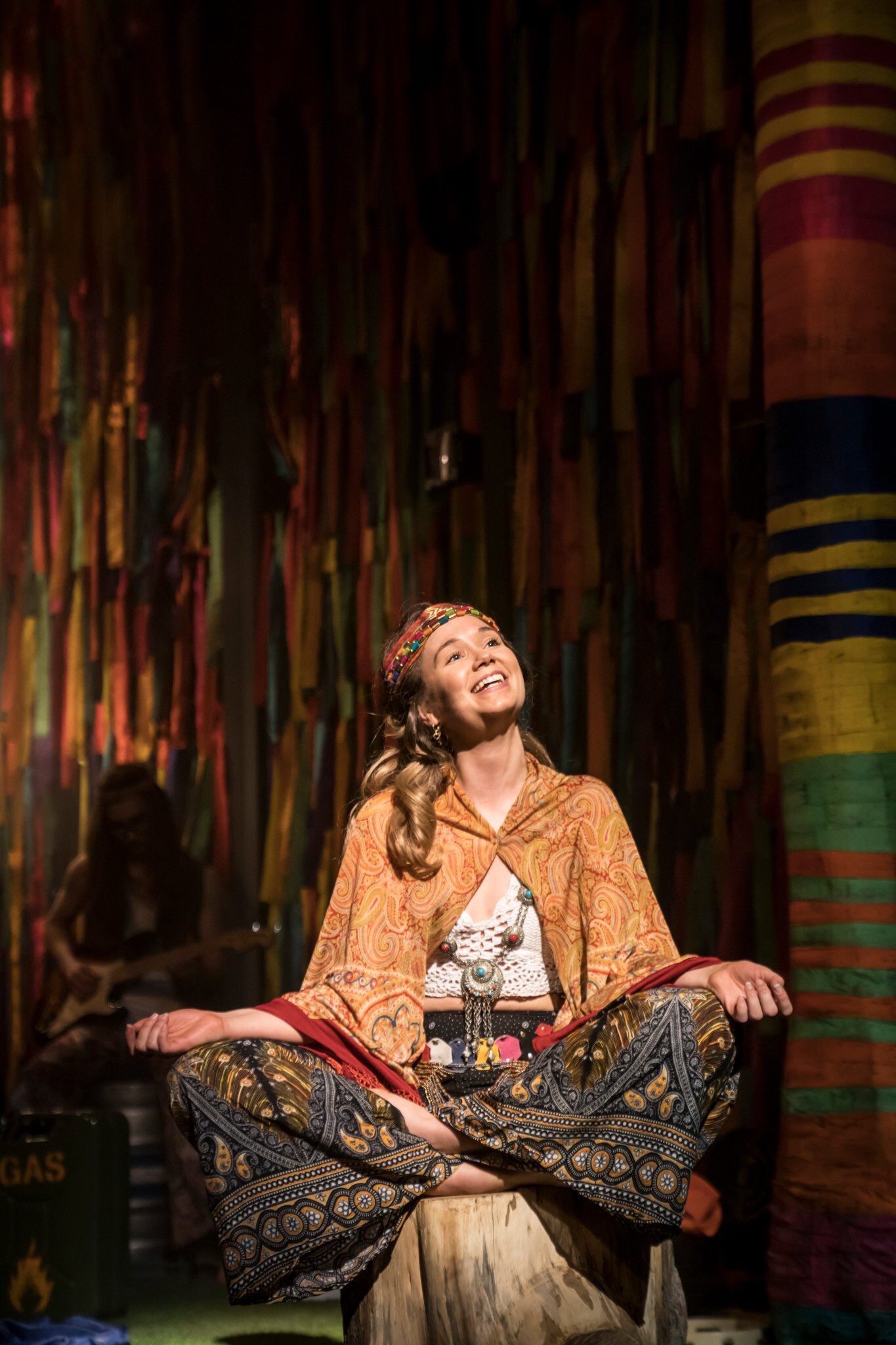 The cast work together superbly and all deserve praise, they deliver William Whelton’s inspired choreography to perfection, often moving as one, pulsing together in perfect harmony. Musical Director Gareth Bretherton leads the small group of on stage musicians confidently ensuring this electrifying score is given the platform it deserves.

While the themes may not be so shocking to audiences now in more free-thinking, accepting times its message still remains enormously relevant; the despicable quote from Donald Trump heard ringing through the auditorium at the very start proving this point entirely. 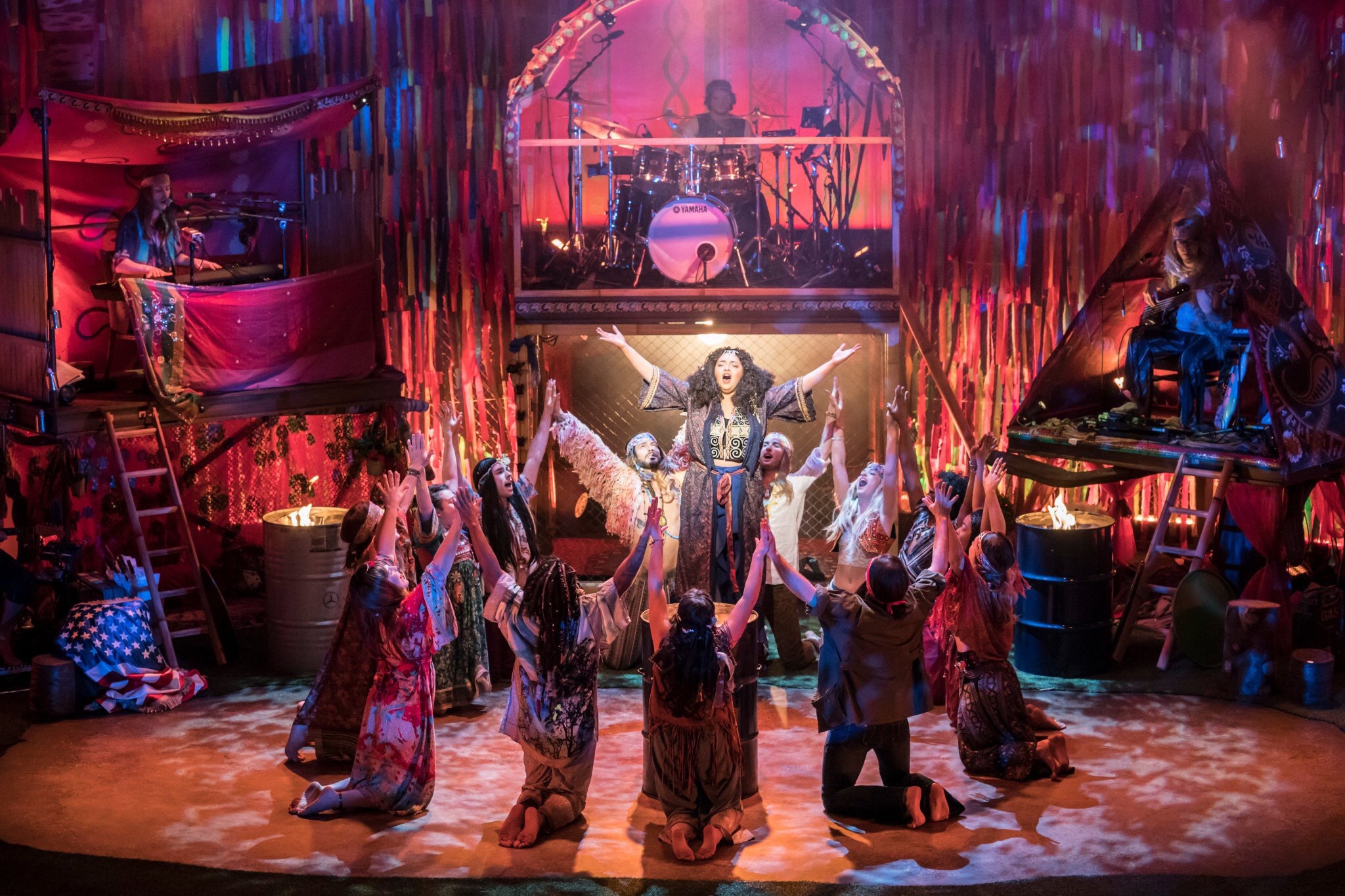 Hair gives a touchingly symbolic reminder of the fact that we really are just one tribe. Its hippie, trippy vibe is deliciously infectious bringing every audience member to their feet in celebration of this triumphant piece of theatre while the power of final song Let The Sun Shine In offers hope and proves just how powerfully emotive theatre can be. Hair’s transition from Hope Mill Theatre to the much larger stage of the Palace theatre is seamless as this beautifully crafted and joyously affecting theatre absolutely lets the sun shine in. 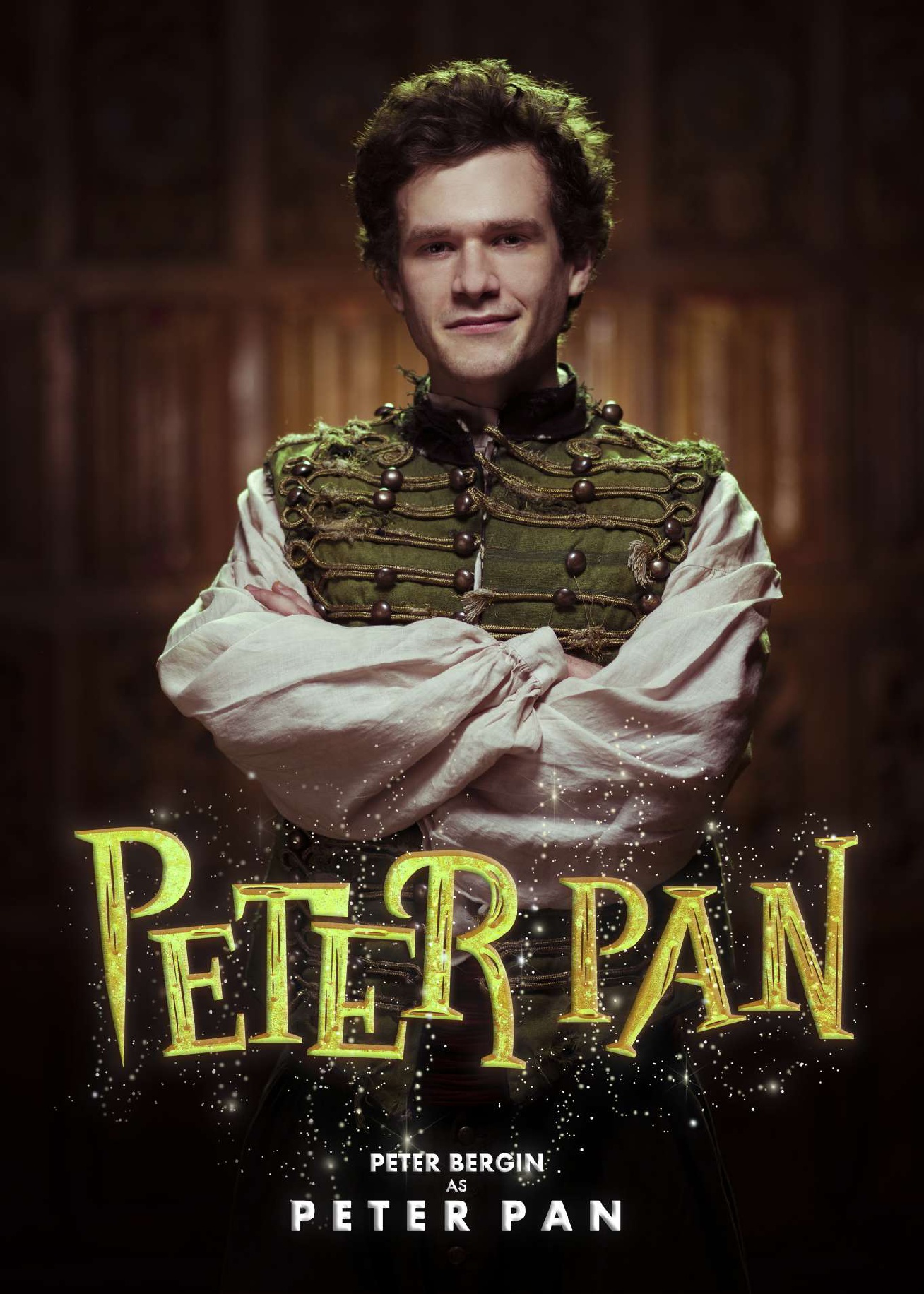 Peter Bergin who trained at Rose Bruford, will take flight in Blackpool as he takes over the role of Peter Pan from Jake Quickenden who will soon be appearing on ITV’s Dancing On Ice.

Tickets can be purchased here. 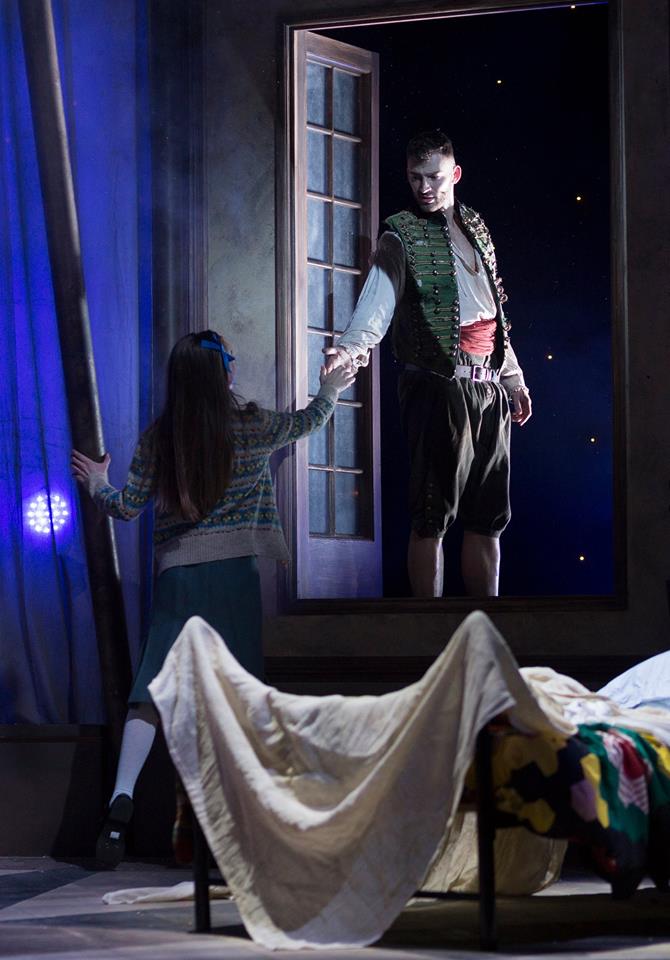 Starring X Factor, I’m A Celeb and soon to be Dancing On Ice favourite Jake Quickenden as Pan with Liverpool legend Jennifer Ellison as the villainous Hook and Maureen Nolan as Mrs Darling, Peter Pan is a magical, feel-good, re-telling of an all time classic.

Designer Jessica Curtis sets the action beneath a large eye catching & atmospheric draped tipi, a simple but effective set which lends itself well to scene changes and captivates audiences imaginations as we fly with Pan, Wendy, John and Michael through their bedroom window to Neverland. 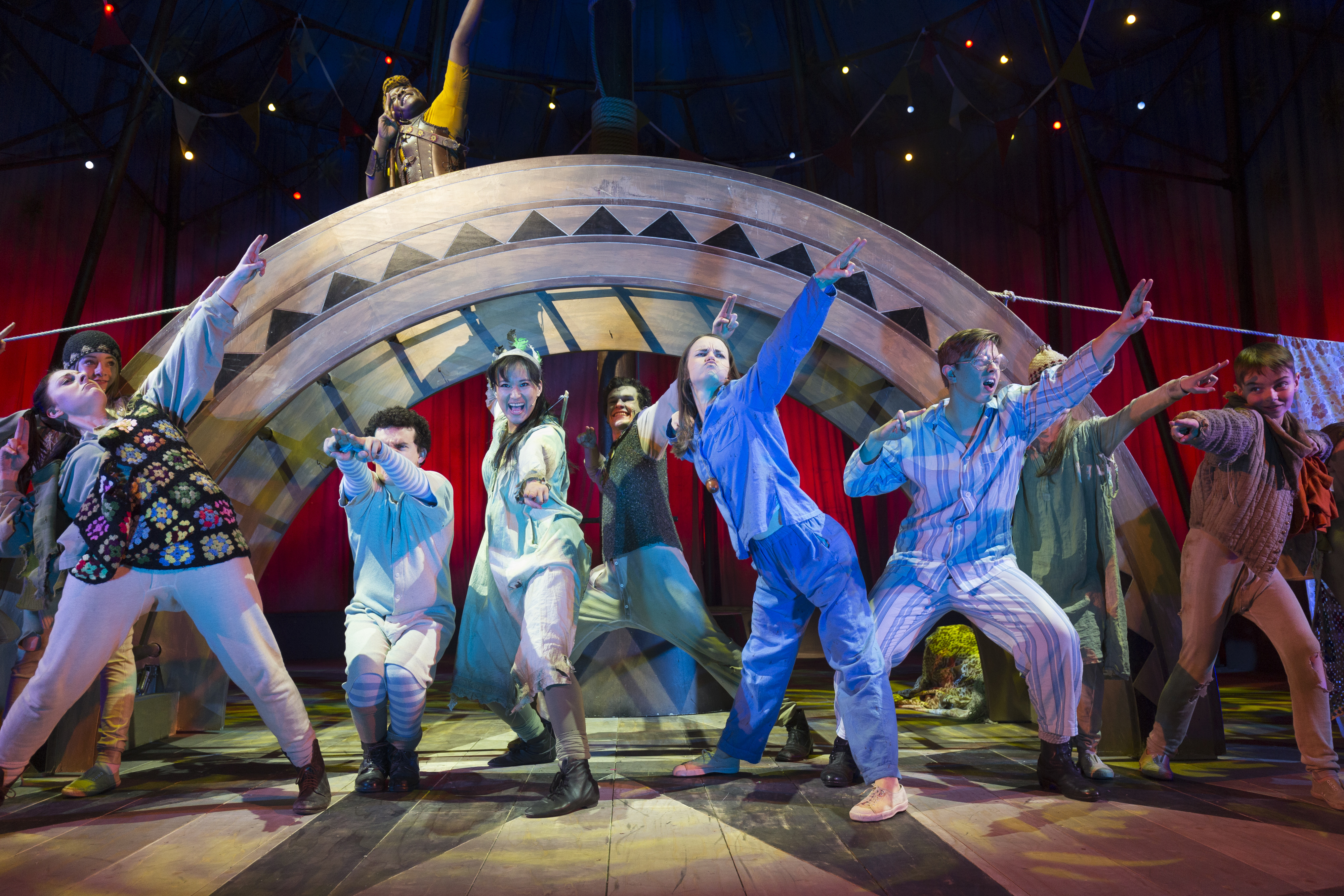 Quickenden is on fine form as he makes his stage debut, he is hugely likeable and makes for a charismatic Pan, showcasing his vocal talents beautifully in each of the crowd pleasing musical numbers which include Uptown Funk, Can’t Stop The Feeling and We Are Family.

Ellison’s Hook perfectly compliments Quickenden’s Pan, she is fierce, feisty and boy does she know how to play a baddie……oh yes she does! She has the audience in the palm of her hand from the off as she revels in the boos and delights in the hisses, a glint of devilment in her eyes, she’s all about having fun with this role and giving the audience the great time they came for. 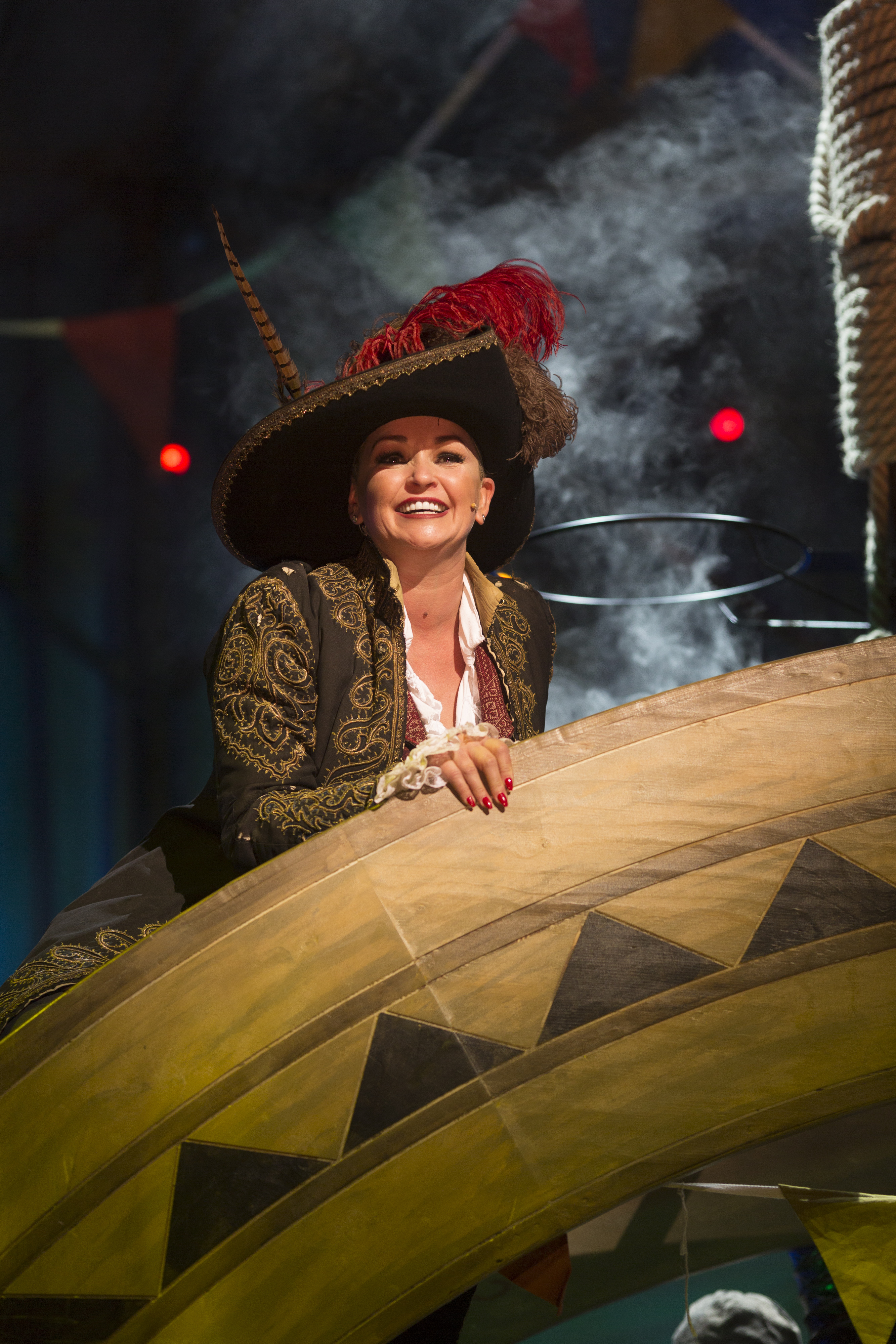 The strong supporting cast work incredibly hard doubling up as both the Lost Boys and Hook’s motley crew to great effect. Director Kirstie Davis ensures each character is clearly defined as they work together seamlessly, each and every cast member full of energy and enthusiasm, engaging the audience entirely. With an additional creative element of puppets taking on the role of Nanny the Dog and the ticking crocodile, both really add to the magic of the piece. Special mention must also go to Grace Osborn as Wendy, strong and sassy, her duet of Breakaway with Quickenden is a real highlight of the show.

The promise of a musical adventure is entirely accurate, while there are some of the fun elements of panto with audience interaction and great humour delivered by local Radio favourite Scott Gallagher as Smee, Robert Marsden’s adaptation of Peter Pan is a step up from the cheeky gags of panto and is more a musical dramatisation of a classic tale. Act One allows the audience to settle into the production before a fast paced all action second act keeps everyone engaged as they will Pan to win the day as he battles to save Wendy, John and Michael from walking Hook’s plank. 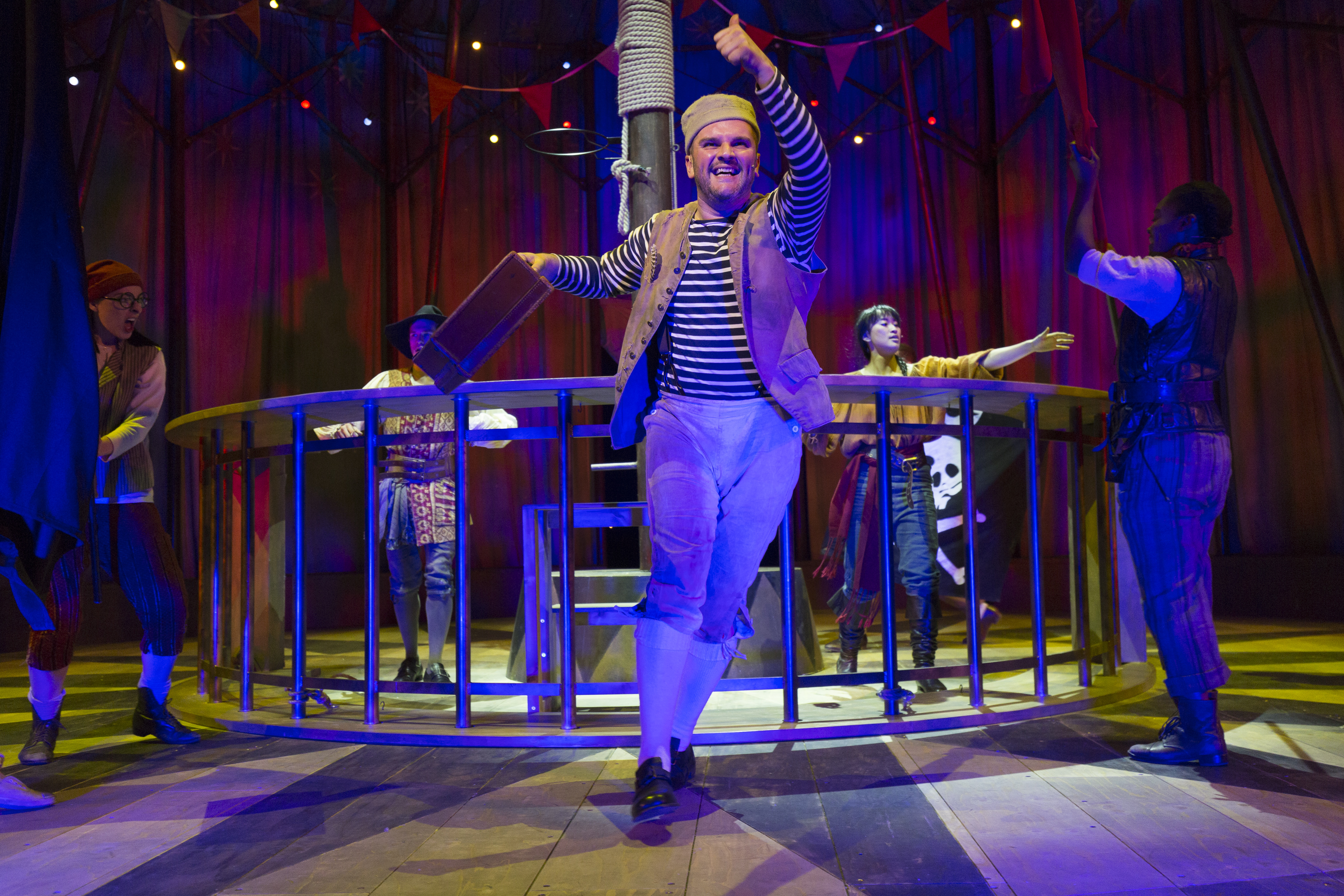 The production has something for everyone, an engaging story, well chosen musical numbers, lots of humour as well as strong individual performances. Let your heart be warmed by this magical adventure, highly entertaining, well delivered and jolly good family fun.