Birmingham Royal Ballet brings ballets greatest love story to the Lowry’s lyric stage this week and it is as breathtakingly beautiful as ever.

Set to Tchaikovsky’s instantly recognisable score, played to perfection by the Royal Ballet Sinfonia, Swan Lake offers an unforgettable night of theatre. From the opening of Act I it’s clear to see why this classic production first created in 1981 by Sir Peter Wright and Galina Samsova remains a firm audience favourite. From stunningly intricate choreography to lavish sets, sumptuous costumes to sensational performances this magnificent production has it all.

Split into four acts Swan Lake tells the dramatic love story of Prince Siegfried and Odette; impeccably danced by César Morales and Momoko Hirata. Opening with a funeral scene following the death of The King, Prince Siegfried’s fear of a forced marriage is realised. With no desire to marry he distracts himself by heading off to the Lake with faithful equerry Benno (danced wonderfully by Tzu-Chao Chou) for a spot of hunting. It is here by the moonlit waters he witnesses the majestic Odette, a stunning Swan Princess who has been cursed to live as a Swan by evil sorcerer Baron von Rothbart. The spark is immediate, and the Prince falls hopelessly in love. From here their dramatic story unfolds, exquisitely told by this highly skilled company.

César Morales excels as Prince Siegfried, athletic yet gentle his bewitching by the glittering Odette feels entirely believable. Momoko Hirata captivates entirely, her elegance as the delicate Odette in complete contrast to the determined and devious Odile. She performs the complex choreography with such graceful ease appearing at times to almost float on air. The pairing of Morales and Hirata works beautifully every intricate movement appears effortless with each moving pas de deux receiving rapturous applause.

One thing which really stands out in this production is BRB’s ability to consistently deliver complex choreography while still ensuring the storytelling is both clear and well defined. There is never any confusion as to what is happening on stage as the company have wholeheartedly mastered the art of storytelling through dance. The addition of Phillip Prowse’s grand sets and lavish costumes adding depth and richness.

This is truly a company production and no Swan Lake is complete without the iconic cygnets whose presence on stage for the opening of Act IIIV drew gasps of delight prompting a spontaneous applause so impressive was the sight. Their perfectly in-sync delivery is a genuine moment of unforgettable joy.

This thrilling production really is a ballet for all; young , old, long standing ballet fans and first timers alike will fall in love with BRB’s Swan Lake, epic in scale and exceptional in delivery, if you only ever see one ballet make sure it’s this one. 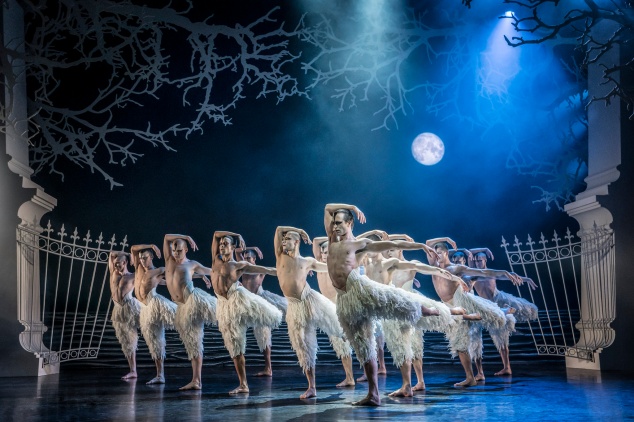 Some shows are so iconic that a single image immediately identifies them, and 23 years after the all-male swans first leapt onto the stage in a flurry of feathers, Matthew Bourne’s Swan Lake has certainly earned this status

Taking the classic score by Tchaikovsky, and reimagining it with a male central pairing and corps, Bourne – who directs as well as choreographs – shook up the traditional concept of classical ballet with this piece when it premiered in 1995.

He admits that not everyone in the dance world welcomed the bold move but it was worth every ruffled feather!

Now updated for 2018, the production has lost non of its impact, and indeed looks and feels as fresh as ever.

The production opens on the bedroom of a restless prince (Dominic North, whose youthful appearance belies his experience in this role). The forced perspective of Lez Brotherston’s Palace set trapping the young royal figuratively and literally – tight bed covers restricting him just as his royal role does.

The society scenes that follow are a witty joy – we even have a royal corgi – with lots of little winks and nods for the audience. There’s so much to see, this is definitely a show that would lend itself to repeat viewings to take everything in.

We follow the Prince and his mother the Queen – an arch Katrina Lyndon giving off perfect ‘Princess Margaret in The Crown’ vibes – going about their royal business.

Trying to conform, the Prince hooks up with party girl Carrie Willis (a real scene stealer of a performance) and they go on a date to the theatre – there is some ‘classical’ ballet in the show – of sorts!

Things don’t go well and the Prince finds himself in a deserted moonlit city park – when the swans arrive, lead by Will Bozier (authoritative and reminiscent of the great Adam Cooper)

What follows is some seriously strong dancing in all senses of the word, which culminates in the mesmerising pairing of North and Bozier. Seeing the Prince shake off his doubts and realise at that moment he is free to be himself is a genuinely joyous and touching moment. 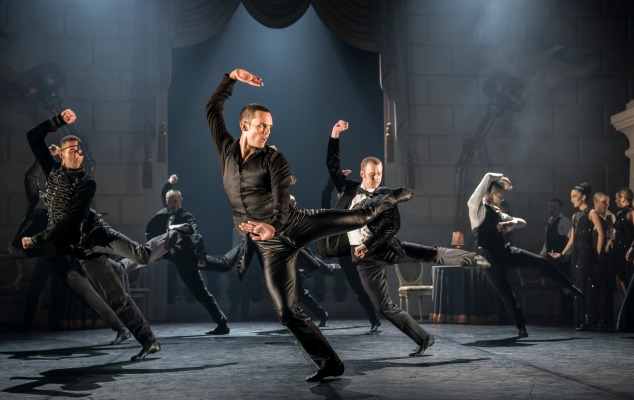 The male company dancers as swans are menacing and magnetic – they even hiss – yet are incongruously vulnerable too. The physicality displayed is done justice by Bourne’s unique choreography – all stamps, jumps and bird-like angles.

The scene gives the whole company a chance to shine – as things whirl towards the chilling conclusion of the ball, and the poignant final scene.

The Lowry audience were straight on their feet at the end, and indeed probably would have stayed there for a while longer if the curtain hadn’t been brought down. I’m not sure I can recall a warmer and more enthusiastic response to a dance show.

A very special evening watching a very special production. At The Lowry until Saturday December 1 – one not to be missed. Tickets available here.