Birmingham Royal Ballet brings ballets greatest love story to the Lowry’s lyric stage this week and it is as breathtakingly beautiful as ever.

Set to Tchaikovsky’s instantly recognisable score, played to perfection by the Royal Ballet Sinfonia, Swan Lake offers an unforgettable night of theatre. From the opening of Act I it’s clear to see why this classic production first created in 1981 by Sir Peter Wright and Galina Samsova remains a firm audience favourite. From stunningly intricate choreography to lavish sets, sumptuous costumes to sensational performances this magnificent production has it all.

Split into four acts Swan Lake tells the dramatic love story of Prince Siegfried and Odette; impeccably danced by César Morales and Momoko Hirata. Opening with a funeral scene following the death of The King, Prince Siegfried’s fear of a forced marriage is realised. With no desire to marry he distracts himself by heading off to the Lake with faithful equerry Benno (danced wonderfully by Tzu-Chao Chou) for a spot of hunting. It is here by the moonlit waters he witnesses the majestic Odette, a stunning Swan Princess who has been cursed to live as a Swan by evil sorcerer Baron von Rothbart. The spark is immediate, and the Prince falls hopelessly in love. From here their dramatic story unfolds, exquisitely told by this highly skilled company.

César Morales excels as Prince Siegfried, athletic yet gentle his bewitching by the glittering Odette feels entirely believable. Momoko Hirata captivates entirely, her elegance as the delicate Odette in complete contrast to the determined and devious Odile. She performs the complex choreography with such graceful ease appearing at times to almost float on air. The pairing of Morales and Hirata works beautifully every intricate movement appears effortless with each moving pas de deux receiving rapturous applause. 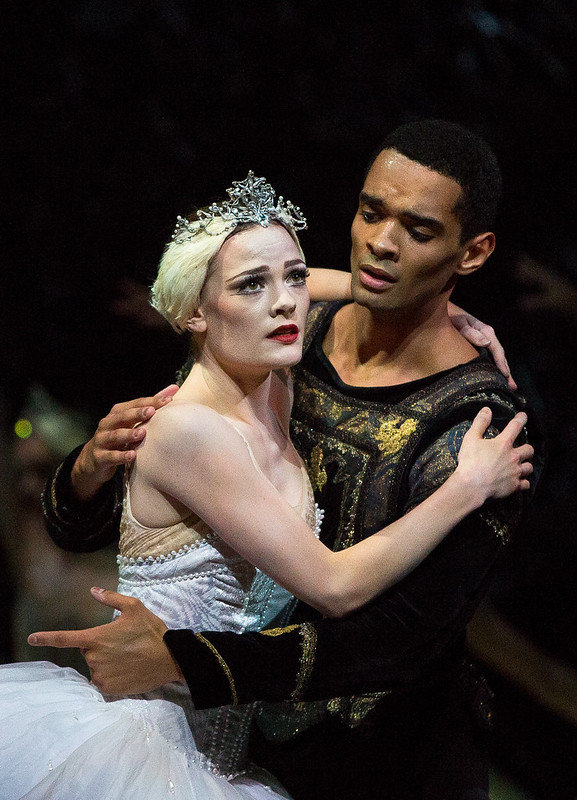 One thing which really stands out in this production is BRB’s ability to consistently deliver complex choreography while still ensuring the storytelling is both clear and well defined. There is never any confusion as to what is happening on stage as the company have wholeheartedly mastered the art of storytelling through dance. The addition of Phillip Prowse’s grand sets and lavish costumes adding depth and richness.

This is truly a company production and no Swan Lake is complete without the iconic cygnets whose presence on stage for the opening of Act IIIV drew gasps of delight prompting a spontaneous applause so impressive was the sight. Their perfectly in-sync delivery is a genuine moment of unforgettable joy.

This thrilling production really is a ballet for all; young , old, long standing ballet fans and first timers alike will fall in love with BRB’s Swan Lake, epic in scale and exceptional in delivery, if you only ever see one ballet make sure it’s this one.