Returning to Manchester after her triumphant spell in the Bodyguard, Alexandra Burke proves this diva is here to stay as she delivers all the sass and attitude that makes Deloris Van Cartier such a loveable and unforgettable character. 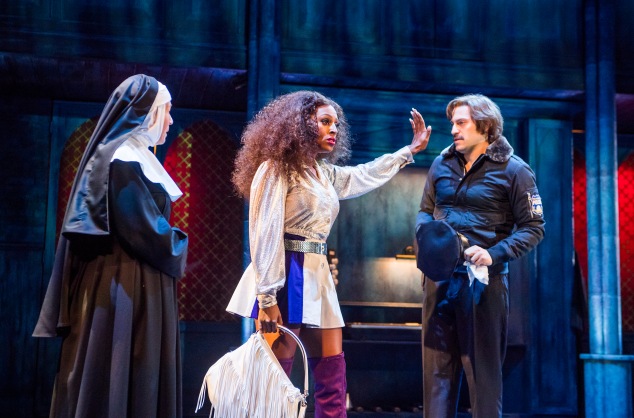 Directed and Choreographed by Strictly legend Craig Revel Horwood, Sister Act tells the story of wannabee singer Deloris who sees a little too much during a late night discussion between her married boyfriend Curtis (Aaron Lee Lambert) and his no good cronies, one of which he believes has ratted him to the cops. Deloris flees for her own safety and finds sanctuary in the local Convent under the instruction of local cop and former school friend Eddie (Jon Robyns). Life as a Nun is a million miles from her usual liquor swilling, cigarette smoking, good time gal days but that irrepressible Deloris spirit soon has chance to shine when she’s given the opportunity to work with the choir of Nuns who currently sound like a cat’s chorus.

Burke is perfect in the role of Van Cartier, with just the right amount of sass and diva attitude she also has a lot of fun with this role and her comedic side is given the opportunity to shine, add to it that voice and wow, we have our star!

Burke is complemented by a strong cast; the Nuns really do take this production to the next level, each of their scenes is full of joy and every actress gives their absolute all. Notable performances come from Karen Mann as Mother Superior whose stern guidance despite frustration after frustration eventually develops into a solid bond, and the fabulous Sarah Goggin whose is a joy to watch as Sister Mary Robert, gaining in confidence with more than a little guidance from her new found sister. Jon Robyns makes for a great Eddie and you’re desperately willing him and Deloris to get together pretty much from the start of the show.

The choreography is fun and flirty and further adds to the laughs this production provides, Matthew Wrights set and costume design works well transporting us from 1970’s nightclub to quiet Convent with ease. The one thing that distracted me a little during this production was the use of actor-musicians, whilst this works wonderfully for some shows for me I wanted my Nuns giving it their all for the fabulous choreography rather than being distracted from their booty shaking by playing the trumpet, but that comes down to personal taste and that being said everyone on stage absolutely excelled at both.

On at the Palace until Saturday 3rd September