First published back in 1813, Jane Austen’s Pride and Prejudice marks the return of Regent’s Park Theatre to The Lowry for a third time following their hugely popular visiting productions of To Kill a Mockingbird and Lord of the Flies.

Austen’s classic comedy tells the much-loved story of the Bennett family and their five unmarried daughters. Mr and Mrs Bennett soon see an opportunity to rise through the ranks of society when the wealthy and devastatingly handsome Mr. Bingley and his friend, fellow eligible bachelor, (and even more wealthy) Mr. Darcy arrive in the area. The Bennet’s eldest daughter Jane soon catches the eye of Mr Bingley while the brooding Mr Darcy clashes with the Bennet’s feisty second daughter, Elizabeth, despite this, their paths are destined to repeatedly meet.

Adapted for the stage by Simon Reade and Directed by Deborah Bruce, the creative team have worked their magic on this production, delivering a bright and joyful reworking of Austen’s wonderful comedy. Set Designer Max Jones has created a remarkably effective revolving structure which works wonderfully well and allows the cast to glide with ease from the Bennett’s parlour at Longbourn to the grandeur of the ballroom at Netherfield Park. 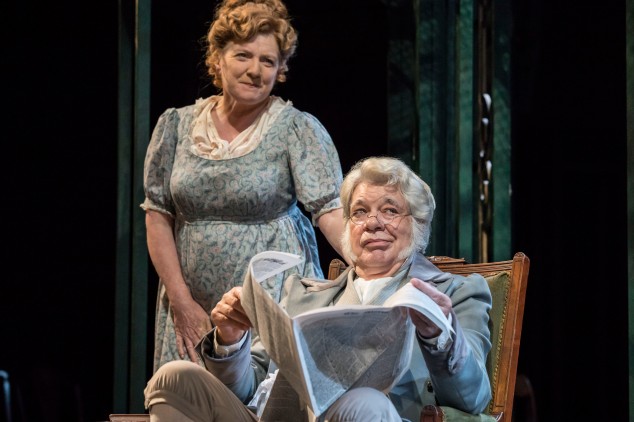 Both opening and closing this production is the delightfully dramatic Mrs Bennett announcing “It is a truth universally acknowledged, that a single man in possession of a good fortune must be in want of a wife.” Played by Felicity Montagu, this role couldn’t have been better cast; she is everything you’d wish for in a ‘Mrs Bennett’, brash, attention-seeking, uncouth and ridiculously excitable. Her shameless attempts to get her daughters married off are hilarious; Montagu was made for this role and carries it off to perfection. In contrast to Mrs Bennett is the reserved, thoughtful and long suffering Mr Bennett, played wonderfully by Matthew Kelly, he is the calm to Mrs Bennett’s storm, the pairing of the two actors is a delight to watch.

The five actresses playing the Bennett girls each offer something different and ensure that each sister has their own strong identity and characterisation, amazingly several of the girls are making their professional debuts. Tafline Steen who takes on the tough role of Elizabeth does so with ease, she is sublime. Feisty and passionate, and just as headstrong and determined as Austen wrote her. Steen’s performance is outstanding, an actress no doubt headed for big things, she is truly exceptional. 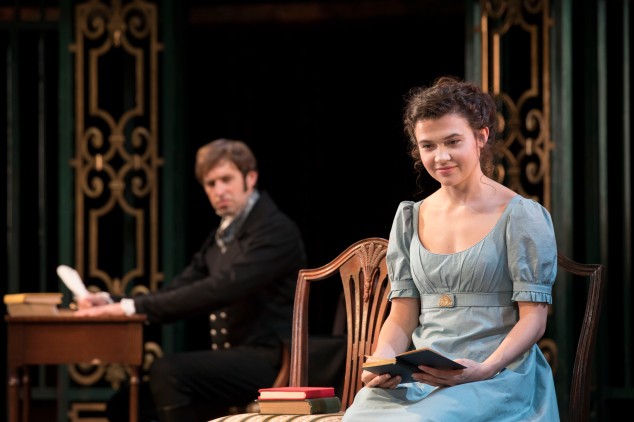 Her clashes with Mr Darcy, played by the broodingly handsome Benjamin Dilloway are realistic and believable; the change in her emotions is moving to watch. Mr Darcy is another hard role to deliver, a fine balance to get right, by Act II we see Dilloway convey the warmer side of Darcy that Austen’s reader adore and yearn for and the side ultimately we knew was there all along . Special mention must go to Steven Meo with his riotous interpretation of Mr Collins the clergyman, irritating, try hard and totally nauseating, the last person you’d ever want around, he is hilarious, utterly brilliant to watch. Also praise for Leigh Quinn who takes on two roles, Mary Bennett and Annabel De Bough, although smaller roles she absolutely shines in each.

Pride and Prejudice is a classy production, accessible and fresh. An complete joy for Austen’s fans, it’s also is the perfect introduction to those dipping their toe for the first time. Delightfully entertaining with laugh out loud moments and a superb cast, an absolute must see!

On at The Lowry until Saturday 15th October