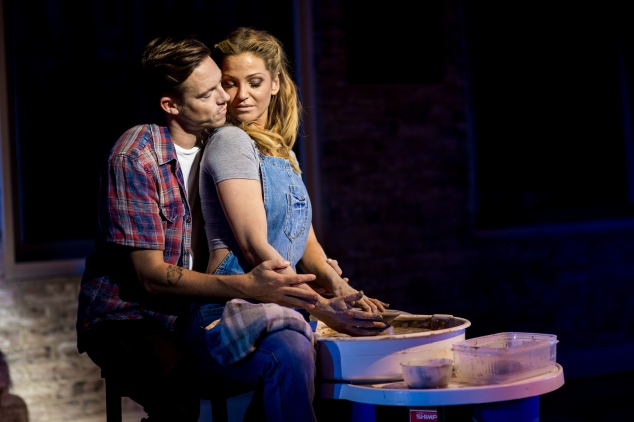 Based on Bruce Joel Rubin’s 1990 smash hit film starring screen legends Patrick Swayze, Demi Moore and Whoopi Goldberg, and following the original musical interpretation which premiered at Manchester’s Opera House back in 2011, Bill Kenwright brings his new production of Ghost the Musical to the Palace Theatre.

With music by Eurythmics’ Dave Stewart, and lyrics from Grammy Award winner Glen Ballard (whose previous credits include Alanis Morrissette’s album Jagged Little Pill) Ghost tells the story of young, loved up New Yorkers Sam (Andy Moss) and Molly (Sarah Harding). Sam is tragically murdered in the street in a robbery gone wrong, which we soon learn was organised by his close friend and work colleague Carl (Sam Ferriday). As Sam takes his last breaths he soon realises he has become stuck between two worlds, ripped away from his love too soon he realises she too is in danger and he must find a way to connect and protect her. This connection comes in the form of Oda Mae Brown (Jacqui Dubois) so called psychic and spiritual healer, or more accurately fraudster and dodgy dealer.

Harding has come under heavy criticism for her performance in the role, most notably in the opening stops on the tour, but I’m happy to say Manchester’s audience welcomed her with open arms and she gave a touching and enjoyable performance. At times her acting was a little breathy but there is no denying she has a sweet and soulful voice and the chemistry between her and Andy Moss was moving. Fair play to her for getting up on stage night after night when even the most confident of us would be hiding under a blanket eating a vat of ice cream if we’d had even half of the criticism she’s received. She has clearly worked hard to improve her performance and is determined to silence her critics.

Andy Moss makes for a very likeable and playful Sam making his death seem all the more tragic, his commitment to protecting Molly from danger is moving and his interactions with Oda Mae (Jacqui Dubois) are brilliant. Moss portrays Sam’s highs prior to his death with warmth and excels when the lows of the afterlife take hold. Dubois was born to play Oda Mae Brown, if ever they remake the film she should be first in line at the auditions, outrageous, hilarious and full of sass, she shines in this production and her fun interactions with both Sam and Molly are a joy to watch.

With a strong supporting cast including a fine performance from Sam’s sly former friend Carl (Sam Ferriday) Ghost is a highly entertaining show, with beautiful music and some clever effects you’ll laugh, quite possibly cry and definitely come away from the production wishing you’d kept up with those pottery classes!

On at the Palace Theatre until Saturday 29th October, tickets available here!