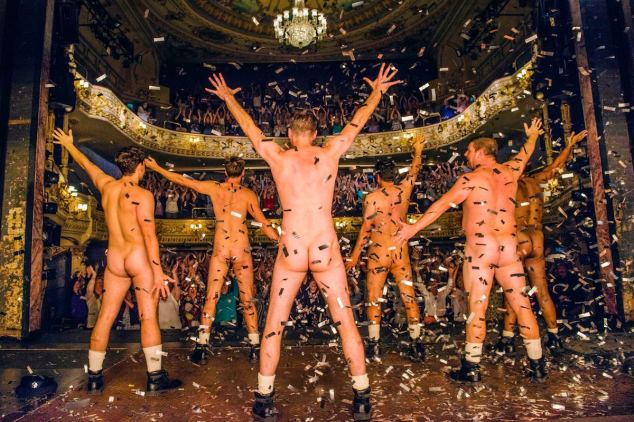 The Full Monty arrived back in Manchester this week and judging by the whoops and excited cheers from the audience when Gary Lucy and Co take to the stage their return is very welcome.

Adapted from Simon Beaufoy’s 1997 film of the same name, The Full Monty tells the story of six out of work Sheffield steel workers, bored, broke and battling various issues of their own.

Gary Lucy as Gaz is behind on his child maintenance, his custodial problems worsening by the day. Best mate Dave’s (Kai Owen) confidence is rock bottom and his relationship with wife Jean (Liz Carney) is suffering. After stumbling upon a Chippendales night at the local social club Gaz sees an opportunity to earn a quick buck and hopefully prove to son Nathan (Fraser Kelly) he’s not a complete failure.

Right from the off it’s clear what the audience are here for; they want a reet good laugh and of course ‘that’ infamous scene at the end of the show. Each teasing flash of flesh is lapped up as this story familiar to many begins to play out. Fans of the film will be glad to know the adaptation has been respectfully done, characters remain the same ones they fell in love with back in the 90’s and the northern witty one-liners come thick and fast.

Designer Robert Jones has translated the industrial disused steelworks into an effective and efficient set, doubling up as offices, social clubs and performance space with ease.

What starts off as feel-good escapism soon deepens into something more as we see friendships grow, self-respect return and important issues raised. Beaufoy’s script doesn’t shy away from sensitive themes; suicide, sexuality and self-worth are all covered here but done so in a typically northern no-nonsense fashion where problems are faced with a laugh and a joke but at all times a genuine warmth. 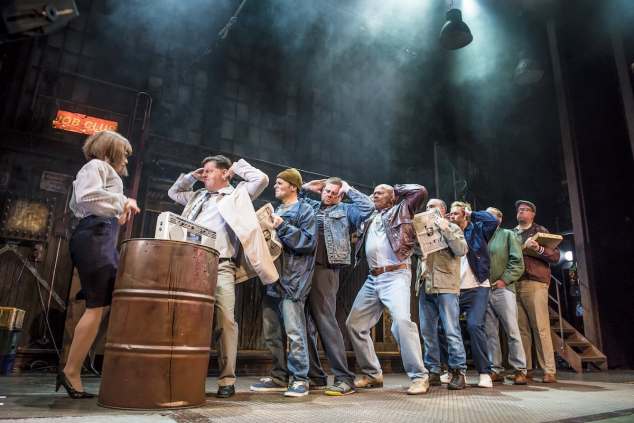 Heading up the cast Gary Lucy is clearly an audience favourite although his accent takes a trip across the Pennines on more than one occasion the audience lap up his cheeky banter as Gaz the Lad. Fraser Kelly as son Nathan is convincing and committed, leading you to question just who is raising who here. Kai Owen as Gaz’s best mate Dave gives a warm and relatable performance while both Joe Gill as Lomper and Andrew Dunn as Gerald shine in their respective roles. Louis Emerick as Horse proves despite a dodgy hip he’s still got the moves while James Redmond as Guy proves he’s packing more than just a girder down there!

The Full Monty is an entertaining night out, a heart-warming story delivered in a fun and feel-good way with more than enough laughs to send you home smiling.