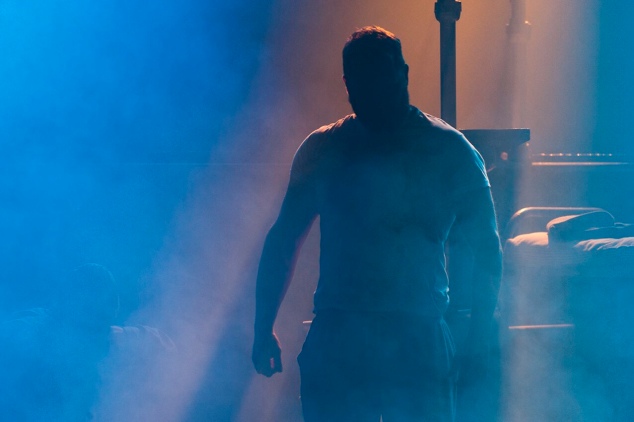 Following on from its success as part of JB Shorts 19, MAP Productions have reworked and extended The Stretch from its original 15 minutes into an hour-long piece as they examine the lasting & devastating impact one moment of madness can have.

We follow Lee (James Lewis) through his long 10 years in prison, joining him on a brutal and soul-destroying journey as he visually charges before us from strong self-assured new kid on the block to defeated & destroyed shadow of his former self, broken by the brutality of life on the inside. 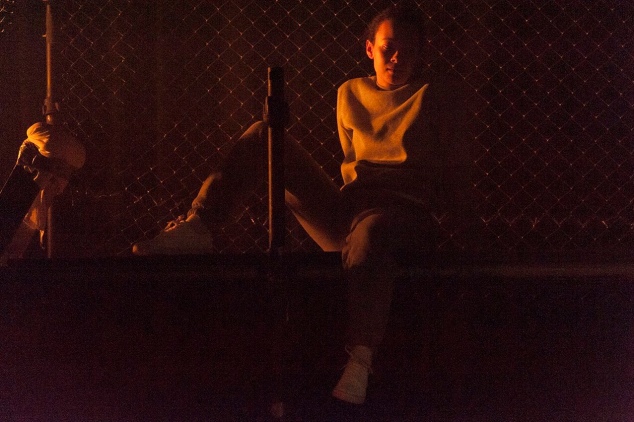 Through atmospheric lighting & inspired design the arches of 53Two have been transformed into a menacing & moody environment adding an almost immersive feel to proceedings. The cast make full use of the multi-layered set, lurking in the shadows as new boy Lee is led in to serve his time before powerfully making their presence known.

Joe Ainsworth’s script is melodic and pacy as with each year that passes hope fades and survival instinct takes hold before the reality of abandonment & isolation takes over. 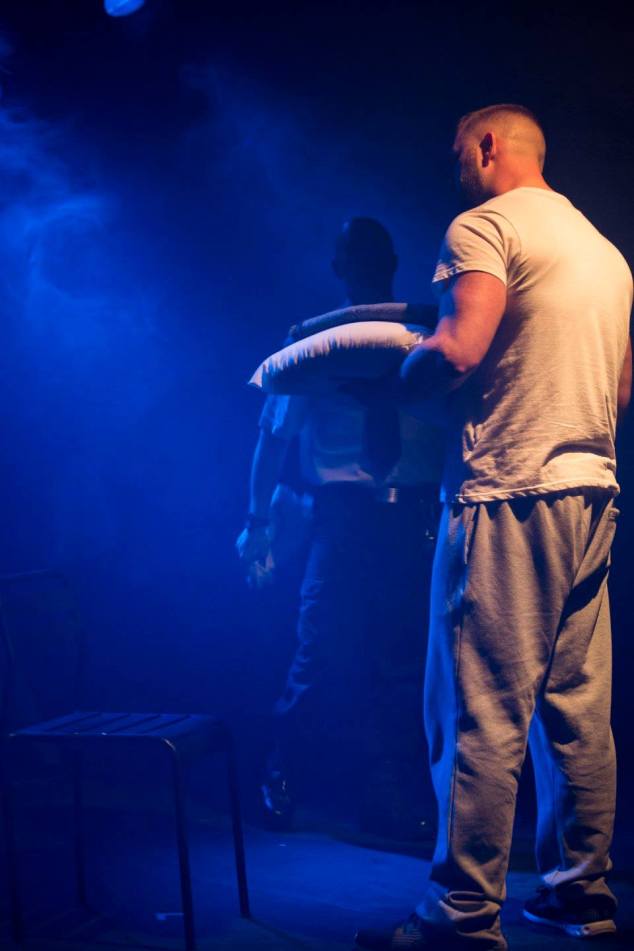 James Lewis gives a superb performance as Lee, honest and real in his portrayal he takes us on an incredibly raw and deeply poignant journey. His measured performance transitions from witty and light to heartbreakingly raw as he becomes increasingly broken by the failing prison system.

The ensemble add depth and authenticity to this production, taking on various roles depicting individuals on both the inside and outside of the prison walls and the impact Lee’s one monumental mistake has on them. 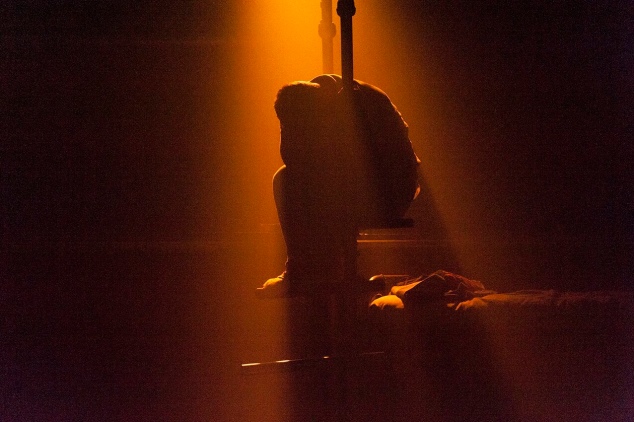 The Stretch offers powerful performances which movingly highlight the tragic repetitive cycles happening daily in prisons around the country if not the world. A brave and honest account of one man’s devastating descent into hopeless institutionalisation. Affecting and important theatre.

The Stretch is on at 53Two until Friday 15th March, tickets available here

Tickets £10 with unwaged tickets available for every performance. Please bring proof of being in receipt of Universal Credit, Job Seekers Allowance or Income Support to the box office when collecting tickets. 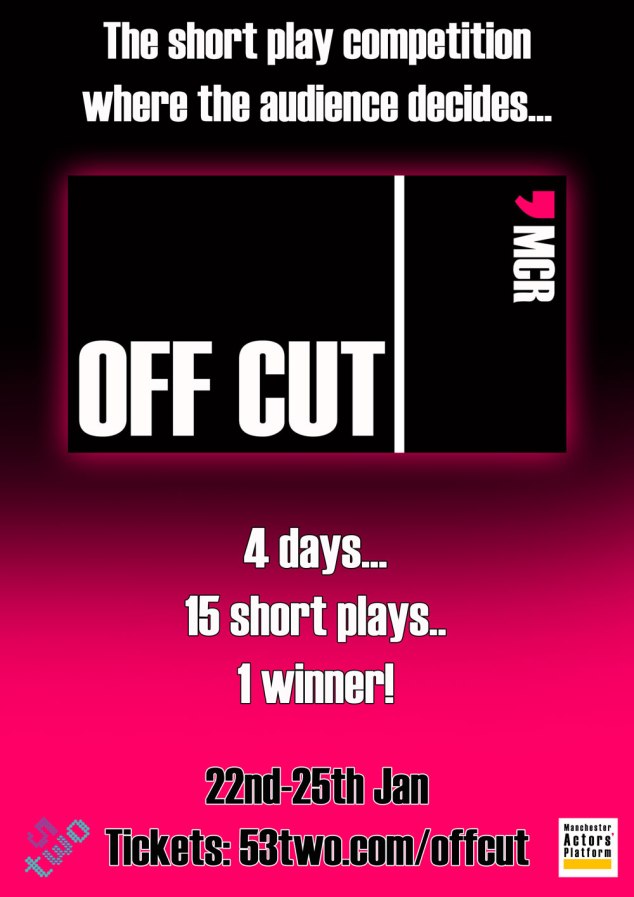 If you want to see the finest in new short plays where you as an audience member can influence which winners will be offered the opportunity to develop their piece into a fully-staged production with Manchester Actors’ Platform then get yourself down to 53two this week.

For five years, the Off Cut Festival has been one of the UK’s most successful platforms for undiscovered writing, acting and directing talent, the festival now has a new northern home and takes place between 22nd and 25th January.

Over the past few weeks, 15 brand new short plays from writers around the country have been rehearsed and reworked by Manchester’s finest up-and-coming directors and actors, ready to be performed to audiences over three nights. They will be shown over three nights with five plays performed each night, the audience will be asked to vote for their favourite plays each night. The top two from each group will then go through to be performed again on the last day of the festival, Saturday 25th January. The audience will then vote on the plays again alongside a panel of industry professionals who will also be selecting their favourites to decide the winner.

Producer Simon Naylor from Manchester Actors’ Platform and FOUNDation/53two said “OFFCUT fills a hole that has long been empty. It embraces all of the qualities we strive for in independent and fringe theatre and provides the perfect platform to showcase and launch careers alongside celebrating the brilliant spirit and bond that this city has.”

The performances have been broken down into the following groups

The Fish and the Sea by Jeff Nolan

Born on the Right Side by Maddie Wakeling

Here We Are by Anne Price

There’s a Fly in My Room by Rachel McMurray

To Sleep by Stephanie Lacey

The six plays, chosen by the audience over the previous three nights, are performed again. From them, the winner of the Audience Award for Favourite Play will be developed and fully-staged at 53two.

Tickets are £8 per show

Unwaged tickets at £2 available every 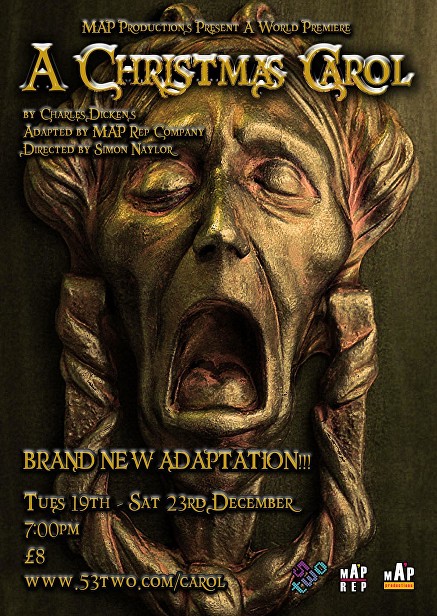 Panto season is in full swing at this time of year, but fairytales and jolly japes aren’t everyone’s cup of tea, so if you’re looking for something a little different to get your festive juices flowing, then the MAP Repertory Company’s take on A Christmas Carol offers the perfect alternative.

Charles Dickens’ A Christmas Carol, has made captivating reading for young and old alike for just short of 175 years when the novel was first published in 1843. There have been countless film adaptations of this classic tale,  all offering something a little unique and this version is no different.

Told with various cast members acting as narrator, we are introduced to Mr Ebenezer Scrooge and his dutiful, down trodden  employee Bob Cratchit as they are busy working on Christmas Eve. We get a look into the blackheart of Scrooge as he berates his employee for want Christmas Day off, as well as mocking his nephew Fred, for his merriment and positive outlook  over the festive season. What follows is Scrooge’s road to redemption as he encounters four spirits who look to save the old misers soul before it’s too late.

This is a highly original attempt at this old classic that doesn’t always hit its mark but is a great deal of fun regardless. The cast all work their socks off playing muliple roles and are clearing having a ball, the show is a blend of music and comedy, with a great deal of joy coming from the introduction of the puppet Tiny Tim. What sets this apart from other productions is the way they used the space at 53Two venue, all aspects are covered with various cast members popping up in the theatre. The soundscope is brilliant especially during the scenes with the ghosts, made all the more immpressive by the limited budget of the play.

With a running time of just under hour, Map rep company have tried to cram as much story in as possible, which doesn’t quite work in parts: the biggest problem being the introduction of the tension between Scrooge and his nephew is left unresolved. In addition Scrooge’s scaving encounter with the charity workers isn’t mentioned until after he has his epiphany: so when Scrooge shows his charitable side it has very little impact as it was seen without context.

This is a fun, smart  show, suitable for all the family that will provide a spring in the step as we march towards Christmas,packed with fine performances, comedy, Christmas  carols and lashings of good cheer it’s well worth watching.

On at 53Two until Saturday 23rd Dec, tickets available here. 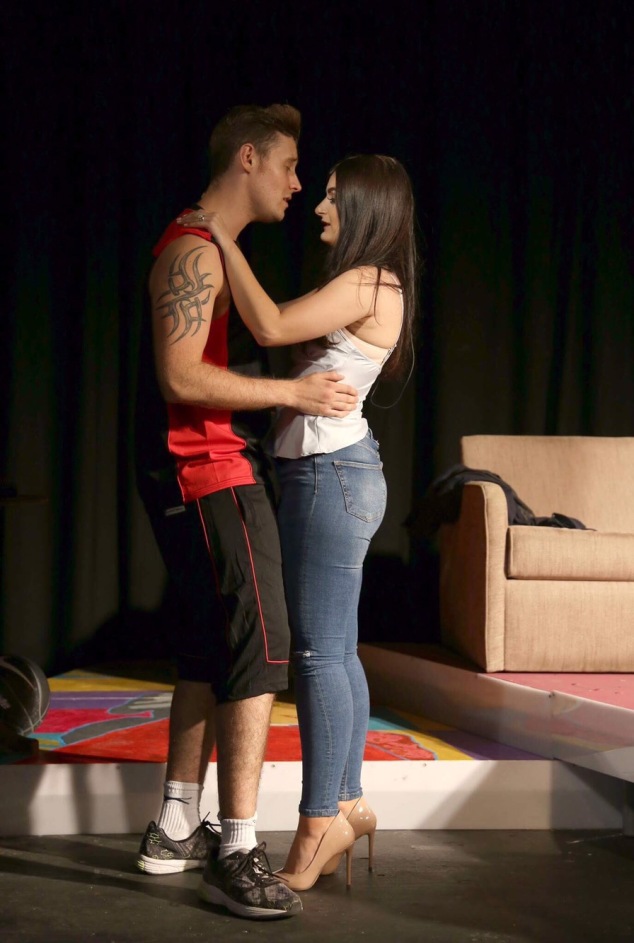 A combination of a musical about the failed marriage of Kim Kardashian and Mozart’s ‘The Marriage of Figaro’ really shouldn’t work but somehow Northern music/theatre duo Leoe & Hyde have created a little piece of magic here, ensuring a monster hit for fringe production, The Marriage of Kim K.

At the centre of the story we have Amelia, (played superbly by Amelia Gabriel) and Stephen (portrayed wonderfully by director and composer of the piece Stephen Hyde), a couple who are poles apart in their ideas on what makes for a relaxing night in front of the TV, something which ultimately affects the harmony of their whole relationship. Amelia will happily watch, and watch, and watch reality TV Queen Kim Kardashain while Stephen’s idea of heaven is immersing himself in the works of Mozart, regardless of whether he understands what is being said or not. 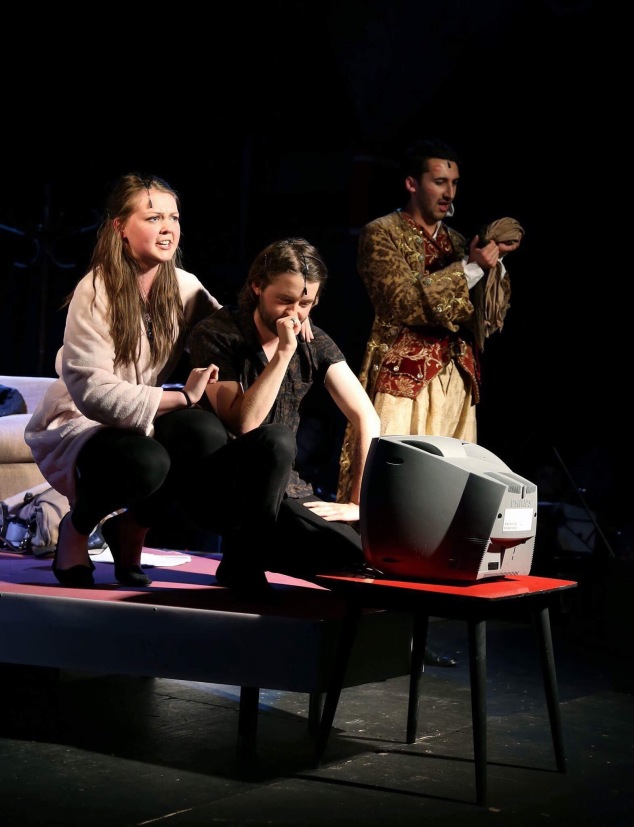 As our couple sit centre stage fighting for control of the TV remote a look into the life of Kim K begins to take place stage left whilst The Marriage of Figaro emerges to our right. The staging of this piece is wonderfully creative, with witty lyrics and outstanding orchestration, sharp observations are played out to great effect.

As Kim (played brilliantly by Yasemin Mireille), becomes increasingly bored of life with Kris (portrayed superbly by the hilarious James Edge) we see perhaps that reality TV isn’t too different from real life as Amelia and Stephen become increasingly frustrated and fed up with each other. Cut to the Marriage of Figaro and life isn’t too rosy here either as Count Almaviva (played by the charismatic and comedic Nathan Bellis) is increasingly testing his Countess (portrayed beautifully by Emily Burnett) with his dalliances and downright bad behaviour. We soon begin to realise that life is pretty similar for us all, whether you’re from revolutionary France, glamorous LA or sat on your sofa scrapping over the TV remote here in the UK. 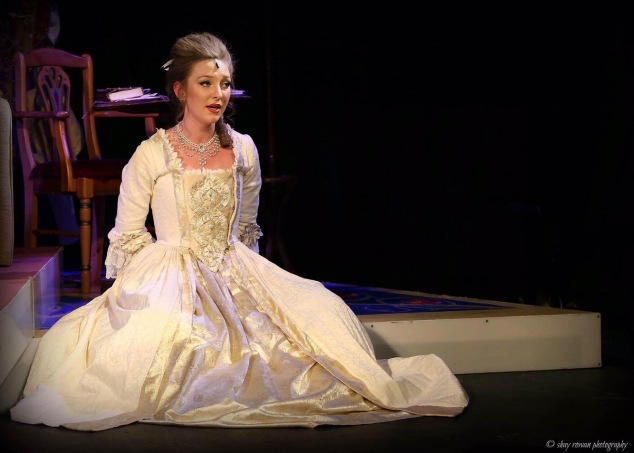 The whole cast deliver outstanding performances, Leoe Mercer has gifted each character with witty and well observed lyrics which offer many laugh out loud moments as we realise just how absurd life can be whether that be as a grand Countess or a struggling composer, and how deep down we’re not so different after all, allowing the three very different stories to perfectly intertwine. The addition of a live orchestra really makes this a stand out piece, Stephen Hyde’s score adapted from Mozart’s The Marriage of Figaro is beautiful and sets perfectly the pace and flow of the on stage action.

Together Leoe & Hyde have created an absolute gem of a show, witty, beautifully crafted and superbly delivered. Book your tickets here www.marriageofkimk.com/tickets.html