The programme states that Spamalot is “lovingly ripped off from the motion picture” of Monty Python and the Holy Grail. Well for my money, this production is doing itself a disservice; if anything it’s enhancing the ‘Python’ legacy and introducing them to a wider audience.

As a Python fan, you sometimes take it as a given that most people will love them and their work as much as you do. However that’s not always the case, as some people just “don’t get it” or have never seen the Python’s in action before. For die-hard fans like myself, the nay-sayers and the unacquainted, Spamalot is the perfect night out, suitably ridiculous, occasionally bewildering, but always hilarious!

Following the plot of the film, Spamalot sees King Arthur and his faithful servant Patsy, as they attempt to enlist various brave and not so brave knights to join him at his court in Camelot. It is here that the voice of God or, more accurately Eric Idle, send Arthur and his Knights on a quest to seek out the Holy Grail.

As you would expect it’s absolutely bonkers: most of the set-pieces are in there, from The Knights who say Nee and Black Knight: with the welcome addition of a new character in the Lady of Lake.

The cast are on great form: Bob Harms is excellent as the pompous, self-absorbed King Arthur, Rhys Owens is on equally good form as Patsy, a polar opposite to his master but certainly the brains of the outfit. Sarah Harlington offers a scene stealing turn as the Lady of the Lake, who has an equally inflated opinion of herself, similar to that of King Arthur.

They are supported by a fantastic, hard-working cast with most taking on multiple roles, who are all given their moments to shine. Standout scenes include Jonathan Tweedie’s Lancelot and his daring rescue of Prince Herbert and the cast’s spectacular Knights of the Round Table routine. 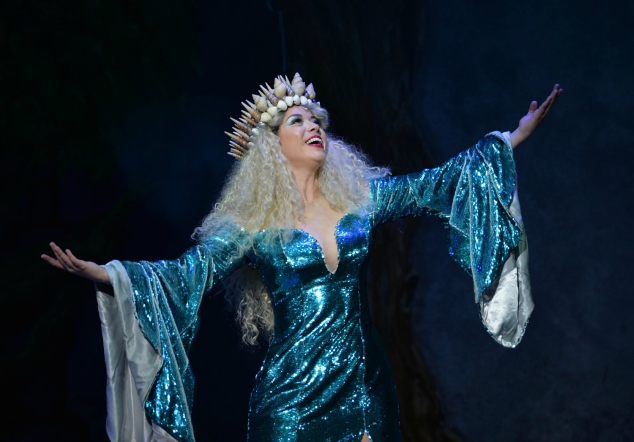 Eric Idle, along with John du Prez have come up with catchy and funny tunes that aren’t strictly in keeping with the show. The Song That Goes Like This takes a much-needed swipe at musicals and their big defining tunes, whilst You Won’t Succeed in Showbiz, takes a well-aimed shot at celebrity culture and has been updated with numerous topical references. In addition, there is the über-camp His Name is Lancelot and of course the old faithful Always Look on the Bright Side of Life. However, it’s Sarah Harlington’s vocals on Whatever Happened To My Part? and her duet with Norton James in Lady of the Lake that really bring the house down. Harlington’s voice is phenomenal: so much power blended with her comic timing certainly make you wish her part was that bit bigger.

Director Daniel Buckroyd has certainly got the best out of his cast, with all involved displaying a gift for comedy, and allowing room for a spot of adlibbing as well.  Some cast members just about managed to told hold it together, which really added to the fun of it all.

I really can’t fault this wonderful show. It has everything you would want in a musical: silly, uplifting fun, catchy tunes and a sing-a-long, to boot. You really can’t ask for more. Spamalot is currently on a nationwide tour and is well worth catching when it comes to a theatre near you. 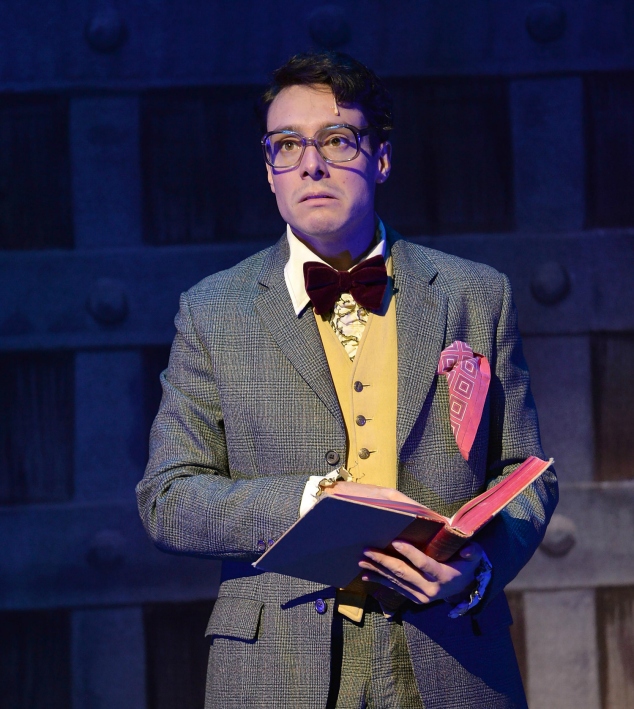 Selladoor Productions in partnership with Mercury Theatre Colchester bring their new production of award winning musical comedy Spamalot to Blackpool this week, the first stop on its 2017/18 UK and Korean tour.

Telling the tale of King Arthur and his Knights of the Round Table and adapted from the 1975 film ‘Monty Python and the Holy Grail’ Spamalot is chock-full of mayhem, madness with laughs a plenty. Written by Python legend Eric Idle and winner of the 2005 Tony Award for Best New Musical, Spamalot continues to entertain audiences with its bonkers brilliance and superb score.

Bob Harms takes on the role of King Arthur and is accompanied by trusty sidekick Patsy (Rhys Owen). The two make for a fine paring, delivering many of the comedy highlights of the show, they are endearing, daft and very, very funny, causuing chaos and much confusion wherever they go.

This production really highlights the genius of Monty Python and will delight both fans of the original film as well as newcomers to the piece. There are corpses who refuse to die, ferocious Frenchmen, a Black Knight who is determined to fight to the end despite losing all his limbs, and the brilliantly bonkers Knights who say Ni for whom only the gift of shrubbery will suffice. There have been a few slight tweaks to keep it up to date and relevant to the 2017 audience which are cleverly interwoven with the original production, offering Stephen Arden, as Sir Robin, a great opportunity to deliver plenty of laughs in his rendition of ‘You Won’t Succeed in Showbiz’

Sarah Harlington is brilliantly cast as the Lady of the Lake, her duet with Sir Galahad (Norton James) singing audience favourite ‘Song That Goes Like This’ is laugh out loud funny, add to this her hilarious rendition of ‘The Diva’s Lament’ and she’s pretty much guaranteed her standing ovation at the end of the show, her voice is beautiful, her comedic timing superb.

Huge praise must go to each and every member of the cast; they’re incredibly hard working and look like they’re having as much fun up on stage as the audience are having watching. With great direction from Daniel Buckroyd, Spamalot is a great fun production from start to finish, ending with the ever popular ‘Always Look On The Bright Side Of Life’ you’ll leave the theatre grinning from ear to ear.

For tickets and tour details head to www.selladoor.com/productions/spamalot