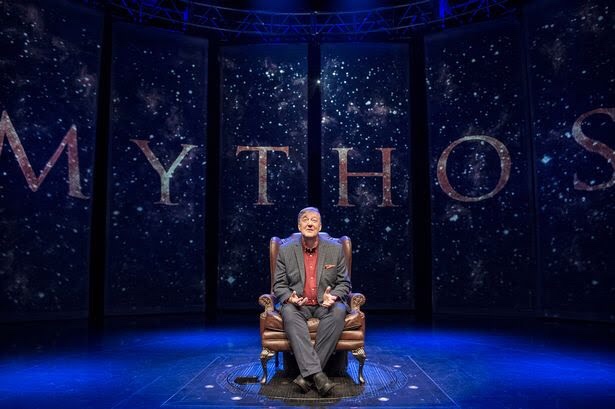 Fresh from taking the Edinburgh Fringe by storm, Stephen Fry brings his one-man trilogy to the Lowry as part of his first UK tour in almost 40 years.

Mythos: A Trilogy based on his best selling books Mythos and Heroes allows Fry to focus on a different subject matter in each of the three shows starting firstly with Gods, then secondly Heroes before thirdly and finally taking on Men.

Effortlessly charming and unquestionably entertaining Fry weaves through the history of Greek mythology right from the origins of the Ancient Greek Gods all the way through to the realisation that mortal man had progressed so far that perhaps the glorious Gods who’d ruled with such majestic power were no longer needed. Each and every story is packed with brilliant and witty observations as the Great Gods are brought to splendid and spectacular life. 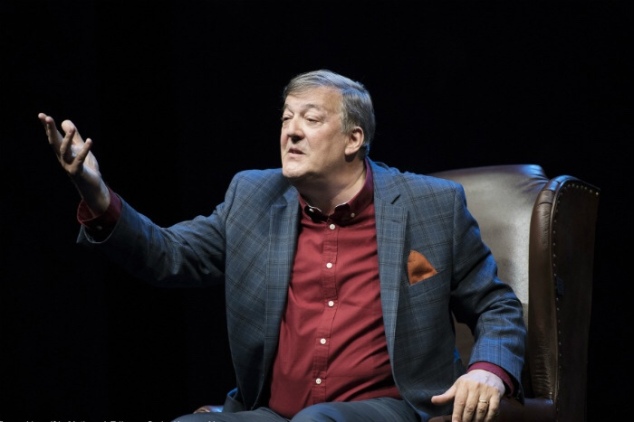 Sitting centre stage on a throne-like leather armchair, Fry, a natural storyteller draws his audience in as though huddled round a campfire: his knowledge and enthusiasm bursting to be shared. Large screens surround him as projections of animations and classical paintings play out.

Stories roll off Fry’s tongue captivating the audience while delving deep into the origins of the Greek Gods. The names of the Original 12 Gods, their children, their cousins, heroes, creatures and mortals are reeled off effortlessly as Fry adds depth to his delivery with witty anecdotes and entertaining ad libs.

Stories are made accessible with Fry designating regional accents to the various individuals and comparing their personalities to modern day references, Heracles for example is a Brummie while Titan is described as being a “bit of an emo”.

As well as Fry’s captivating storytelling he adds various interactive elements to each show firstly in the form of the ancient version of trivial pursuit, in this case ‘mythical pursuit’. Audience members are invited to pick a subject from which Fry regales the listeners with interesting facts about said subject. In addition to this Fry opens up his oracle during the interval giving audience members an opportunity to email their burning questions in the hope of Mr Fry selecting theirs for discussion at the start of Act II. Sadly on this occasion even the oracle was stumped when the word Brexit emerged.

Wonderfully this Herculean sharing of what can only be described as an encyclopaedic knowledge never feels overwhelming or inaccessible. Fry’s warm and playful nature ensures every audience member feels part of this mythological ride and will leave the theatre armed with both a huge respect for the ancient Greeks and plenty of interesting facts to wow their friends and family with thus achieving Fry’s aim of returning to a storytelling society.

Mythos: A Trilogy covers all bases, there is love, war, heroism and devilment, with each and every story told with passion and joyful delight. The ancient is brought to wondrous life in this epic trilogy of olympic storytelling we have just one request: please Mr Fry don’t leave it another 40 years.

Mythos: A Trilogy can be seen at various locations across the country further information can be found here.