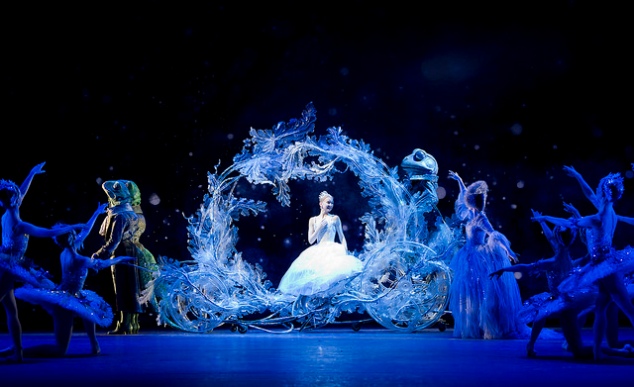 Birmingham Royal Ballet triumphantly returns to the Lowry with David Bintley’s magical production of the classic and much loved fairy-tale ballet, Cinderella. Originally performed in 2010 and broadcast by the BBC as their 2010 Christmas ballet, Bintley’s award winning production features the complete original score by Russian composer Sergei Prokofiev delivered superbly by the Royal Ballet Sinfonia. Staying true to the Cinderella story, we meet the wicked stepmother, Cinderella’s two ugly sisters (who we of course love to hate), as well as the handsome prince and not forgetting her magically gifted fairy Godmother.

We begin in the dark and dank depths of Cinderella’s kitchen dwelling where a bare foot Cinderella has been cast by her wicked stepmother and ugly sisters, her only purpose in life seemingly to serve them. Despite the bleak and depressing surroundings Jenna Roberts ensures Cinderella shines and her joyous and delicate performance is enchanting. She moves with poise and perfection, light on her feet and full of endearing charisma.

The story telling in this production, as with all Birmingham Royal Ballet productions is wonderfully clear allowing for a beautifully paced performance where we move effortlessly from one piece to the next, eager for more. Complimenting this exceptional narrative is an impressive set and deliciously extravagant costumes both designed by John F. Macfarlane, familiar to audiences as designer of the BRB’s hugely popular Nutcracker. The excellent narrative also allows for some great comedy acting from Skinny (Samara Dowes) and Dumpy (Laura Purkiss), the ugly sisters. Both excel in their roles and their acting is wonderful, offering the audience laugh out loud moments each time they enter the stage they are a fantastic fun and absolutely adored by the audience.

Perfectly partnering Jenna Roberts’ Cinderella is handsome Prince, William Bracewell. Strong and athletic Bracewell is perfection in the role and the two of them glide beautifully together, their pas de deux performed at the grand ball is utterly mesmerising, they delivery of Bintley’s choreography is precise and striking. As the clock strikes twelve the dreamlike scene begins to crumble as Cinderella dashes from the scene leaving only her sparkly slipper, cue a highly entertaining hunt for the wearer of the shoe.

Birmingham Royal Ballet succeeds once more in making a production which is not only enchanting and utterly thrilling but accessible and appealing to all. It is wonderful to see a diverse audience from very young children to those senior in age all totally captivated by this stunning production.

Cinderella is a work of magic, enchanting and sublime, an absolute delight.

On at The Lowry until 4th March

One thought on “BRB – Cinderella”