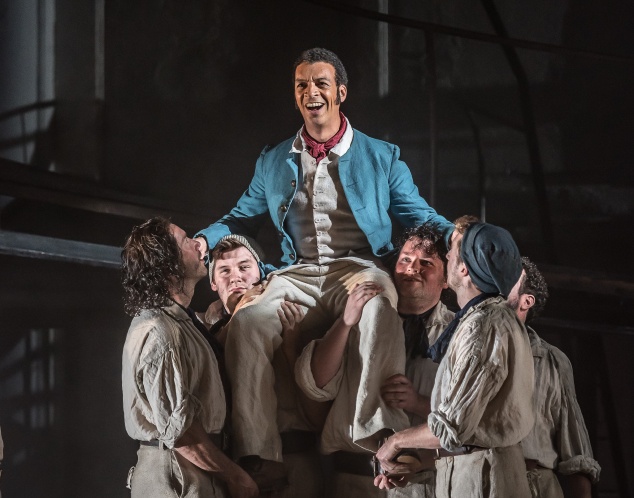 The good ship Opera North has sailed into Salford Quays with its stellar performance of Benjamin Britten’s ‘Billy Budd’ – a tale of high drama on the high seas aboard The Indomitable.

Ensconced in the bowels of The Lowry, with a superb view of Leslie Travers’ ‘handsome’ set, you are immediately transported back to 1797 by Captain Edmund Fairfax Vere (Alan Oke) – reflecting on the arrival of Able Seaman Billy Budd (Roderick Williams), who has been pressganged into joining the fight against the ‘Frenchies’.

Uncommonly beautiful – and possessing a disarming goodness – Billy endears himself to all classes of men… except the dastardly Master-at-Arms John ‘Jemmy Legs’ Claggart (Alastair Miles). Recruiting the services of a reluctant Novice (Oliver Johnston), whose spirit he has broken by a brutal flogging, cruel Claggart plots Billy’s downfall with a maniacal zeal… 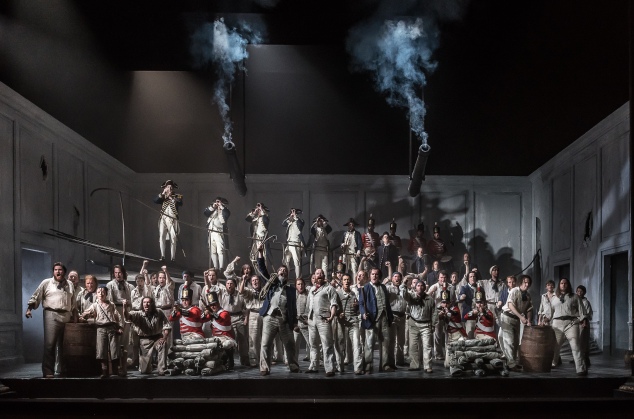 The stage is set for a titanic clash of good and evil, as The Indomitable presses on into enemy territory through a cloak of mist – a fitting metaphor for Captain Vere’s clouded conscience as he presides over the climatic court hearing to determine Billy’s fate.

An immersive, dramatic tale with themes that are as enduring as the classics Captain Vere frequently calls to mind, ‘Billy Budd’ is stupendously entertaining – an affecting character study of the intrinsically good, the duplicitously evil and the tormented adjudicator.

London tenor Oliver Johnston’s depiction of the wretched Novice is worthy of individual praise for the haunting inflection he lends to every perfectly-pitched note. Crouched face-down, bloodied from flogging and shrouded by the threat of his own demise, he is mesmeric – offering a sensitive counterpoint to the frequent bluster of the ranking commanders he serves.

Roderick Williams, as the titular Billy Budd, is effused with the requisite air of unsullied innocence – boasting all the likeability of the character he inhabits. Sitting alone, illuminated by a sole spotlight, he is particularly memorable – taking the audience by the hand on his journey from sorrow through to noble acceptance of his fate.

Beautiful to look at, in the style of a Renaissance painting, the ensemble segments offer a wonderful opportunity to appreciate Leslie Travers’ costumes – a palette of muted greys and creams enlivened by the blues, golds and reds of the officers’ jackets – while the masterful lighting design of Thomas C. Hase brings the pared-back set dramatically to life with every developing plot twist.

Of course, the musical brilliance of the show is underpinned by the accomplished orchestra, conducted by Garry Walker and led by David Greed, who became (at that time) the youngest leader in the country when he joined the Orchestra of the Opera North in 1978; also, the chorus, which has been restored to its full complement of 36 full-time members (no small feat in the challenging financial climate the arts face). A much-deserved ovation as the curtain came down marked the audience’s appreciation.

Director Orpha Phelan last worked with Leslie Travers on Bellini’s ‘I Capuleti e i Montecchi’ in 2008. Together, they can feel very proud to have created a wonderfully entertaining and visually stunning rendition of ‘Billy Budd’ – a quarter of a century since it was last staged by Opera North. 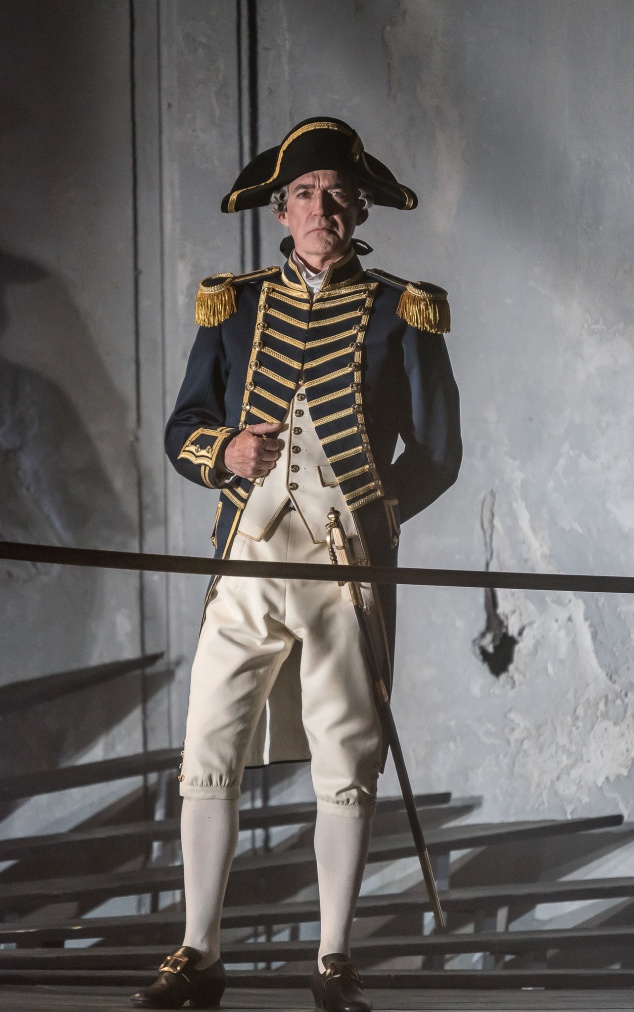 Sang in English – with subtitles for the deaf, deafened and hard of hearing – this is an extremely accessible performance that both novice and veteran opera-goers can enjoy alike.

‘Billy Budd’ will next be staged at The Theatre Royal in Nottingham on 17 November at 7pm. Click to book: https://www.operanorth.co.uk/productions/billy-budd