When Matthew Bourne’s New Adventures premiered The Red Shoes in 2016 it stunned audiences and critics alike, winning two Olivier Awards as well as the LA Critics’ Award for both choreography and set and costume design. Returning for 2019 this breathtakingly beautiful piece of theatre proves to be as timeless a classic as ever.

Based on the 1948 Powell and Pressburger film which drew it’s inspiration from Hans Christian Andersen’s story The Red Shoes this perfectly paced production is rich in indulgent theatricality, sweeping you up on a joyous, heart-wrenching, mesmerising journey from the moment Benard Herrmann’s stunning score with orchestrations from Terry Davies begins. 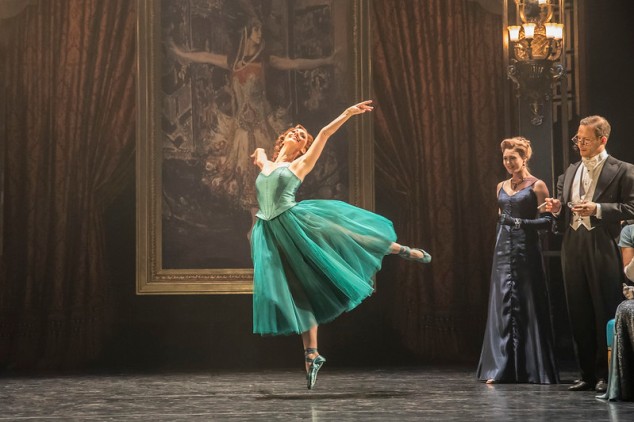 The Red Shoes tells the powerful story of young ballerina Victoria Page (Ashley Shaw) who swiftly rises to the position of principal dancer after her recent arrival at an established ballet company. Her success brings her to the attention of both composer Julain Craster (Dominic North) and also that of the dance company’s powerful impresario Boris Lermontov (Adam Cooper). With the first there is a genuine truth and innocence with the second the lure of higher artistic achievement pulls like a magnet, which ignites a battle between ambition and true love.

Ashley Shaw makes a welcome return to the role of Victoria Page a role she originated in 2016; her performance feels entirely authentic as she weaves her way through a whole spectrum of emotions capturing euphoria and bliss just as convincingly as she portrays terror and furious anger. This authentic emotion paired with her exquisite technique and precise delivery is nothing short of magnificent, embodying the young dancer to perfection. Her performance during The Ballet of The Red Shoes is mesmerising as she is firstly enthralled by then ultimately captured by the shoes, she tells the story movingly and with her whole being.

Adam Cooper’s Boris Lermontov is strong and domineering, seductive in both his power and precision, he stalks the stage bringing an ever-present feeling of temptation and danger while Dominic North’s portrayal of struggling composer Julian Craster is a joy to watch, his solo piece in Act One develops a strong characterisation which he maintains superbly throughout

Bourne’s skilful storytelling and his unbeatable attention to detail matched with a company of dancers at the absolute top of their game ensures that this production enthrals entirely. From playful scenes on the French Riviera to intensely passionate duets every element of choreography is slick, masterful and exciting while every single person on stage gives an impressive and fully developed performance. It is such a visual treat almost cinematic at times that one viewing doesn’t feel like enough, every scene could stand alone and happily satisfy any theatre goer.

Lez Brotherston award-winning set design is immediately striking and wonderfully effective. Allowing the audience access to both onstage and off-stage scenes via a grand revolving sumptuously curtained frame which almost feels like it pirouette’s before your eyes, drawing you into the very heart of the drama, lit beautifully by Paule Constable.

The Red Shoes is a unique piece of theatre in which every element has been crafted with such love and care that the end result is an unquestionably perfect piece of theatrical magic. Bourne’s wonderfully clear storytelling ensures that anyone dipping their toe into the dance world would find the show accessible while seasoned fans of his work will revel in the thrill of having another dazzling piece to enjoy, a masterpiece!

The Red Shoes is on at The Lowry until Saturday 30th November, tickets available here. 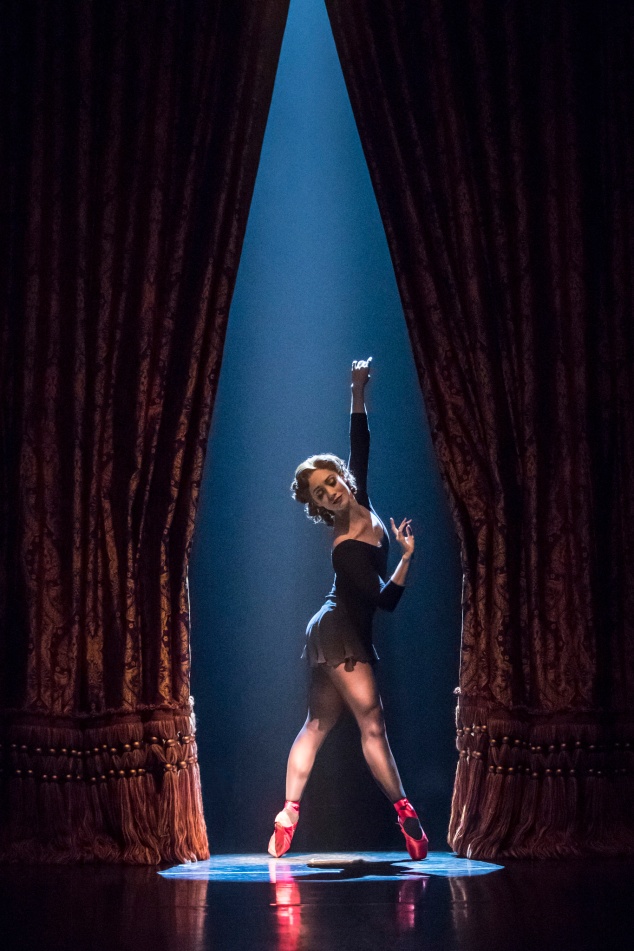 Due to popular demand and for the 1st time in New Advenutres history, Matthew Bourne’s Olivier award winning production, The Red Shoes returns to the Lowry next week for the second time during its current season, offering audiences one final chance to catch the visually stunning and technically sublime production which has captivated audiences since its World Premiere at the Theatre Royal Plymouth in November.

Based on the academy award winning film by Michael Powell and Emeric Pressburger and of course the much loved Hans Christian Andersen fairytale, The Red Shoes tells the story of “Victoria Page”, the girl who yearns to become the greatest dancer in the world.

New Adventures favourite, Ashley Shaw, most recently seen across the UK and internationally as “Aurora” in Matthew Bourne’s critically acclaimed Sleeping Beauty, takes on the role of Victoria and has enchanted audiences with her exquisite and breath-taking talent. The Red Shoes is an utterly captivating and timeless piece, a tale of heartbreak, passion and love as Victoria becomes Principal dancer in the new ballet ‘The Red Shoes’ but finds herself torn between two men, resulting in the most beautifully intense and incredibly emotive performances.

Lifting this already superb production to an even higher level is the stunning new score arranged by New Adventures Associate Artist, Terry Davies using the magnificent music of golden-age Hollywood composer, Bernard Herrmann. The combination of this exquisite theatrical score and breath-taking performances from the New Adventures Company make this a show not to be missed.

After it’s sell-out visit to the Lowry last December The Red Shoes returns for one week only from Tuesday 11th until Saturday 15th July tickets available here www.thelowry.com/events/matthew-bournes-production-of-the-red-shoes