With a book by long standing Sondheim collaborator James Lapine, (Sunday in the Park with George, Into the Woods) plus music and lyrics by the late, great Stephen Sondheim, Passion finds a new home in Manchester’s intimate Hope Mill Theatre with a stellar cast led by musical theatre legend Ruthie Henshall.

Based on the 1981 film, Passione d’Amore, which was inspired by Tarchetti’s 1869 gothic novel Fosca; the story introduces us to Giorgio, (Dean John-Wilson) a handsome young officer who is posted to a remote garrison in the mountains; separating him from Clara (Kelly Price), his married mistress in Milan. Once there, his Colonel’s intense and uncompromising cousin Fosca (Ruthie Henshall) begins a relentless pursuit of him, her obsessive chase as manipulative as it is mesmerising.

Henshall is wonderfully expressive as Fosca, her moments of lunacy and lucidity adding depth to this complex character. She is a tortured soul, her mental anguish leaking into her physicality, wringing her hands & cowering under her shawl one moment, shrieking and wailing the next. Her obsession with Giorgio sends him on a fascinating journey from self-assured soldier to self-doubting shell, as the absurd becomes actuality.

Dean John-Wilson makes an excellent Giorgio and portrays the characters complex transition convincingly. Kelly Price is a wonderful Clara, initially frothy and bright her journey too is compelling.

Director Michael Strassen uses the intimacy of Hope Mill Theatre to its full advantage, the synergy of the ensemble fills the theatre with the most sublime harmonies while the claustrophobia felt by Giorgio feels palpable and close.

Elin Steele’s set and costume design is simple but effective, while Charlie Morgan Jones’ atmospheric lighting brings light and shade to the piece. The five-piece band fit perfectly within the setting with Dan Samson’s sound design ensuring every note is crystal clear.

This is a piece I must confess I knew little about and was not disappointed. The storytelling is strong while Sondheim’s undeniable melodic style is identifiable from the first note. The cast are superb, their star quality ensuring this intense and strange tale never feels too heavy in this lovingly staged revival.

It’s a joy to see this impressive cast in such an intimate setting, they draw you into the emotion of the piece and keep you on your toes. It’s fascinating to see the joyful lyrics about love and happiness transfer from the light and carefree delivery of Clara into Fosca’s intense ownership by the end of the production. Special mention must also go to the ensemble who act as almost narrators at times, in the most perfect of harmony.

Passion is a quality piece of theatre, powerful, dramatic and beautifully crafted.

Olivier Award winner and Musical Theatre icon Ruthie Henshall will lead a reimagining of Stephen Sondheim and James Lapine’s multi-award-winning Passion at the Hope Mill Theatre. Directed by Michael Strassen this revival will reenergise the tale of love, sex and obsession in a new dynamic staging.

Arguably Sondheim’s most lyrical and romantic work, Passion is a legendary musical based on Ettore Scola’s Italian film, Passion d’Amore. Situated in 19th Century Italy, the production tells the tale of a young soldier, Giorgio, who is obsessively pursued by the relation of his superior officer, Fosca – a woman prone to severe melancholy and mania.

Exploring the consequences of intense passion and obsessive adoration, Passion is a ravishing and thought-provoking look at the lengths people go to for desire.

We spoke to Ruthie about the new production, her role and honouring Stephen Sondheim.

Opening Night: Why did you want to play Fosca in this new production of Passion?

Ruthie: The productions I have seen of Passion have never touched me personally in a way that I would have liked them to therefore for me I wanted to find a new way of connecting with it.

ON: Can you tell us a little bit about the role?

Ruthie: I am just discovering her as I go in rehearsals. I’ll let you know on opening night! “

ON: What can audiences expect from Passion?

Ruthie: Phenomenal music by Stephen Sondheim. The man is a professor of the human condition. There is no one better to know how to describe feelings than that man. So you will leave the theatre having been changed in some way.

ON: How are rehearsals going so far?

Ruthie: Very very good. It’s not an easy piece to put together because it’s very complicated. It is  like an opera. However it’s going really really well!

ON: This is one of the first revivals of one of Stephen Sondheim’s shows since he passed away last year – does this make it extra poignant for everyone involved?

Ruthie: Yes it does. It’s makes us feel like we really have to honour Stephen Sondheim. The biggest shame is that he will not get to see this. We will do everything we can to honour his memory.

ON: Are you looking forward to performing in Manchester? And are you familiar with the Hope Mill Theatre?

Ruthie: I spent two weeks in Manchester doing the tour of Fosse and I loved it. It’s a really fun, happening place so I am looking forward to Manchester. I have never been to Hope Mill or seen anything there but their reputation is such that they have become a Donmar Warehouse outside London.

ON: You’ve played some of the most iconic roles in Musical Theatre – from Velma & Roxie to Fantine and Mrs Wilkinson. Are there any roles out there that you’d still really love to play?

Ruthie: I think there are some iconic roles I’ve yet to have played that I would definitely like to play – like Dolly Levi in Hello Dolly and Mama Rose in Gypsy. I think they are right of passage for any older woman so yes I would I like to play those two.

While the West End enjoys a triumphant Sondheim revival in the form of Marianne Elliot’s gender-swap Company, us Northerners can also delight in a Sondheim sensation as Hope Mill Theatre, Aria Entertainment & Neil Eckersley bring us a fabulous festive treat with the cleverly constructed and enormously entertaining Putting It Together.

Set at a festive cocktail party in a Manhattan loft apartment, two couples socialise together while Andrew Gallo acting as narrator observes their interactions & anticipates their unraveling with a knowledgable word to the audience as the story develops.

The very first scene, Invocations and Instructions to the Audience from The Frogs clearly lays this out as a night of pure enjoyment, so sit back, relax & let the remarkable talent of this fine cast paired with the music and lyrics of the mighty Stephen Sondheim entertain you.

The construction of this show taking numbers from several different productions is absolute genius, as songs we know and love are given new meaning while some of the lesser known tracks are given a platform to be heard.

As the lives of the characters mixed with their human complexities intertwine songs are used to great effect to portray the emotional longing of each character. 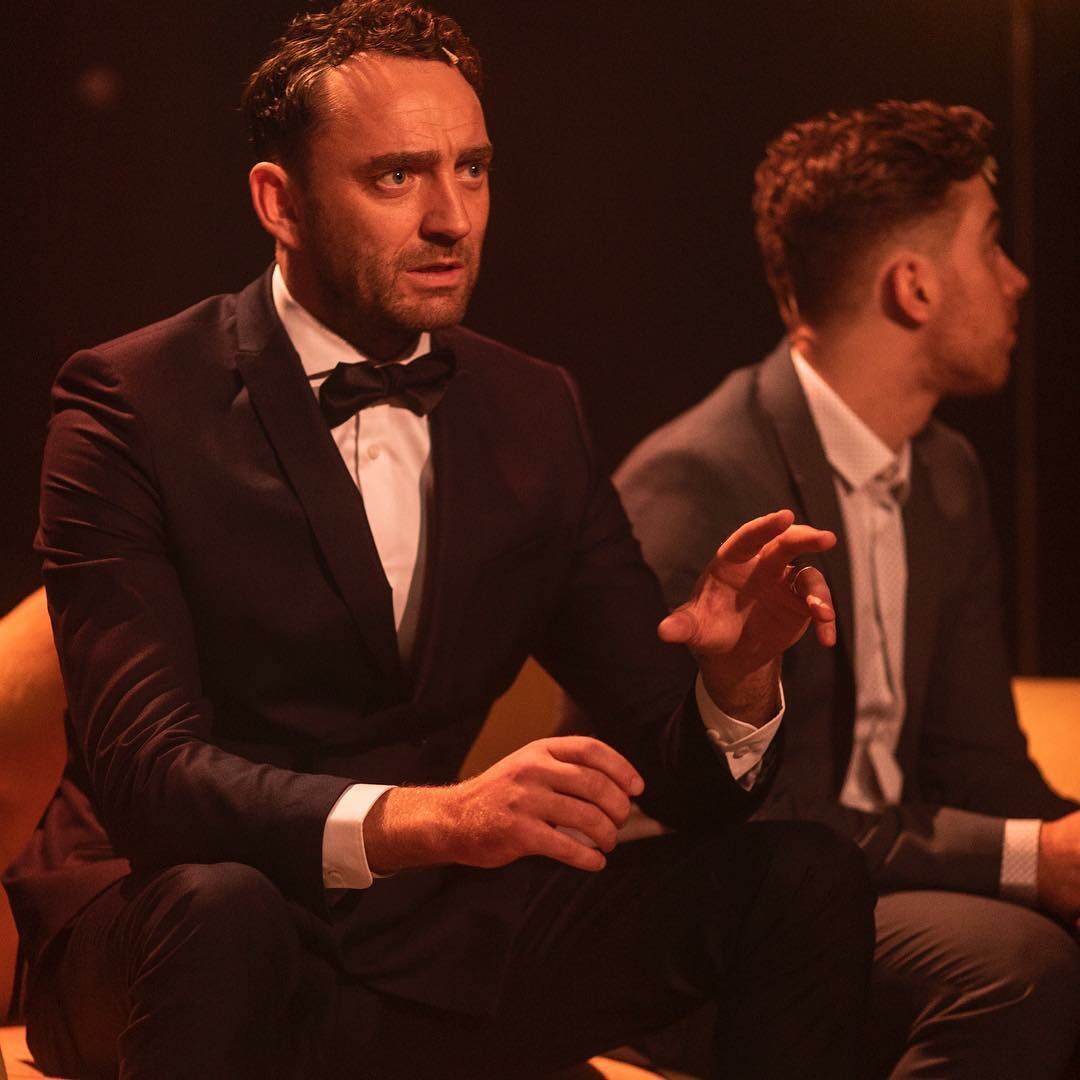 Hello Little Girl from Into The Woods is given a whole new twist as Gavin Jones lusts after Simbi Akande in a daring attempt at seduction while Pretty Women (also from Sweeny Todd) becomes a gentle, tender and touching love song, delivered beautifully by Alex Cardall and Gavin James.

Described as a ‘musical review’ created to showcase Sondheim’s work the plot is never intended to thicken much but this really feels unimportant when you have the opportunity to sit and listen to five stunning actors at the absolute top of their game deliver the most brilliant, beautiful lyrics accompanied by sublime music played on-stage by the enormously talented Michael Webborn. 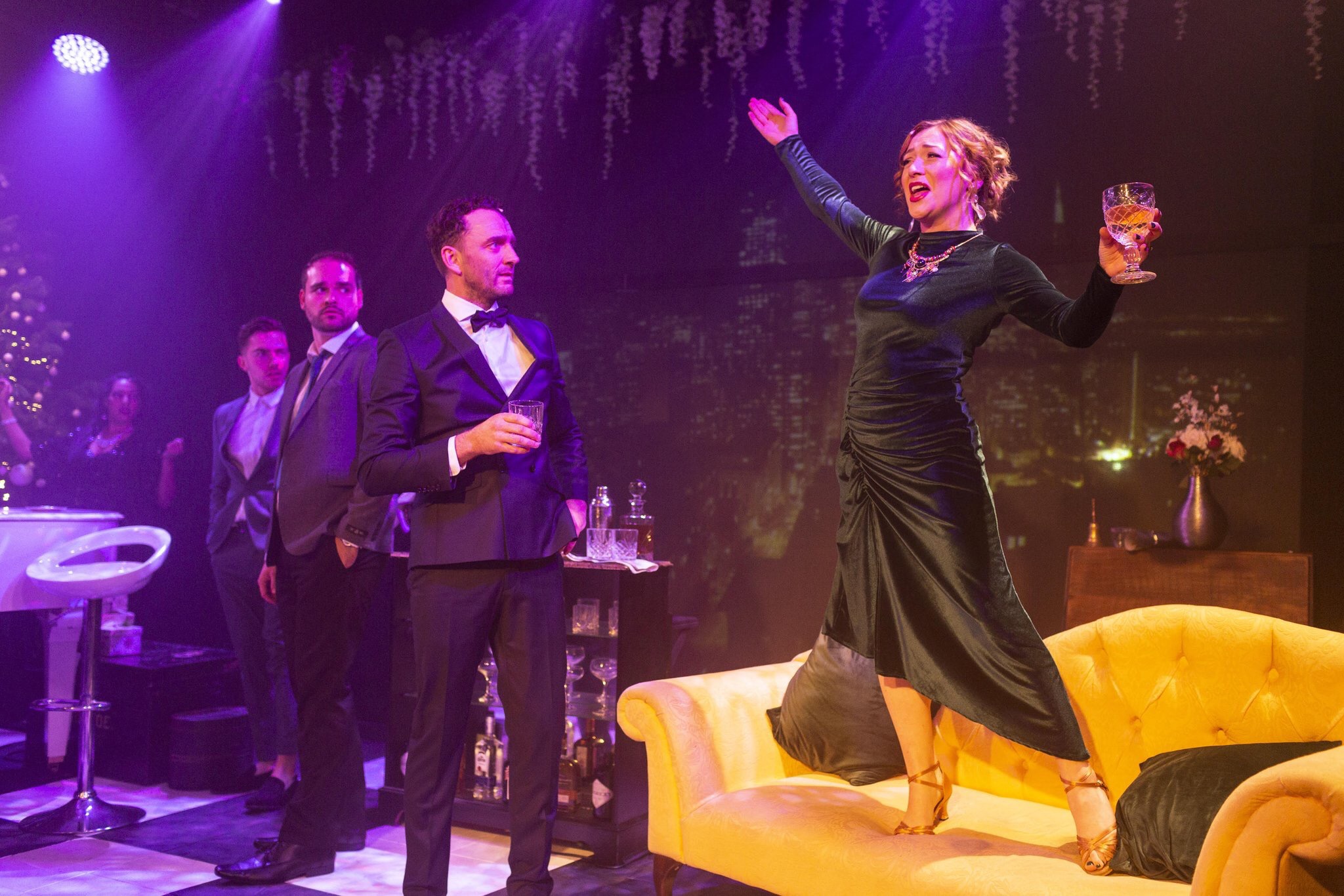 The pace is fast & once we start we gallop through, each piece thrilling in equal measure. Bronagh Lagan’s confident direction paired with William Whelton’s impressive choreography drives the piece from start to finish; Bang from A Little Night Music performed by Andrew Gallo, Simbi Akande and Alex Cardall perfectly illustrating this, punchy and powerful.

Special mention must go to Lauren James Ray whose delivery of Getting Married Today absolutely brings the house down, impressive throughout her wit and acting are both superb, she is a joy to watch.

Every member of this small cast delivers and then some as they work their way through each musical number; each track feels real, authentic and is honestly delivered. Sondheim’s lyrics so slick and witty ensuring we travel each emotional step with the characters.

Putting It Together is the festive treat you didn’t quite realise you needed but once you’ve sat and enjoyed a sublime evening in the company of this stellar cast you’ll be without doubt wanting to come back for more.

Joyfully entertaining from start to finish.

Putting It Together is on at Hope Mill Theatre until Saturday 24th November tickets available here.