Offering a glimmer of hope that theatre was finally returning, Marry Me A Little directed by Kirk Jameson opened at Cirencester’s Barn theatre on 16th October to rave reviews. Thankfully the piece was filmed ahead of lockdown allowing audiences to watch limited streamed performances online.

Starring Celinde Schoenmaker and Rob Houchen, two of musical theatre’s most loved voices; this musical revue from Sondeheim’s back catalogue is an emotive observation on what was and what could have been for two now single New Yorkers. 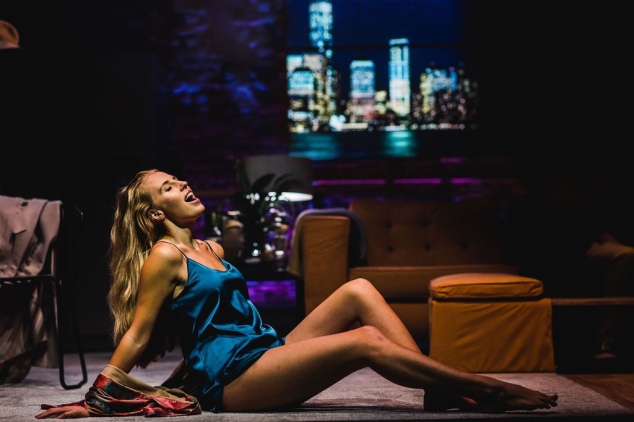 Played out side by side yet never physically touching, their history together is illustrated via Benjamin Collins’ projections of social media screen grabs which light up Sam Spencer-Lane’s atmospheric stage, while their uncertain future is examined and considered through Sondeheim’s thinking out loud, melodic vocal commentary.

The song list bursts with gems culled from final productions of Follies, Company, A Funny Thing Happened on the Way to the Forum, Anyone Can Whistle and A Little Night Music breathing new life into this intimite piece first seen off Broadway in the 1980’s.

Each piece is an absolute gift for these two talented performers resulting in an hour of musical theatre heaven as they take you on an emotional journey of lost love and their individual search for happiness. Circling each other with their tender delivery whilst wowing with their extrodinary talents throughout.

Bittersweet in its beauty this revamped storyline offers enough background via the couples online communication to retell this story as a relationship gone sour rather than strangers yearning for their own happy ending. Houchen swipes through Tinder while Schoenmaker responds to a booty call as their desperate need to fill the void of loneliness rings out.

Accompanied by Arlene McNaught on the piano Schoenmaker and Houchen perfectly deliver the nuances that make Sondeheim’s lyrics so special, open and ecstatic one moment, cynical and closed off the next they ensure this journey is both an unforgettable and heartbreaking hour of note-perfect escapism.

This relatable piece at a time when social media continually reminds us of the fun we’ve previously had will take you on a familiar Sondeheim rollercoaster of emotions, enthralling from the start through honest and effecting storytelling and leaving you yearning to watch again. If there was a theatrical treat like this on offer every weekend lockdown would be an absolute breeze!

Catch Marry Me a Little until Sunday 22nd Nov tickets at £13.50 are available here