Roald Dahl’s Fantastic Mr Fox, amazingly written 47 years ago, has aged well in this stage adaptation by Sam Holcroft for the Nuffield Sothampton Theatre and Curve Production. Although not originally intended to be performed on stage, and certainly not as a musical, this production bravely combines song, live music and a strong, funny script to re-tell the tale of Mr Fox, his motley crew and his arch enemy farmers, Boggis, Bunce and Bean.

The personification of Fantastic Mr Fox (played convincingly by Greg Barnett) and his fiercely loyal crew of woodland creatures contrasts colourfully with the hapless, selfish and at times dark characters of Boggis, Bunce and Bean, those mean-spirited farmers determined to put a stop to Fox’s antics.

Mr Fox, a literary version of Robin Hood, who steals from the rich to give to his hungry comrades, has no faith in those friends, despite losing his tail (and balance along with it), and refuses to rely on them in his time of peril.

Despite the obvious challenges faced in staging this production, the creative team cleverly rejected the temptation to recreate wildlife scenes, and instead used modern day set and funky materials, giving the staging a contemporary feel. The costumes similarly drew on more modern materials including sportswear, headbands and fluffy leg warmers

The cast worked hard, with Richard Atwill, Raphael Bushay, Gruffurd Glynn and Kelly Jackson all playing 2 roles, and completing some speedy costume changes. Although laced with humour, there were some ‘comedy gold’ moments provided by the excitable Rabbit (played by the very funny Sandy Foster) and Mole, played by Gruffud Glyn.

As well as being a story about good winning over bad, the audience is taken on a journey of discovery as Mr Fox realises that that with true friends around you, anything can be achieved and no problem is insurmountable. With tension building throughout the production, there were lots of laughs for the younger audience, and a few jokes too, to benefit the parents. Overall this is a perfect family show with a strong moral content, which will ensure that everyone is talking about it long after the curtain falls. 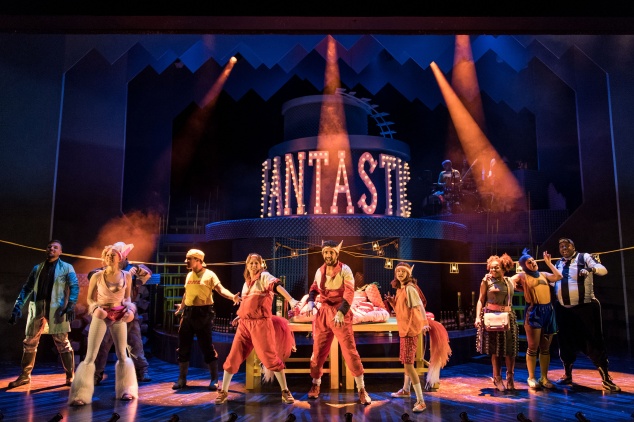 On at The Lowry until Sunday tickets available here http://www.thelowry.com/events/fantastic-mr-fox

The brand new adaptation of Roald Dahl’s much loved classic Fantastic Mr Fox arrives at the Lowry next week and promises to be a gloriumptious treat for the whole family!

Although Mr Fox is smart, clever and of course completely fantastic, does he underestimate how determined the farmers are to get their revenge? Can he hatch a cunning plan to save his friends and family? And can rabbit keep quiet for long enough not to give the game away? You’ll simply have to watch to find out!

We sat down with composer Arthur Darvill (familiar to many as Rev. Paul Coates in Broadchurch) to hear more about the show and find out what audiences can expect from this dahlicious family theatrical feast!

Arthur felt it was a real privilege to write music for this new production. “It is a pinch yourself moment. When re reading the book I thought I love this book but I don’t know if I can do this, which I think is a good reaction to have. Throughout the writing process, it has been about honouring what Dahl wrote and making sure the music tells the story in the best way we can tell it.”

A massive Roald Dahl fan, Arthur remembers reading Fantastic Mr Fox in his cabin bed when he was a child growing up back in Birmingham. “I read it in one go, in one night and just absolutely loved it. It had a drastic impact on the way my world was shaped. Dahl made the most disgusting things in life seem like the most joyous. He also had a great sense of justice, which can only be a good thing.”

Arthur expanded on what he wanted to capture about the story and its characters via the music; “There are a definite group of characters in Fantastic Mr Fox; humans and animals. I wanted to give them both a very different sound to start with and as the story develops, these sounds slightly cross over depending on what is happening. The farmers have a dirty earthly English sound and the animals are freer. Mr Fox is arrogant at times and Mouse sings about cheese, which is very sweet.”

We asked Arthur what he hoped audiences would take away from the show? “I hope audiences take away melodies that they can sing on their way home. This show is so much fun and the right people get their comeuppance. It is not black and white. You will go home discussing the moral content of the story whilst laughing at the jokes. It’s a perfect family show for all ages”.

You can catch Fantastic Mr Fox which is adapted by Sam Holcroft and directed by Maria Aberg, from Wednesday 5th July until Sun 9th July at the Lowry theatre, Salford. Tickets available via the following link; https://www.thelowry.com/events/fantastic-mr-fox