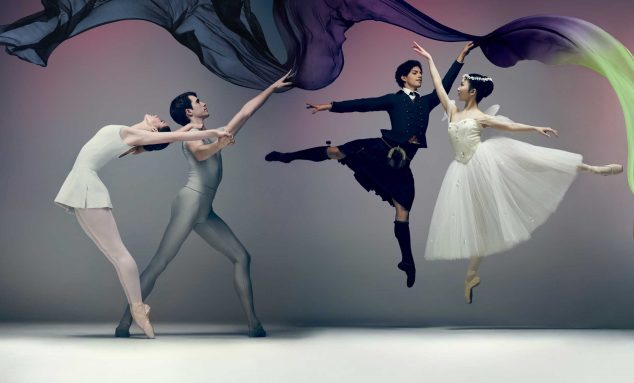 English National Ballet delivered a spectacular double bill at Manchester’s Palace Theatre last night, the two works, both new to the company offered dance fans an opportunity to see both Sir Kenneth MacMillan’s, Song of the Earth and August Bournonville’s La Sylphide recreated by Frank Andersen and Eva Kloborg in one delightful evening of dance.

First performed in 1965, MacMillan’s choreography for Song of the Earth features three central figures, a man, a woman and a messenger, ‘the messenger of death’. The trio are supported beautifully by the corps de ballet in this powerful and emotive exploration of the journey of life and the ever present looming of death. Beautifully set to Mahler’s haunting song cycle, Das Lied von der Erde and performed live by the stunning English National Ballet Philharmonic with accompanying operatic performers Rhonda Browne and Samuel Sakker. Each of the six songs are delivered with precision and impressive sculptural beauty. Dressed in simple greys, whites and blacks the dancers make full use of the Palace’s expansive stage, as the messenger of death Jeffery Cirio tenderly seduces firstly the solid and strong man Joseph Caley then draws in the stunning woman Tamara Rojo until she is left with no other choice than to accept the relentless call of death. 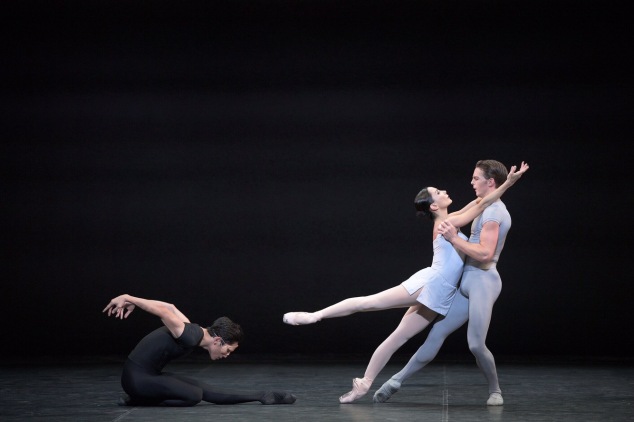 Song of the Earth allows ENB to showcase their strengths in this captivating piece, the two male leads deliver a dramatic and engaging opposition with Joseph Caley’s light and optimistic demeanour challenged by Jeffery Cirio’s dark and seductive dance of death. Tamara Rojo’s transition through the piece from playful innocence to tormented resignation is superb.

Part two in this captivating double bill is August Bournonville’s classic romantic ballet La Sylphide. Frank Anderson and Eva Kloborg stay faithful to Bournonville’s 1830s choreography as this charming piece introduces us to themes of love, infatuation and ultimately tragedy. In this engaging and joyous production we meet James (Issac Hernandez) on the morning of his wedding to Effy (Anjuli Hudson) as he wakes from a dream to see a mysterious and beguiling Sylphide standing before him, this sets off a fateful sequence of events which ultimately leads to tragedy and heartbreak.

With stunning design from Mikael Melbye we are transported by the corps de ballet to a jubilant wedding celebration in the Scottish Highlands. The festivities however are continually interrupted, firstly by the Sylph (Jurgita Dronina) who mesmerises and draws groom James (Issac Hernandez) in with her captivating beauty and secondly by the cackling and calculating witch Madge, portrayed wonderfully by Jane Haworth. The choreography is fast and perfectly precise, mixing classical steps with Scottish folk dance superbly. The Character acting is exceptional as this story is clearly and engagingly told. Moving from the thrilling scenes in the Higlands to the beauty of the enchanted forest La Sylphide captivates the audience entirely. Issac Hernandez is thrilling as James, strong and powerful he leaps elegantly from fling to forest. Jurgita Dronina enchants as the Sylph, mysterious yet magical.