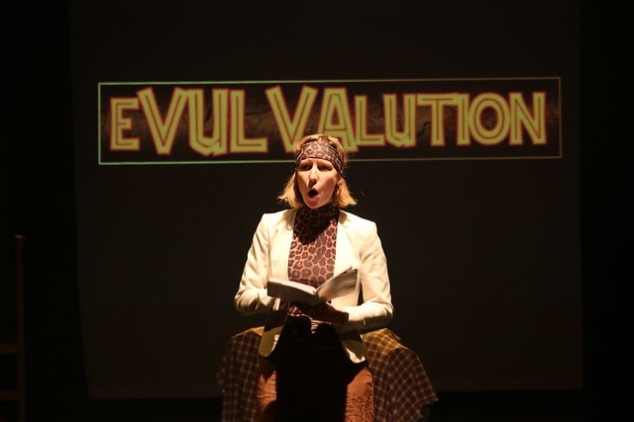 Pamela De Menthe however is not a woman to be kept down, that tricky 29th novel may be stuttering but she’ll use her mucky imagination and crude creativity to ensure her novel eVULVAlution reaches a pleasing and most satisfying climax.

The show is presented as a book launch for new novel eVULVAlution with just one catch, it isn’t actually finished yet. Turning to the audience for inspiration and some hilarious sound effects Pamela strives to deliver the literary work she’s convinced herself is totally groundbreaking and entirely necessary.

Her well developed humour is lapped up by the audience and while Pamela is pretty darn bonkers she is the kind of bonkers you can’t help but fall in love with. From her amateur power-point to her sponsorship deal with a motorbility scooter company she offers a well rounded character whose brilliance is a bright as her animal print bumbag.

A cheeky, fabulously fun and enormously entertaining romp through the world of self-published erotica. Roll on book number 30!

Catch eVULVAlution next at Waterside, Sale in July further information can be found here.