Not one but SIX queens are coming to reign over Salford this festive season proving there is much more to each and every one of them than just a forgettable name in an ancient rhyme.

Smash hit musical SIX arrives at The Lowry for a strictly limited 2 week run from Tuesday 4th until Sunday 16th December as the six wives of Henry IIIV take to the stage in a sassy and sensational sisterly retelling of their forgotten stories. Prepare for their feisty and fabulous her-storical her-stories in full, feel-good glittering glory.

Opening Night were lucky enough to catch up with writer Lucy Moss (one half of writing team Moss and Marlow) ahead of the show’s arrival to hear a little more about this infectious production that’s currently taking the theatre world by storm. 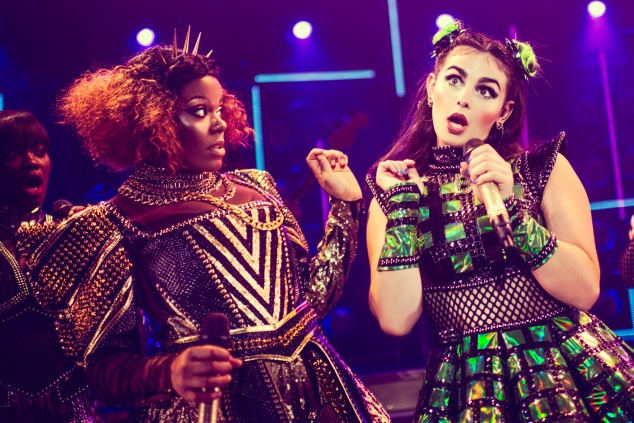 After meeting at Cambridge University Lucy Moss and Toby Marlow knew pretty quickly they wanted to write a show together; Lucy explained how the disparity of meaty theatrical roles for females was something they thought needed taking on: “In musical theatre particularly the majority of the female songs are about how much the character loves their husband or how sad they are because the man they want to love them doesn’t love them enough. We really wanted to create something that had more interesting and also funnier parts for women, it’s crazy really because it was just created as something for fun and our biggest worry was that our friends would think it was really bad. It’s been so cool it really has.”

Lucy added: The was a slot within the university musical theatre society to take a show to the Edinburgh fridge so Toby applied and came up with the idea of doing a show a bit like a pop concert with microphones and dance routines, I almost never thought it would happen but now we’re here about to go on tour and it’s been incredible.”

What is striking (and utterly brilliant) about Six is walking into a traditional theatre setting and seeing an all-female cast accompanied by an all-female backing band, sending out a very strong and positive message to theatre goers, we are in effect seeing the ultimate girlband on stage. Lucy explained: “We really wanted to tell the stories from the women’s perspective rather than it being just about Henry and how they died which is what we’ve all heard before, we wanted to tell more about their lives and their experiences. The message of the show and its growth very much coincided with the #metoo movement so I think the themes felt very relevant to a lot of people when the show first started taking off and it’s just snowballed from there.”

If you think you’ve heard earworms before then you ain’t heard nothing yet, prepare to be humming the SIX soundtrack for the rest of time as each track is as catchy as the last and could give any pop princess a run for her money, Lucy explained: “We definitely based the Queens on different pop divas so for example Catherine of Aragon is based on Beyoncé, Anne Boleyn is based on Lily Allen, Catherine Parr is Alicia Keyes and so on.”

As well as being massively entertaining, seriously just wait until you see it, SIX is also impressively educational as each Queen becomes so much more than just a name, we asked Lucy out of all the fierce Queens did she have a favourite? “My favourite Queen’s story is Anne of Cleves because she’s the only one who has a happy ending really, yes she got divorced but she ended up living in this really fancy palace in Richmond, drinking mead, going hunting and outlived every one of them even Catherine Parr who survived, she absolutely lived her best life til the end of her days.”

From starting off as a small fringe production the rise of Six fever really has been incredible. “We had absolutely no idea the show was going to do anything more than the fringe, I was excited then at the thought of somebody maybe coming to see it and inviting us to do one night at a fringe venue in London, that was like, in my wildest dreams and now were here it’s so cool, we’re definitely super hyped to come to the Lowry.”

Six the musical opens at The Lowry on Tuesday 4th December and runs until Sunday 16th December to ensure you have a spectacular Sixmas book your tickets here.