Based on the 1982 Oscar-winning film and bursting with feel-good 80’s favourites including ‘The Final Countdown’, ‘Livin’ On A Prayer’ and of course the ultimate ear-worm from the original score ‘Up Where We Belong’, An Officer and a Gentleman marches into Manchester this week.

In true 80’s romantic fashion we have a troubled bad boy in need of taming and a feisty female determined to live life her way until of course romance comes calling, complicating everything. When Zack Mayo rocks up at military boot camp full of swagger, he doesn’t bank on falling for local factory girl Paula nor being put through his paces by drill Sergeant Foley who has had his fill off wannabee officers. The challenge is on; can this angst filled rebel make it as not only an officer but also a gentleman?

Jonny Fines makes for a convincing Zack, with strong vocals and impressive acting skills he convinces as both the macho cadet and the dependable gentleman, he is playful and hugely likeable. Alongside Fines is an impressive Emma Williams as the strong-willed Paula Pokrifiki who knows her mind and is damned if she’s gonna be stuck in a factory for the rest of her life. Her vocals are sublime as she belts out hit after hit effortlessly. The chemistry between the two is strong and their interactions engaging and believable.

Equally convincing are Jessica Daley and James Darch as Lynette and Sid. Jessica’s stellar vocals and sassy attitude perfectly embody the role of Lynette while James Darch, covering the role of Sid at tonight’s press night, impresses with his strong vocals and powerful performance. 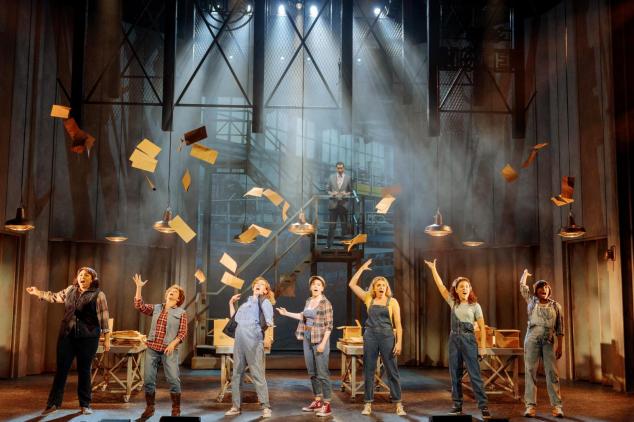 Yes in parts it’s pretty cheesy with some songs feeling a little shoe-horned in but if you’re looking for an uplifting and entertaining night at the theatre then this certainly hits the spot. The immensely talented cast deliver some stunning performances and offer a fresh take on several 80’s classics via George Dyers inventive orchestration and arrangement, the use of Martika’s ‘Toy Soldiers’ is particularly poignant.

Douglas O’Connell’s video design is projected to great effect against Michael Taylor’s set which is beautifully lit by Ben Cracknell and gives a great sense of entrapment and the need to escape the humdrum of small town life.

The script may be thin in parts and the action predictable but An Officer and a Gentleman does exactly what it says on the tin, it undoubtedly uplifts and entertains. This is feel-good jukebox fun, the fizz in the air as ‘that scene’ approaches is palpable ensuring the audience get exactly what they came for, escapism, incredible talent, a little bit of drama, a whole lot of romance.

An Officer and a Gentleman is on at the Opera House until Saturday 18th August tickets available here.