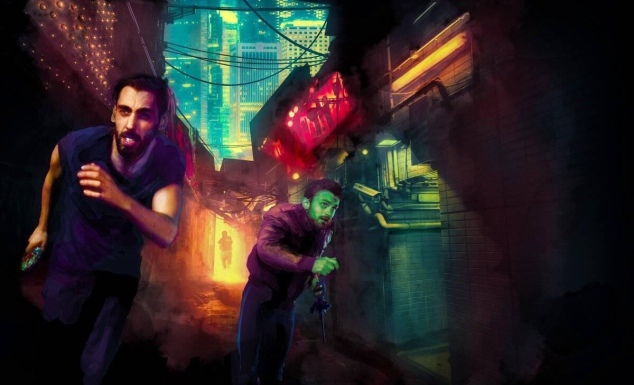 Nathan Parkinson, Zachary Hunt and Tom Roe are ‘The Pretend Men’ and their newest show is ‘Police Cops in Space’ which is having a three night run in the Lowry Studio. To be frank, I’m slightly annoyed that I should probably write three hundred words about it when all I really need to do is write three….

Honestly, it is absolutely no surprise that these guys had a completely sold out run at the Edinburgh Fringe Festival two years in a row and also at the Soho Theatre in the West End. It’s just so clever.

With a mixture of the tightest, in-synch physical theatre and choreography and off the cuff improvisation you will be laughing from the opening ‘Credits’. Having never seen these guys before ( what a fool I am!’) there were a few ‘in’ jokes for those that had seen their previous show ‘Police Cops’, that went over my head but I didn’t care.

The use of music, lighting, props, fabulous wigs and random humour kept the audience on their toes. And they work so hard. I saw a backwards roll last night the likes of which I have never seen before. It was a testament to these fellas that every single person there last night in a packed studio had thrown caution to the wind and snow and had made the journey to an eerily quiet Salford Quays.

It’s difficult to write a review about a show like this as I don’t want to give anything away because you need to see for yourselves!

If you can get there tonight or tomorrow I urge you to go. It’s a crazy world we live in these in these days and it can get very stressful so do yourself a favour and give yourself an hour of just brilliant entertainment.

Police Cops in Space is on at the Lowry until Saturday 3rd March, tickets available here.