Over the years there has been many interpretations of Sir Arthur Conan Doyle’s The Hound of the Baskervilles – at least 20 TV and film adaptations alone, not to mention countless theatrical productions. However I challenge anyone to say they have seen anything quite like Northern Rep’s version of this classic tale… and if you don’t believe me, the proof is currently at the King’s Arms for all too see.

Arriving at the King’s Arms, Salford for a two week run, this fun filled murder mystery focuses on the mysterious death of Sir Charles Baskerville and the apparent threat to the heir of the Baskerville estate, Henry Baskerville. Super sleuth Sherlock Holmes and his trustee sidekick Dr Jane Watson travel from their home on Baker Street all the way to the Devonshire moors, where they encounter all manner of suspects, with even more suspect accents! Can our daring duo not only solve the case but also survive the horrid hell hound? Time will of course tell.

Those expecting a faithful and straight laced reworking of this classic tale are in for a shock. This is an innovative, funny and downright brilliant reworking of this classic tale. All parts are played by two hugely talented actors in Michael Justice and Angela Hazeldine. The performances alternate with two other actors, so it’s pot luck as to who you’ll get, however this is the second time I have seen this production with different cast members and in no way has it detracted from my enjoyment – if anything, it’s all the better as it keeps things fresh and slightly unexpected. The script is packed full of so many double entendres and just plain daft gags that maybe it should be called Carry on up the Baskervilles. However the joy really comes from Justice and Hazeldine’s adlibbing and doing their best to put the other off their stride. 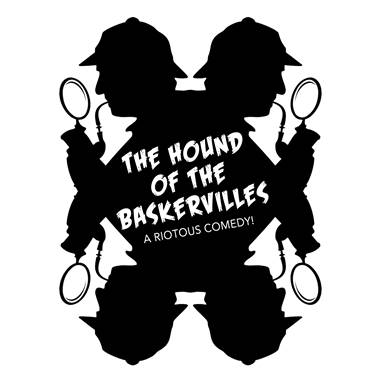 Granted, they play fast and loose with the original story and by the end the convoluted plot becomes secondary as the show becomes an excuse to have a bloody good giggle.  A spot of audience participation is required and the audience tonight got into the swing of things, laughter is most definitely the order of the day.

As I said earlier, this was my second time seeing this production and each time has been something different: the first time there were some children in attendance and the second there were none, but both performances were adapted to make all feel welcome, with the first performance being more child friendly, without losing any of the humour.

It’s the job of any critic to critique any show as honestly as possible, however sometimes there’s no harm in leaving it to audience members to have the final say: I got talking to a lovely couple during the interval and the gentlemen claimed he’s been watching shows with his wife for over 45 years, this he told me is only second show he hasn’t fallen asleep in during all that time and I can assure you he made it through the second half too!

Go and see this riotous romp at your nearest opportunity – you certainly won’t be disappointed! Fun, filthy and downright fabulous!