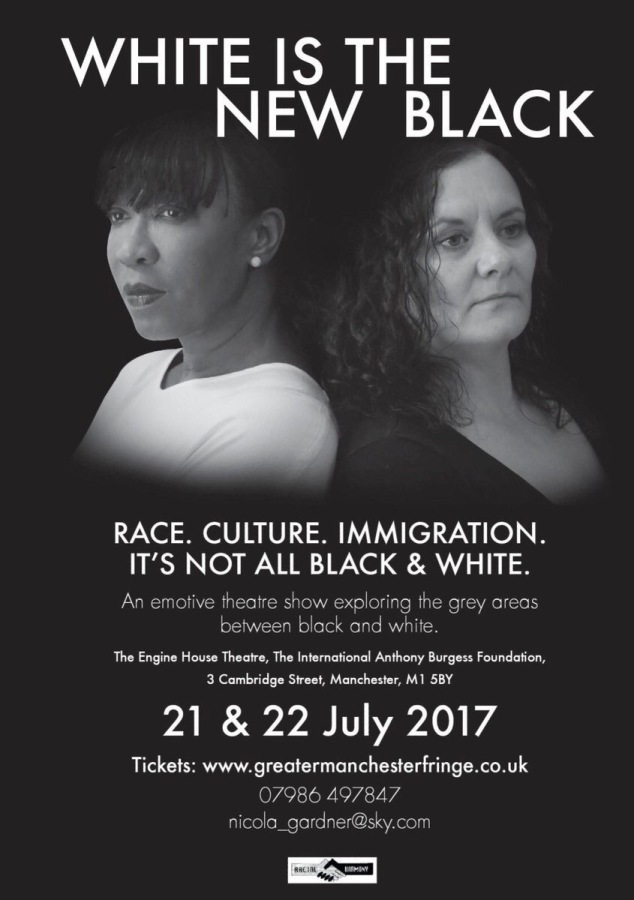 Last seen at the Anthony Burgess Foundation in the hilarious self-penned ‘The Community Centre’ Nicola Gardner returns to Manchester with fellow actress Jennifer Banks to deliver two very different yet hugely poignant plays, in the double bill, White is the new Black.

Piece one, The Last Appointment, written by Nicola as a commission for Sheffield’s Crucible Theatre sees black middle class GP Jo (Nicola Gardner) confronted by white Black Lives Matter activist Aretha (Jennifer Banks) who arrives at her surgery for the last appointment of the day. Things quickly become heated and increasingly personal as Aretha struggles to understand why Jo would not want to protest and take up the front line at rallies like Aretha, she tells her to “Get with the programme” and challenges Jo’s position of privilege, aghast that being the only black girl in her school didn’t leave her traumatised and angry at the injustice Aretha feels Jo faced. Whereas Jo wants to forget the struggles and the strife and aspires to succeed, holding people like the Obamas in high esteem and admiring their achievements in life, she wants to look forward not back.

There are some highly entertaining moments delivered beautifully by both actresses, Aretha strives to make Jo believe she too has lived a persecuted life due to being a Scouser, she knows how it feels to be targeted and treated badly, resulting in dramatic and hilarious eye rolls from Jo. Aretha challenges Jo’s attitude just as much as Jo challenges Aretha’s motives, ultimately boiling down to that fact that both just want what they feel is right and is fair despite going about things in dramatically different ways, both ladies show how ultimately despite our choices and actions we aren’t so very different after all.

Piece two in contrast to The Last Appointment reverses the roles of our two actresses, in Florence – The Fight of her Life written by Maurice Bessman, we meet African asylum seeker Florence (Nicola Gardner) as she comes face to face with seemingly cold-hearted Immigration Officer Mrs Lewis (Jennifer Banks). Florence is literally pleading for her life during the cold and demeaning immigration test as Mrs Lewis digs for detail despite the deeply upsetting and heartbreakingly sad reality of the life Florence has escaped from, boxes are ticked and devastating accounts disregarded as Florence fails to provide hard, factual evidence of the stories that she tells. The immigration office want physical proof explains Mrs Lewis and without that she must simply press on and get her job done, detaching herself from the emotion of the story, she simply sees herself as a woman just doing a job. The coldness and reality of the test is hard-hitting and sensitively delivered by both actresses, our characters have a task to complete and both are driven by achieving the best outcome, for Florence it is a life-changing and potentially devastating outcome should she be refused, for Mrs Lewis it’s just another work-placed task that she needs to complete efficiently. Florence has to relive painful and devastating memories, which are cruelly brushed away by Mrs Lewis due to not being documented anywhere as proof they ever happened.

While the two pieces are very different, they both ultimately highlight the same themes, despite colour and differences in race, we are essentially all one, we share so much in life that ties us together and bonds us, we love, we live and we all strive to succeed. While we may differ in our attitudes, choices and approaches, there are many more similarities that draw us together. The two plays both powerfully demonstrate how deep down we really are one, our diversities should be embraced and celebrated as the melting pot we come together in grows in richness and diversity. Emotive, powerful, and beautifully delivered theatre, highly recommended.

White is the new Black has one final performance tonight at the Anthony Burgees Foundation, tickets available here; http://www.greatermanchesterfringe.co.uk