It’s hard to believe that The Women in Black is celebrating its 30 year anniversary, such is its reputation and reverence it seems to have been around much longer. Doing for the horror genre what The Mousetrap has done for murder/mystery, the two plays are held in such high regard that seldom is mentioned of the shocks, frights, twists and turns: it is more just a case of take a seat and go along for the ride.

Based on the 1983 Novel by Susan Hill and adapted for the stage by the late Stephen Mallatratt, The Women in Black sees retired solicitor Arthur Kipps attempting to tell the terrifying story of his time at isolated and desolate Eel Marsh House, located in the market town of Crythin Gifford. To fully do justice to the horrors he encountered, Kipps enlists the assistance of an unnamed actor to help tell his tale. The two men are at odds with what they want from the experience: Kipps wants the courage to finally finish his story and put the nightmare behind him, whilst the keen actor wants to tell a fascinating tale using all the craft of theatre and performance at his disposal. What follows is a nightmarish journey filled with laughs and frights as we witness the full horror of Eel Marsh House and the sheer evil of The Women in Black.

Both leads are outstanding: Matthew Spencer plays the confident unnamed actor, and the younger Arthur Kipps to perfection seamlessly drifting between brash showmen and a man trapped in a situation that is spiralling out of control. David Acton plays the older vulnerable Kipps as well as a variety of roles, both act as narrators throughout. Acton certainly borrows from Alec Guinness in Kind Hearts and Cornets to help with his transformation which is high praise indeed.

I would argue that the play has a third performer: the theatre itself. Within the first minute of the play Spencer strides from the back of auditorium and thus lets us know that space you occupy is part of the play and by design as the narrative progresses you aren’t safe in your seat either! Throughout the play you find yourself scanning the room to see where the next fright is coming. This is aided and abetted by some fantastic sound and lighting design from Gareth Owen and Kevin Sleep respectively. 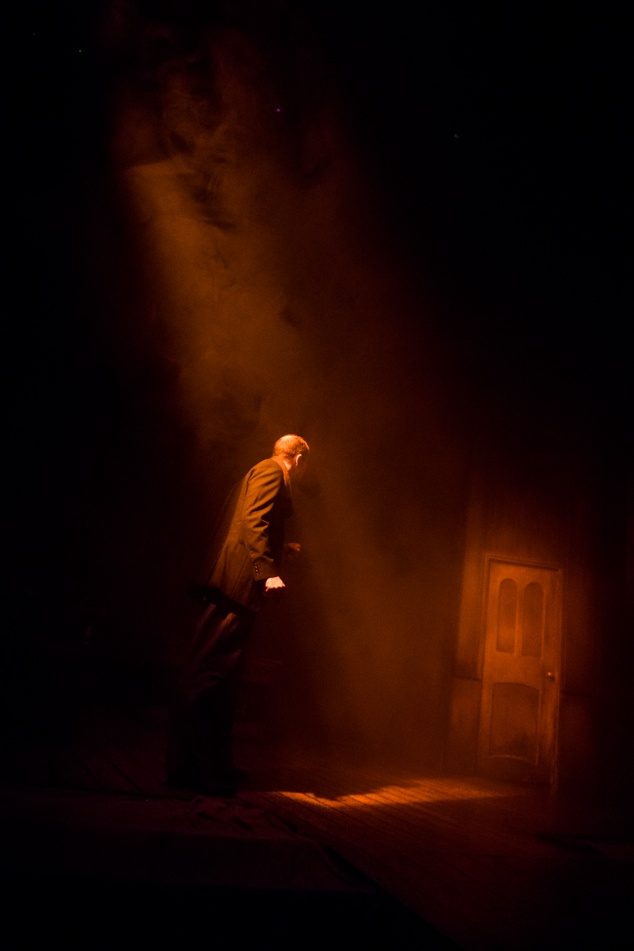 The script is surprisingly funny: punctured with humour, I laughed more in the first 15 minutes than I have at most supposed comedies; however this is a ploy, designed to sucker you in and make you complacent so that when the first scare comes it smacks you like a spade in the face. As the play progresses the laughs diminish and the frights more frequent.

It is a credit to not only the two leads: but Robin Herford’s direction that the play has the right balance of laughs, drama, and terror that keeps you keeps you on the edge of your seat throughout. It is a slow beginning but once it hits its stride and it’s thoroughly enjoyable.

I’m not going to spoil any frights or big scares, however what I will say is that the reaction of some patrons sat around said a great deal: one lady said she nearly lost her lunch (and later claimed she almost had an even worse accident than being sick), several people gasped our Lord and saviours name and my arm has some heavy bruises where my friend held on during some of the more terrifying scenes.

The Women in Black is what great theatre should do: take you on a rollercoaster ride of emotions, at times makes you laugh at the same time as scare the life out of you. This is a truly outstanding piece of theatre and one that will still be celebrated in another 30 years time. If I could give one piece of advice if you are going to see it may I suggest getting rid of that old rocking chair… it’ll be for the best.

The Women in Black is on at The Lowry until 25th March 2017, tickets are available here;