Since opening it’s doors for the first time in 2017 the Storyhouse has often made some bold and brave choices for their in-house productions Whether a fresh take on an old classic, a brand new or rarely seen production being brought to life, they always offer up something intriguing and unique and their latest production The Strange Case of Dr Jekyll & Mr Hyde is no exception.

Based on the novella by Robert Louis Stevenson, this adaptation for the stage by Glynn Maxwell is a new take on a classic story that we think we know like the back of our own hands but do we really?

Retaining its Victorian London setting, we find a young girl selling matches, she is viciously attacked in a mysterious assault. The next morning Dr Jekyll (Edward Harrison) is troubled by the memory of the match girl but confused at having a pocket full of matches but no recollection of how they got there.

Dr Jekyll writes to his old friend and former assistant, Lady Gabriel (Natasha Bain) for guidance. However, Lady Gabriel is focused more on the letters of her niece Rose (Rosa Hesmondhalgh), a curious, feisty, independent young women seeking adventure and a place to stay in London town.

With London besieged by a series of grizzly murders, Lady Gabriel hasn’t the time nor the inclination to help her old friend, her main concern is that of the safety and wellbeing of Rose. However, soon Rose’s curious nature rubs off on her Aunty, this coupled with her intrigue of Dr Jekyll’s work on the splitting of the soul as well the mystery surrounding the deliverer of the letters from Jekyll, a Mr Hyde (Matthew Flynn) lead the pair to a meeting with the Doctor.

Whilst at Jekyll’s house, Lady Gabriel and the Doctor have a private meeting, which Rose is certainly not invited to attend, this leads the inquisitive adventurer to go exploring when she stumbles upon Jekyll’s labratory, his journal and another encounter with Mr Hyde that puts her and and her aunty in great danger.

There is so much to admire about this production that it’s difficult to know where to start. The creative team behind the show have taken a great many risks with narrative, style and presentation and the risks reward the audience with an original, atmospheric and psychological chiller that has a great deal of relevance in the 21st century.

Maxwell’s script is an update on Stevenson’s source material, still there at it’s core is that battle, between  good and evil, and the duality of human nature, whilst making the decision to explain Jekyll/Hyde’s behaviour as that of addiction, a need to step from the dark into the light, which adds an intriguing layer. We also have a strong female presence in this adaptation, which is missing in the source material. The character of Rose is a new character, and one that is yet to be troubled and trapped by the world around her.

Under Psyche Stott excellent direction, we have four very different performances, Natasha Bain gives a strong, world weary, turn, a matriarchal figure of the piece. Rosa Hesmondhalgh is a breath of fresh air as Rose, adding light relief throughout but this is much more than a comedic performance, here is someone that the world hasn’t corrupted yet, but she is far from naïve.

Often in productions one actor plays both Dr Jekyll and Mr Hyde, however we have Edward Harrison on good form as the frazzled unhinged, mad professor, whilst Matthew Flynn is menacing as his alter ego, I swear he grew in size as the play reached its conclusion. Flynn must wrestle with some poetic yet tongue-twisting dialogue, however he masters it skilfully.

What does make the production that extra special is involvement of choreographer,  Paul Bayes Kitcher, whose work with Harrison and Flynn really pays dividends, especially during the transformation scenes.

Additionally, the sound design by Adrienne Quartly ratchets up the tension throughout, add into the mix a simple yet intriguing stage design of glowing copper pipes, Victorian lamps and secret passages and you have an innovative, thrilling and original piece of gothic theatre.

The Strange Case of Dr Jekyll & Mr Hyde is on at the Chester Storyhouse till the 19th October. Tickets available here. 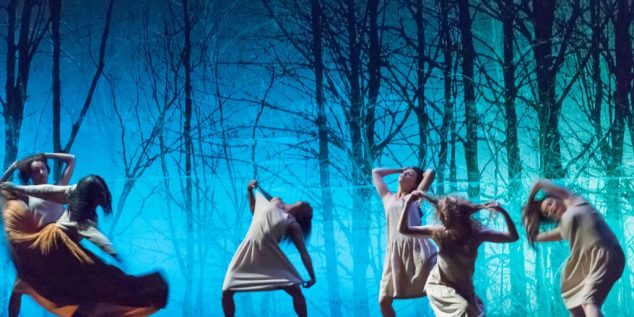 First performed back in 1953, the themes raised in Arthur Miller’s The Crucible continue to speak true today, illustrated to gripping and dramatic effect in this bold and atmospheric production from director Geraldine Alexander.

When Arthur Miller wrote the play back in the 1950’s he used the Salem witch trials as a metaphor for the rife anti-communism which was gripping the United States at the time. Liberal thinking was seen as a challenge to American society and authorities acted quickly to stamp it out, something we see ever-present in the political climate of today.

The Crucible transports us to 1692, where a small farming town has been gripped by a frenzied paranoia as witchcraft rumours swiftly circulate and fear takes hold. As accusations rise innocent women and the men who defend them are led to the gallows, their only hope of surviving, confessing the unthinkable. Catastrophic events unfold as a frenzied and fearful hysteria grips the town.

Jess Curtis’ atmospheric set & costume design is clear and uncluttered, inventive as well as interesting, allowing the themes to speak loudly as the madness unfolds. The trust staging is used to great effect, as an audience you feel at the centre of the action, the intensity and claustrophobic nature of the piece is striking and in your face, from the hysterical girls to the heartbreak of the Proctors, we feel every ounce of emotion. Chris Davey’s lighting design is exceptional, casting shafts of light on proceedings, highlighting the oppression of the innocents accompanied perfectly by Simon Slater’s chilling sound design.

The cast deliver Miller’s words with Northern voices giving an authentic and relatable feel. The ensemble are impressively strong, coming together in the courtroom scene to dramatic effect. Freddy Elletson makes for an impressive Reverend Hale, attempting to bring calmness to the madness, devout and fair he becomes increasingly disturbed by the injustice and absurdity he it witness to.

Matthew Flynn and Mary Doherty as John and Elizabeth Proctor add poignant emotion to the piece. Their arrests proving this witch hunt has gone way past the point of no return. Leigh Quinn shines as mary Warren, troubled, tormented and ripe for dangerous manipulation from Eleanor Sutton’s determined and defiant Abigail Williams.

Director Geraldine Alexander’s production succeeds entirely in delivering a powerful warning of how the anxiety and fear of the masses can be taken advantage of in the pursuit of personal power to the most devastating effect. The powers that be using exclusion, lies, fear and isolation to maintain the status quo of the community, sound familiar?