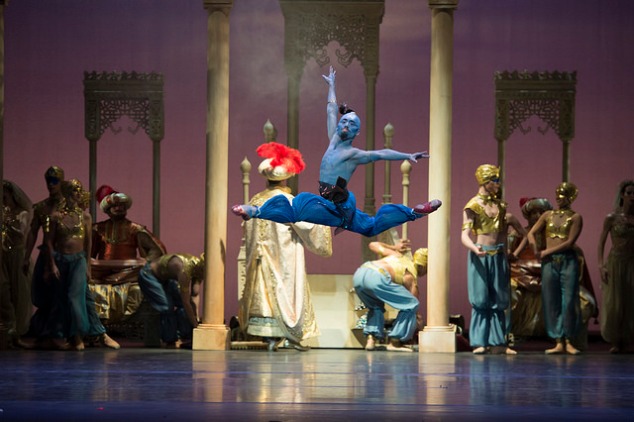 Birmingham Royal Ballet returns to the Lowry’s Lyric theatre this week with their magical, family-friendly production of Aladdin. Taken from the stories of the Arabian Nights, David Bintley’s splendid version of this classic tale, with music by the BAFTA award-winning Carl Davis chose Salford to begin their Autumn/Winter ’17 season.

This enchanting production perfectly balances humour with beautiful chorography, and explores aspects of the tale that audiences may not have been aware of. The story begins with a young, cheeky Aladdin (Mathias Dingman) escaping the clutches of the palace guards with the help of the mysterious Magician, the Mahgrib (Iain Mackay), who subsequently tricks Aladdin into entering the dark cave on his behalf to retrieve the lamp. 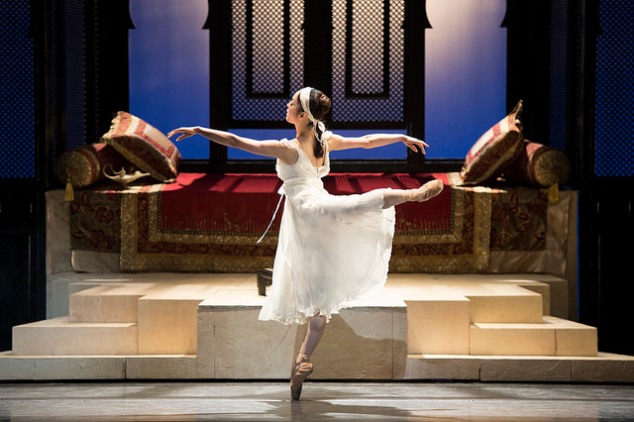 Each Act has its own crescendo which does not fail to dazzle the audience. The Cave of Riches at the end of Act I, is one of exquisite beauty, in which mischievous Aladdin is surrounded by an array of dancing gems who demonstrate a wide range of styles and techniques much to the delight of the audience. The gems lead Aladdin to the old lamp which places him on a road to riches and leads him to his true love, princess, Badr al-Budur (Momoko Hirata).

The sets and costumes become more vibrant and luxurious as the story unfolds, and as Aladdin himself becomes more accustomed to his life of luxury under the brilliantly blue Djinn of the lamp (played by Tzu-Chao Chou). The performance would not be the same without the dazzling orchestra conducted by Paul Murphy and led by Robert Gibbs, which adds to the atmosphere immensely, allowing the performance to swap and change between suspense and humour seamlessly.

This production is bound to astonish audiences of all ages, with its delightful and superbly delivered chorography, technicoloured sets, sumptuous costumes and enchanting score. Birmingham Royal Ballet once again prove why they are one of the most loved and celebrated companies around, visually stunning, highly entertaining and not to be missed!

On at The Lowry until Saturday 23rd of Sepember tickets available here http://www.thelowry.com/events/aladdin