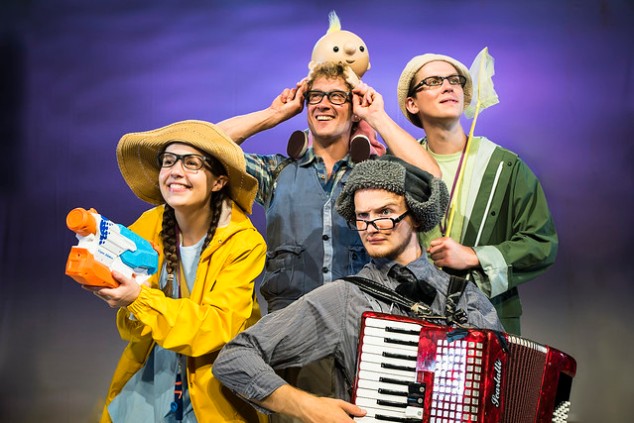 Micheal Rosen’s 1989 picture book We’re Going on a Bear Hunt is rightly considered a children’s classic – it’s been a bedroom staple in our house since my son was a baby.

It has all the necessary ingredients – beautiful illustrations by Helen Oxenbury, fun repetitive rhyming language to read-along to, and not forgetting a dash of mild peril!

So how would it translate to the stage? Thankfully, brilliantly (phew!). This is up there with the best kids book-to-stage adaptations we’ve seen (an opinion confirmed by my 4-year-old, who said it was “as good as What The Ladybird Heard” – which is the highest of praise, believe me!) 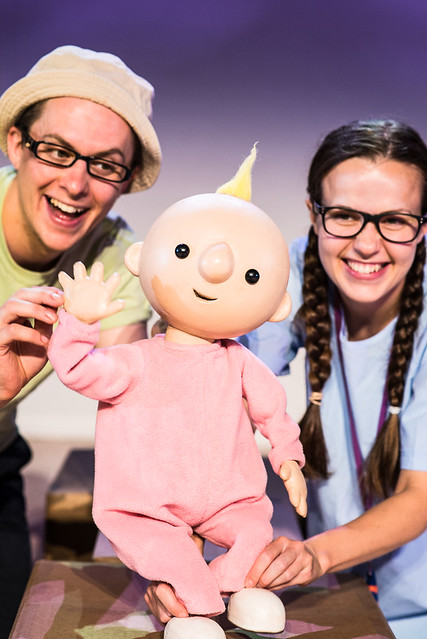 The staging is ingenious. Set against a backdrop of am evocative watercolour paint splodge, the much-loved elements of the book (Mud! Grass! Snow storm!) are brought to life by the cast using stuff you’d find at home – washing up bowls, bed sheets, paint and paper. Using familiar elements of messy play that the little ones in the audience will recognise, and indeed be able to recreate at home was very clever, and incredibly effective.

The brilliant cast of four (well technically 5 if we include the titular bear!) show fantastic energy throughout, individually and as an ensemble.

Tim Hibberd’s sardonic dad has just the right amount of wry humour to get the adults in the audience on board, but with boundless energy and warmth to get the kids on side too. 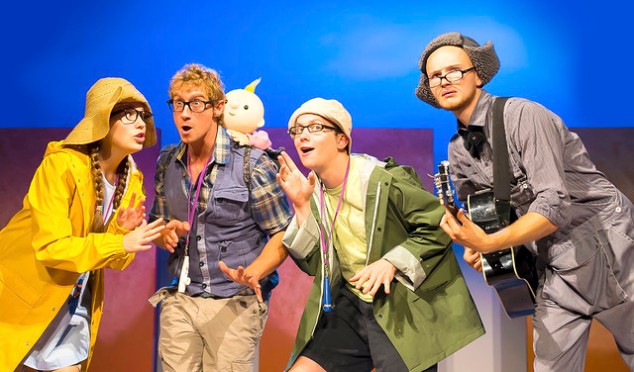 Hannah Donelon and Artie Godden as the young girl and boy display great comic timing and physical comedy and Benjamin Hills as the family dog is great fun! He only says the occasion,y ‘woof’ but plays a multitude of instruments, bringing Benji Bower’s score to life.

My little co-reviewer’s favourite bit? Obviously the obligatory waterpistols that brought the splashy-sploshy river to life and to the audience! But he laughed out loud throughout, clutched my arm whenever he heard the bear ‘roar’ and said it was a “nice” surprise when the eventually-found bear didn’t turn out to be scary AT ALL. 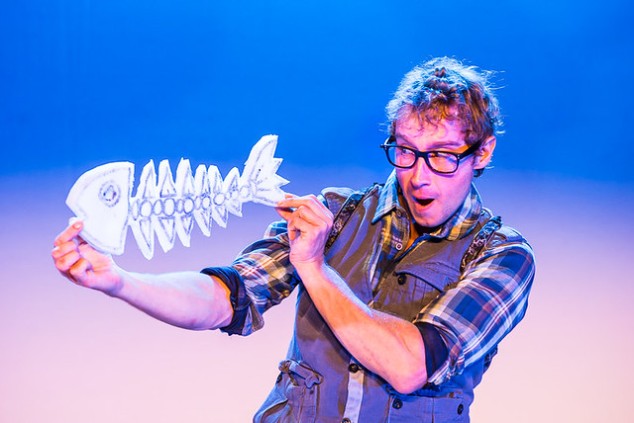 We’re Going on a Bear Hunt is at The Lowry, Salford Quays, until August 31st and is the perfect summer holiday treat for your little bear cub. (And if you want to prolong the fun there’s an accompanying bear hunt themed trail across the Lowry and the neighbouring outlet mall – collect a fun sheet from the customer service desk in the mall).

In a word, roarsome!

We’re Going on a Bear Hunt is on at The Lowry until Saturday 31st August, tickets available here.