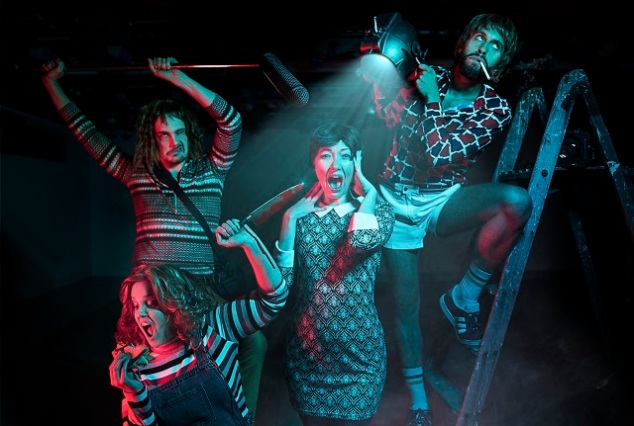 Lowry associate artists Kill the Beast return to the Salford venue next week with their new show Director’s Cut before they head off to Edinburgh Fringe for a summer of hilarious and a teeny bit haunting comedy japes.

Opening Night caught up with one fifth of the ‘Beast’s’ Natasha Hodgson to hear a little more about their latest offering and what exactly Lowry audiences can expect from the award-winning troop when Director’s Cut opens in the Aldridge Studio on 7th June.

Welcome to the worst film never made. Thankfully, there’s only one scene left to shoot…

The fire has been contained, the wigs have been sterilised, and the star has been replaced after “The Accident”. Surely, nothing else can be waiting in the dark…

Director’s Cut, a madcap mash-up with a generous sprinkling of spoof horror introduces us to a 1970’s lead actress determined to take her revenge from beyond the grave, will she manage to stop filming on the most truly terrible and blisteringly bad movie she ever made?

Natasha Hodgson described to us where the idea for Director’s Cut came from. “We were chatting in a lovely sunny garden one day about our favourite horror films (classic sunshine chat) and how amazing, iconic films never seem to manage iconic sequels. We started talking about Rosemary’s Baby (one of our favourites) and imagining what a terrible sequel to Rosemary’s Baby – Rosemary’s Toddler? – might look like. And what if, whilst filming this terrible sequel, the spirit of the original film came back to wreak vengeance on this terrible follow up!”

Like previous shows The Boy Who Kicked Pigs, He Had Hairy Hands and Don’t Wake The Damp, Kill the Beast’s signature style of fast-paced action, original music and brilliantly bonkers comedy will lend itself perfectly to this silly yet sinister escapade. Natasha explained “I play a couple of characters, but my favourite is an older actor called Judy Goose, she’s been in the industry forever, and although she’s done a whole host of arthouse films, she’s always most excited about her adverts for Simpkin’s Soapy Scrubbers (“for wives and for mothers”) because of their big, fat pay-cheques. You’ll also learn that she’s a dab-hand at dealing with a dead body. But you’ll have to see the show to find out which one…”

Here at Opening Night we are enormous fans of Kill the Beast’s deliciously dark humour and inventive staging, Natasha confirmed while the humour remains there will be some new and rather exciting changes to the staging of this new production, “Our hearts belong to ridiculous, dark and silly jokes, and that’s always going to be at the forefront of everything we make. However, we’re ditching the projections this time around, in favour of actual AV screens – it makes ghost trickery a lot more fun. We’ve done three shows with projected sets, and this time around we wanted to build something solid from scratch – we’ve got a real life 70s film set on stage, and we can’t wait to cause catastrophes within it.”

Now in their sixth year as Lowry associate artists Natasha explained just how important the support from The Lowry has been, “We feel so, so lucky to be supported by them, and if more theatres provided the sort of 360 care and help that they do, the emerging theatre scene would be able to take a lot more risks, and make a lot more fantastic stuff. But hell, it’s a hard time for the arts. It’s a hard time for a lot of stuff. Best thing we can recommend? Come see a silly, fast-paced comedy about a vengeful, opinionated ghost. That will probably sort everything out.”

Director’s Cut opens at The Lowry on Thursday 7th June and runs until Saturday 9th tickets priced at £12 (£10 for concessions) can be found here. here.