When it it was announced that the stage version of The Exorcist was coming to Manchester I freely admit I was more than a little excited for a couple of reasons. The first being that this is one of my favourite films, when growing up the film had mystic about it mainly due to it being unavailable for some 11 years, to get hold of a copy was seen as a right of passage when growing up and when you finally did get to see it it did not disappoint. The second is that the film seldom out of your consciousness if like me you’re a fan of film critic and broadcaster Mark Kermode (Hello to Jason). There is seldom a week that goes by where the good Dr doesn’t manage to shoehorn an ‘exorcist story’ into his radio programmes and podcasts.

The stage adaptation from writer John Pielmeier, draws more from the 1971 novel by William Peter Blatty more so then William Fredkin’s film. It tells the story, of Hollywood actor Christine MacNeil (Susan Ward) and her daughter Regan (Susannah Edgley), they’re staying in a big creepy house, in Georgetown, Washington whilst Christine shoots her latest movie. However, with Regan’s birthday coming up and anxiety of her estranged father not contacting Regan along with the strange noises coming from the attic not all is well at home. 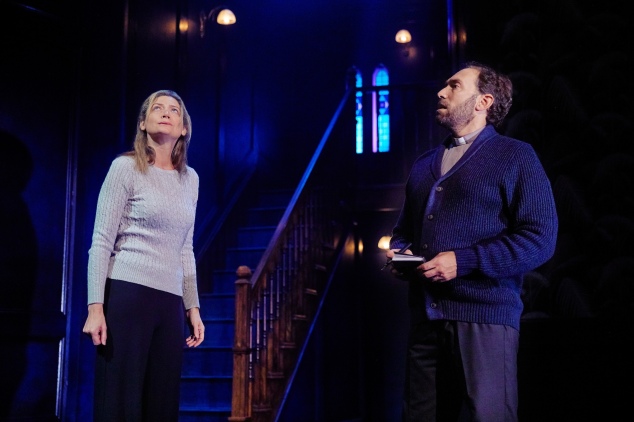 Regan soon begins speaking of an imaginary friend, Captain Howdy, who she claims to have encountered her whilst playing with a Ouija board. Her behaviour becomes more erratic, as she self harms, uses profanity, urinates on the floor, and more disturbingly predicts the death of Christine’s friend the movie director Burke Dennis (Tristram Wymark).

As Regan’s behaviour worsens, her health deteriorates and with doctors, medication and psychologists providing no cure Christine is running out of time to save her daughter. In the meantime, a Father, Damien Karras (Ben Caplan) is having a crisis of faith, having lost his mother, feelings of resentment, regret and remorse surround the priest, as he comes to terms with his own guilt at her passing. A meeting between Karras and Christine prompts the desperate mother to enquire about an exorcism; Karras acquiesces to Christine’s proposal and so begins a battle to save not just the life of a little girl but also the souls of those around her.

Director Sean Mathias has done a great job of bringing this classic of the silver screen to life. From the moment you enter the theatre there was a sense of trepidation in the air, right from the the get go, there are some big jump scares to get you in the mood. However, these are soon dispensed with in favour of the more shocking elements of the text: vomiting, foul language, murder and the ordeal that this girl and her family are going through.  All the key elements that caused and still cause outrage to this day are there, of which I will not spoil, yet they still manage to shock even now, and I knew what was coming.

The performances are solid throughout, Susannah Edgley has the difficult job of an adult playing a child, which she manages to do brilliantly, she fully captures the sweet innocence and absolute horror of Regan. Sophie Ward is equally as good in her role, its one you could easily go OTT with, yet she refrains from doing so giving a measured but heartfelt turn.

If this were a Hollywood blockbuster, Paul Nicholas would get the ‘and’ or ‘with’ billing on the poster, but here he gets top billing for what is essentially supporting role, however Nicholas brings a real presence to his role as Father Merrin, an experienced priest drafted into help with exorcism ritual. It is a restrained, understated but no less vital performance.  Finally, there is the un-credited performance of Sir Ian McKellen as the voice of the demon, the potty-mouthed thesp, pretty much steals every scene he’s in without being even being there! If there is filmed footage of this being recorded, then get it online quick because it would look fantastic. A huge amount of praise must be heaped on Edgley who does an excellent job of lip-syncing with McKellen’s fruity dialogue.

However, for me the most impressive aspect of the production is its look, the team have created a haunting, atmospheric and terrifying space, from the iconic window, Regan’s bedroom, to the creepy house, complete with exploding lights, through to the pews and confessional boxes of the church this is lynch pin of the production. The scene transitions weren’t as smooth as they could be, with sliding panels but it really didn’t matter. To create the big scares and the more shocking elements of the play the lighting, sound, and projection team have done some fantastic work here.

This is a creepy, tense production that will have enough to please fans of the film/book but is also fine introduction to this controversial, yet entertaining piece of work, I would say that the more controversial elements will still create debate and polarise people’s opinion, but that for me mean’s it’s done its job.

The Exorcist is on at the Manchester Opera House until 26th October. Tickets available here.