Petty political point-scoring, a none democratically elected leader making decisions shaping the future of our nation, decisions driven by a lust for power…sound familiar? Nope this isn’t a political commentary of the UK right now but Shakespeare’s Henry V.

Director Loveday Ingram places the production amidst the current political climate, (or should that be crisis?) St George’s crosses fly high as soldiers swill down booze while chants of ‘England ’til I die’ ring out from the yellow vests.

Shakespeare’s France very much represents the EU with the cast dressed in familiar vibrant blue as yellow starts billow in the breeze.

It may be 2019 but Henry V feels more pertinent now than ever before as Shakespeare’s social and political observations continue to ring true, centuries after they were first penned.

Joseph Millson takes on the role of the heroic leader. Persuasive and full of charm one moment, ruthless and murderous the next. Millson revels in the complexity of the monarch exploring every layer with subtlety and style. 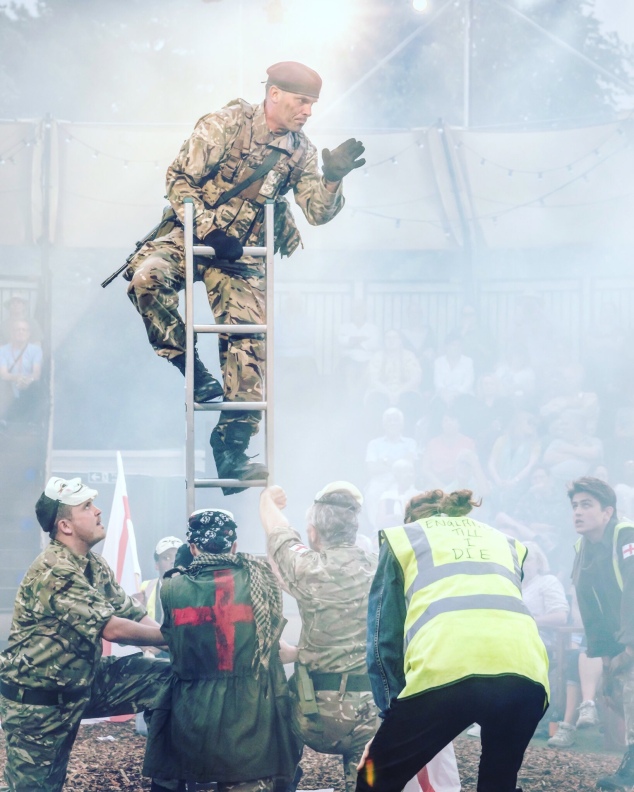 He tackles Shakespeare’s famous “Once more to the breach, dear friends” monologue with a solid and rousing conviction: his army literally chomping at the bit, breathless for the battle to begin. In contrast the commanding warrior loses all composure when attempting to woo Katherine, faltering over his words as he bashfully fumbles in French.

Millson is supported by an impressively strong cast notably Samuel Collings as Pistol, Seren Vickers as Fluellen and Vanessa Schofield as Scroop/High Constable while Mitesh Soni and Sarah-Jane Potts inject some well delivered humour as Alice and Katherine.

Director Loveday Ingram and her cast not only find the heart of Henry V but also the humour too in this solid and potent production as keen observations of the human spirit play out.

Vulnerabilities of leaders are masked with chest pumping and posturing while the battlefield scenes remind us of the catastrophic consequences of decisions driven by political self-promotion. The scene after the battle of Agincourt packing a deeply emotional punch as the cast hauntingly sing to the skies.

This is a cleverly constructed piece which will stay with audiences long after viewing. Vibrant storytelling at its finest.