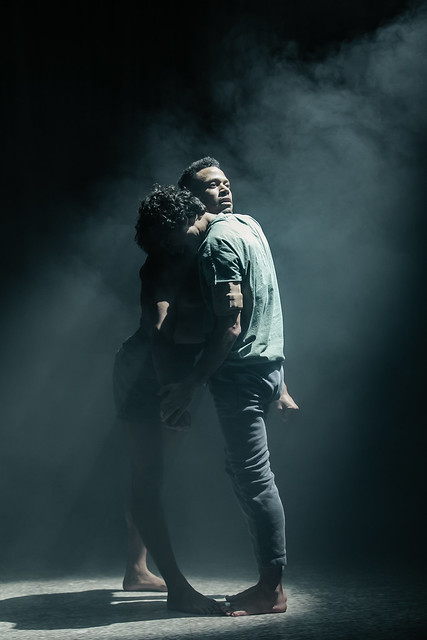 Back in 1973 Equus premiered to huge commercial and critical success, and thus a modern classic was born. Back then the story of a teenage boy with a troubled mind shocked, captivated and enthralled and here in 2019 it still manages to do so and more.

Psychiatrist, Martin Dysart (Zubin Varla) is charged with finding out why a stable boy, Alan Stang (Ethan Kai) would commit the repugnant act of blinding six horses with a spike.

What follows is journey into the fragile mind of a young man who is confused by an overbearing father (Robert Fitch) and devoutly religious mother (Syeeta Kumar). Their bruised, repressed relationship with each other, seeps into the soul of their son with devastating consequences.

Dysart uses a great many tricks and techniques to discover the root of Stang’s illness and builds a strong relationship with the boy but at what cost? For Dysart has his own demons to concquer: trapped in a loveless marriage and constantly questioning his chosen profession. Can Dysart get to the bottom of what happened that horrific night in the stable, and if so at what personal cost to him?

Director Ned Bennett has done an outstanding job creating an intense, intimate psychological drama, that focuses on the reasons why, rather than the act itself. The two leads are exceptional: Varla shows the frailty of Dysart, smoking constantly, somewhat nervous, his interactions with Stang flip the doctor/patient dynamic on its head. He plays the world-weary shrink with humanity and warmth whilst still unsure of his place in the world.

Ethan Kai is equally impressive turning a brave, physical performance filled with nervous energy, anger and fragility. The interactions between the two are leads are what anchors the productions. They are supported by a fantastic cast who have dual roles as humans and horses, it sounds ridiculous but under Bennett’s direction is effective and with clear use of lighting and stage design works fantastically well. The cast should be commended for their hard work and dedication to the craft.

This is visceral, unsettling look at mental health and raises some interesting points about it’s treatment and the ethics that go into getting the results, add into the mix a superb cast and a creative production team at the top of there game, and you get a powerful, brutal piece of theatre that looks fantastic and pulls no punches.

Equus is on at the Lowry until Saturday 27th April tickets available here.