Blood Brothers is one of those shows which some might think is a standard touring musical, a staple for theatre-goers everywhere. However, Blood Brothers is embarking on its 30th Anniversary tour for a reason, it has stood the test of time for over 3 decades and its themes of class, money and love are as relevant as ever.

Written and composed by Willy Russell the man behind Educating Rita and Shirley Valentine, Blood Brothers’ first audiences were school children. He wanted to make sure that he hooked the children sitting in the back row of the class and Blood Brothers certainly does that. The show was soon picked up for a short run in the West End and thus began its epic journey to becoming the theatrical juggernaut it is today. 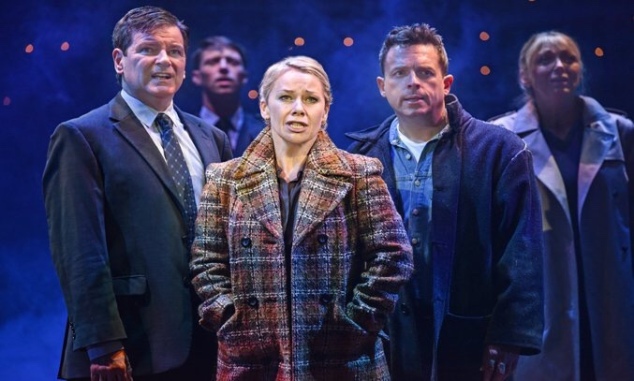 Blood Brothers tells the tragic tale of the Johnstone twins, two brothers separated at birth. Their mother Mrs Johnstone (Linzi Hateley) struggling with mounting debt and the need to feed seven growing children, simply cannot afford to keep both of her babies. Enter Mrs Johnstone’s employer Mrs Lyons (played convincingly by Paula Tappenden); Mrs Lyons cannot have children and the pain is etched on her face. In a fateful deal, Mrs Johnstone gives away one child (Joel Benedict as Edward) and keeps the other (Mickey, played by Alexander Patmore).

The play opens, as many great plays do (think Phantom of the Opera), with the ending. From the beginning, we know how it will play out and this adds to the sense of foreboding and tragedy. Narrator (Robbie Scotcher) asks us to make up our own minds – does Mrs Johnstone have a stone in place of her heart? Scotcher is ever present; he is our slightly menacing moral compass, questioning the characters’ decisions and reminding us of their inevitable fates.

The brothers continue to meet, drawn together by fate and across the class divide which will eventually tear them apart. Time is moved swiftly and effectively on by Scotcher and we see Mickey and Eddie grow up and become young men, albeit with very different lives and opportunities.

Russell’s aim was for the music to be woven into the story and the songs and musical patterns weave themselves throughout the narrative. The soundscape is dramatic and occasionally builds up to a crescendo loud enough to make the audience wince along with the drama. Stand out songs include Tell me it’s not true and Marilyn Monroe.

Andy Walmsley’s set design is simple but effective. The claustrophobic feel of the Liverpool slums and the contrasting bright feel of the Lyons’ living room take us back to the 1950s/60s but also show the class divide which runs throughout Blood Brothers.

The cast is fantastic and extremely hard working. Alexander Patmore’s Mickey is full of cheeky humour and grit. The scenes when Mickey (Patmore) and Eddie (Benedict) are children are stand out moments and take you back to playing out after school and not having a care in the world. Benedict is likeable as the naïve and privileged Eddie Lyons and the relationship between Mickey and Eddie is affectionate and deep. Linzi Hateley is strong as Mrs Johnstone; full of gumption and humour, you feel for the tough hand life has dealt her. Her character is the lynchpin of the play. Danielle Corlass’ character of Linda is caught in the middle of the class and brotherly divide; she is funny and well meaning.

Blood Brothers is a staple of musical theatre. Everyone should see it. It offers you an evening (or afternoon) filled with humour, tragedy, grit and will leave you feeling as though you’ve been on an emotional rollercoaster. Bring a handkerchief for those inevitable sniffles.

Blood Brothers is on at The Lowry, Salford until Saturday 13th April.here.