Hailed as one of Britain’s most successful female singers, Dusty Spingfield’s turbulent life is absolutely perfect fodder for a musical biography. From political trailblazer to pop chart dominator, the deeply private life of the insular diva offers exuberant highs and heartbreakingly emotional lows; all delivered to a sensational soundtrack of 19 of the chart legends most loved songs.

BAFTA & Olivier nominated writer Jonathan Harvey’s script directed by Maria Friedman moves at a swift pace, giving a whistle stop tour of the legends life, which beyond the kohl eyes and blonde bouffant many of us actually know little about.

There is intimacy and intensity in the form of Dusty’s relationships with partner Lois (Joanna Francis) and Mother (Roberta Taylor) intermingled with the great humour and fun she finds in her longstanding friendships with best pals and vital support network Pat (Esther Coles) and Ruby (Ella Kenion). One thing Harvey doesn’t shy away from is the dark depths of Dusty’s self-doubt, insecurities and dramatic breakdown. This is not a santitsed jukebox musical but a gritty and powerful piece of musical theatre which succeeds in giving you a rich insight into the complex life of the legendary icon.

Katherine Kingsley as lead Dusty is phenomenal. The three-time Olivier-nominated actress captures the very essence of Dusty to perfection, she belts out the big numbers with effortless style and portrays convincingly and with great depth the pain and loneliness of the fallen diva, ready to rise again to the top of her game when the call finally comes. Her emotionally charged performance more than does justice to the late great Dusty, every iconic hand gesture and breathy note feels authentic as she entirely captivates.

Dusty’s impressive back catalogue is used to great effect to move the storyline along, while some songs are delivered by different cast members it’s the more concert style delivery from Kingsley that really takes this production to another level, ensuring a standing ovation during You Don’t Have To Say You Love Me even before the song ends. Other stand out moments include her descent into drugs, drink and debauchery during I Close My Eyes and Count To Ten, her creatively staged comeback during What Have I Done To Deserve This and the touchingly tender and deeply poignant Goin’ Back which is movingly sung from her death bed.

The strong supporting cast is chock-full of talent which special mention to Joanna Francis who gives a strong and gritty performance as Lois, Dusty’s backing-singer and partner. Esther Coles and Ella Kenion as Pat & Ruby, Dusty’s PA and hairdresser but ultimately friends and confidents who bring real wit and joy to the production. 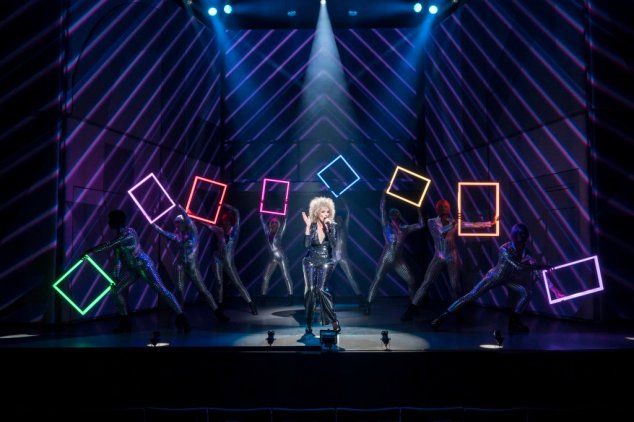 As a first outing this is an enormously entertaining production, there are a few moments in the first half which feel a little clunky where Harvey’s incredibly witty script could be pulled back a little to allow the emotion to rise or allow the audience a moment to feel and experience the tension but these are very minor niggles in what is a superb show which will not only educate and inspire but will undoubtedly remind you of why the legendary Dusty and her smoky lyrics have such timeless appeal.

This is a slick and stylish production with real depth and genuine heart, add to this a leading lady who will quite simply blow you away and you have an absolute must-see show.

On at The Lowry until Saturday 28th July here.