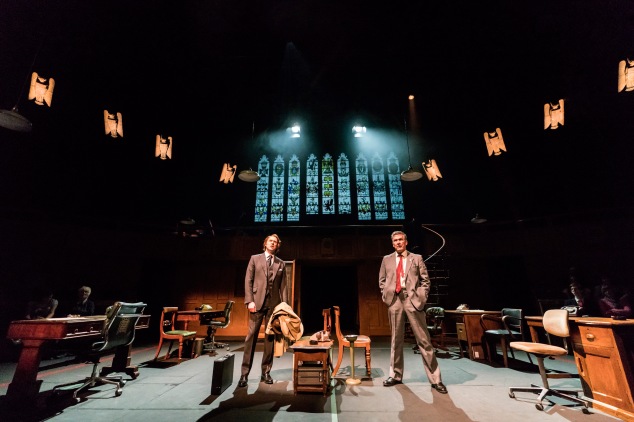 Following sell out runs at the National Theatre and in the West End, James Graham’s critically acclaimed political drama has come to visit constituents, canvassing audiences across the country as part of a new national tour.

Inspired by real and incredibly dramatic political events which took place in the houses of parliament between the turbulent years of 1974-1979, This House lifts the lid on the frenzied activities at the height of a hung parliament where every vote counts as the Government attempt at all costs to operate successfully without the safety of a working majority.

Writer James Graham places the action at the very beating heart of Westminster, the Government and oppositions whips offices. These pressured hubs and the entire backbone of the palace as deals are struck, ears are bent and promises made.

The born to rule attitude of the Tories is displayed superbly by opposition whips William Chubb, Matthew Pidgeon and Giles Cooper, sneering and entitled for whose Boys club loyalty and a great suit is a must.

The working class roots of the Labour party are perfectly embodied by Martin Marquez, James Gaddas, Tony Turner, David Hounslow and Natalie Grady, for whom compromise is betrayal and defeat is not an option.

The frantic scenes are dominated by boisterous alpha males, bolstering for position with the exception of Natalie Grady taking on the role of Ann Taylor, Grady delivers her role to perfection, strong and sure in what was very much at the time a man’s world.

James Graham’s superb writing highlights frequently the laugh out loud absurdity of the political world, as monumental decisions impacting the lives of the masses are made amid point scoring, archaic and ancient traditions.

This House is a true ensemble piece with a fine display of character acting, there is game playing, childishness, flamboyance, passion and genuinely moving moments all wrapped up in an enormously funny script. Jeremy Herrin and Jonathan O’Boyle’s innovative direction ensures the piece is slick and packs the intended political punch. The inclusion of an on stage band adds further depths and pace of the piece ensuring smooth, sharp scene transitions.

Designer Rae Smith’s set combined with Paule Constable’s atmospheric lighting both highlight and mirror the drama on stage. The crumbling & fractured Government being watched by the looming face of Big Ben, forever constant and predictable until one day when like the Government the clock splutters and stops.

This House is an inspired and engaging production, the eccentricities of Westminster acted out by the enormously talented cast is genius. Where there is plotting and scheming there is also camaraderie and genuine affection. The superbly crafted characters have exactly the same demons we see today, do they put principles before party in the battle of idealism versus reality? This beautifully scripted piece could so easily be set in 2018, scarily relevant and a sobering testament to the fact that despite the stakes being so high nothing ever really changes.

This House will make you laugh out loud and possibly cry at the state of modern day politics but undoubtedly will entertain. It’s a pacy, penetrating examination of the political world as differences and similarities are thrillingly exposed. A must-see.