Based on Pucci’s heart-breaking 1903 opera, Madama Butterfly, Miss Saigon remains one of the most powerful and deeply moving musicals of all time, bold in its subject matter, this gritty and gut-wrenching story packs a punch as it carries you along on an epic and emotional journey.

Set during the final days of the Vietnam War, naive 17 year old Kim who tragically lost her family in the bloody battles is forced to take a job in a sleazy Saigon bar, managed by notorious pimp ‘The Engineer’ who revels in selling his girls to the highest bidder. GI John buys Kim for the night for his buddy Chris in a bid to take his pals mind off the horrors of war, resulting in a life-changing 24 hours that see Chris and Kim fall hopelessly in love. Tragedy however is ever present as Chris is ripped away from tragic lover Kim who finds herself cast out and desolate but never losing hope that one day Chris will return and meet the young son he doesn’t know he has fathered. 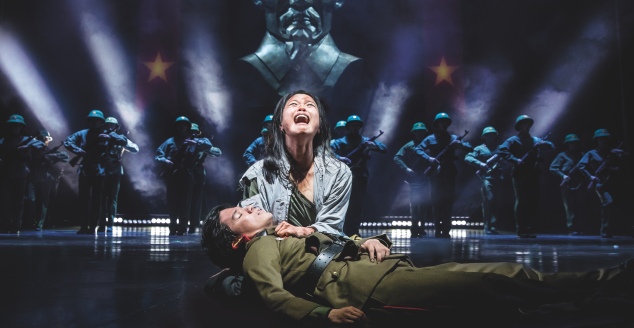 The themes of war, displacement and a warped almost grotesque American dream resonate strongly and are scarily poignant as gritty and emotive numbers playout beside glitzy showstopper “American Dream”. This revised 25th anniversary production loses nothing from the original 1990’s production which ran at London’s Theatre Royal Drury Lane for over 10 years and indeed is enhanced by advances in technology and added depth to the story. The helicopter scene is even more breath-taking as the desperate scenes below unfold and the misery of those left behind feels more urgent and hopeless.

Sooha Kim captures perfectly the trusting innocence of Kim; the changes she goes through are dramatic and desperately tragic. From giddy and gleefully in love to a woman shattered by desperation and the grief of abandonment, she remains hopeful and strong to the end, fiercely determined to give her son the life she knows he truly deserves. 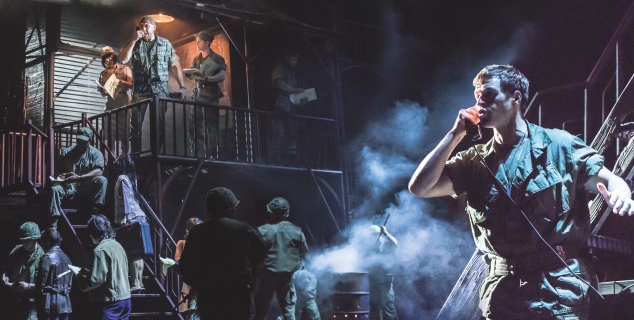 Ashley Gilmour makes for a strong and entirely convincing Chris, dependable and sure his steely attitude turns to mush in the presence of Kim who captures his heart entirely. Their duets together are perfection and offer a beacon of hope in the midst of the desperate scenes to follow.

Red Conceptión’s commitment to the role of the Engineer is impressive, sleezy, sneering yet full of charm his cheeky winks and witty quips ensure the audience love to hate him as his eternal optimism he’ll make it to the USA drives him through.

Zoë Doano’s portrayal of Ellen is sensitive and believable. The addition of Ellen’s song ‘Maybe’ allows the audience to see her as more than just Chris’ new wife (who lets be honest we all kind of hated) and gives a new empathy and understanding of the impossible situation she finds herself in.

As with all Cameron Mackintosh productions the quality shines through, touring productions can often feel a little pinched compared to their West End equivalents however there is no such worry here. The sets are as lavish as Claude-Michel Schöenberg and Alan Boubill’s score is sublime, in this gripping and heartbreakingly beautiful show packed full of passionate emotion. While there are scenes to warm your heart there are those which will also smash it into pieces and leave you barely able to take a breath as you reach for the tissues while this sensationally spine-tingling and unforgettable story unfolds. Has Manchester already seen the best production of 2018? Quite possibly, get yourselves to the Palace theatre to find out!

On at Manchester’s Palace Theatre until Saturday 12th May tickets available here.