The new stage adaptation of the BAFTA nominated 1990’s BBC series is a slick, and frequently hilarious production that looks at growing old disgracefully in Bay View Retirement Village.

The most popular characters from the original series are here, reimagined for 2017, in an all-new script penned by the sitcom’s creator Michael Aitkens. Nichola McAuliffe as Diana and Jeffrey Holland as Tom Ballard steal the show with multi-dimensional and generous performances. McAuliffe in particular shows amazing range as she transforms from a crotchety and bitter ‘senior citizen’ to a passionate and wickedly naughty character and everything in between, with excellent support from Ballard as her love interest.

There was plenty for the audience to enjoy with frequent snappy one-liners which were also balanced with a surprising depth of insight and depiction of tragedy which  were related in a very human way by the lead characters. Samuel Collings and Emily Pithon as Harvey Baines and Jane Edwards made a humorous double-act, if veering a little close to the farcical at times. The other supporting characters of Sarah Chase played by Joanna Bending and Geoffrey Ballard played by David Benson were presented with gusto and professionalism, each made a meaningful impression. Bending was particularly hilarious during the birth scene, and Benson showed excellent acting chops particularly masterfully during final tragic/comic speech depicting his wedding and marriage in a piece of acting that was both hilarious and moving.

Daft but laugh-out-loud funny moments in the chapel at the end of the play were a fitting end to a very enjoyable evening. 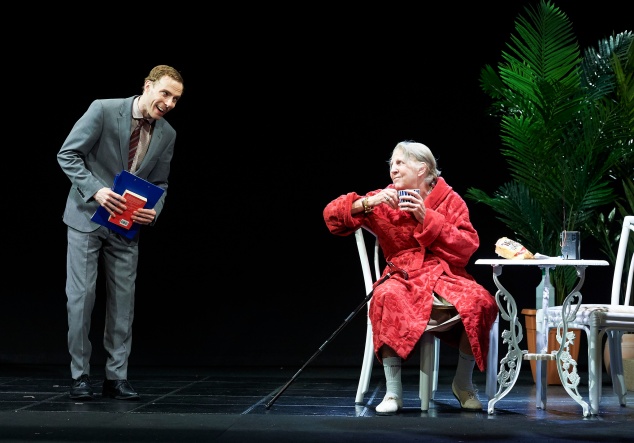 On at The Lowry until Saturday 8th July http://www.thelowry.com/events/waiting-for-god