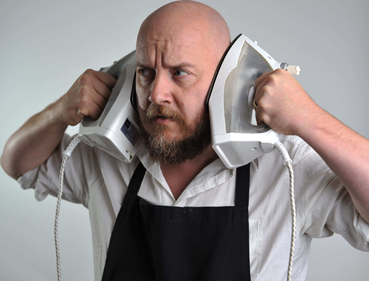 George Egg is an anarchist, now I’m not saying he’s currently plotting to overthrow the Government (although what he does in his spare time is quite frankly none of our business) but when it comes to the rules and restraints of a hotel room, George Egg most certainly likes to bend, boil and slap them in between a Corby trouser press!

Having spent many years on the comedy circuit George has become more than familiar with both hotel rooms and the ridiculously overpriced room service that comes with them, I mean £10 for a cheese and pickle sandwich?! Really?!! So, he decided to take a stand and do something about it, thus his show was born. George sees past the traditional uses of your average hotel room’s equipment and with a little bit of thought, creativity and lashing of sachets of malt vinegar, somehow not only manages to create a three course meal (and an impressive one at that) but delivers a highly entertaining comedy show throughout.

Where we might see a small and a little bit useless travel kettle, George sees an opportunity to create his own tasty ricotta before gently poaching a fresh seabass to perfection, and don’t even get me started on his use for a Gideon Bible!

George is a total foodie, his knowledge and creativity are exceptional, add to this the fact he can make you laugh too and you’ve got a pretty marvellous all-rounder. Multi-tasking his way through first, second and third courses, George entertains with jokes, comedy stories and fun foodie facts along the way, all while doing things with a hotel iron you never thought possible! The show is fast paced and highly entertaining, made even better when you realise you get to try the food at the end of the show! There was even a guest appearance from Great British Bake Off finalist and owner of The Hive Bakery, Luis Troyano. Innovative, creative and engaging, you’ll leave the show with a smile on your face and the burning ambition to stay at a Premier Inn!