Based on the classic book by Raymond Briggs and the much loved film directed by Dianne Jackson, Birmingham Repetory Theatre’s The Snowman flies into Manchester’s Opera House this week.

This enchanting show, now in almost its 25th year remains true to the original story with a few added surprises and unexpected treats along the way. One Christmas Eve we see a little boy lovingly build a huge snowman, hours later, far too excited to sleep he creeps downstairs to find that his snowman has magically come to life and is about to take him on an exciting adventure he will never forget.

This classic production features a sparkling array of enchanting characters including the villainous Jack Frost, a beautiful snow princess, super cute sleigh pulling deer and even a limboing banana! Ruari Murchison’s set is fabulously festive as wintry projections give a sense of everything taking place from within a giant snowglobe. There is no speech in this dance and musical piece nor is it needed, the storytelling delivered by the cast of colourful characters is wonderfully clear and enchants the very youngest to the very oldest in the audience.

Composer Howard Blake’s score further adds to the descriptive nature of the production, from loud stomping footsteps through the snow, the ticking of a clock to the delicate drop of snowflakes his score is sweeping and magical. Robert North’s choreography suits each individual character perfectly, from prancing penguins to jolly Father Christmas who wiggles his bum before dancing a jig. And of course the classic, “We’re Walking In The Air” is featured to great effect, astonishing the children in the audience entirely, we won’t spoil the surprise though, you’ll have to see the show! 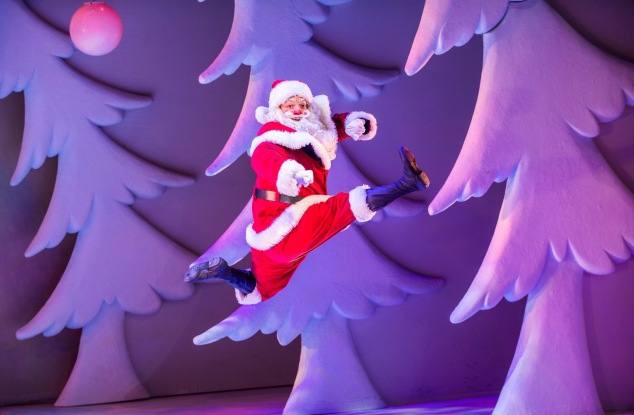 A perfect introduction to theatre for young children with its clear and vibrant storytelling, The Snowman is an entirely enchanting production offering a taster of ballet in an informal and accessible way. Genuine humour and strong characterisation in this charming tale ensures The Snowman will continue to be a family favourite for many years to come.