Opening with a snarling and solo rendition of the much loved Mack the Kinfe, David Thacker’s version of Bertolt Brecht and Kurt Weill’s 1928 anti-capitalist ‘play with songs’ packs a re-energised and impressive punch.

Set in the near future where Queen Elizabeth is dead the country is awaiting the coronation of King Charles III, the powers that be work together to oppress the poor. Corrupt police are in cahoots with criminals while ruthless capitalists getting richer by the day by keeping the working classes down, making fat profits from the work they tie them to. Macheath (David Birrell) runs rings around both the corrupt authorities and the ever plotting underworld, with women, his only weakness in life seemingly being the only people who might be able get the better of him.

James Cotterill’s set is industrial and inventive; levels of scaffold add height to the Octagon’s performance space offering the actor/musicians full involvement in the production.

The themes in David Thacker’s version resonate deeply as corrupt police, dodgy politicians, seemingly inexplicable fires and benefit cuts all get a mention bringing this Threepenny Opera bang up to date. Macheath’s treatment of women mirrors the injustice and exploitation seen so frequently in society, no more so than this last two weeks, it is a production which speaks powerfully about the times we’re living in. As always where there is social commentary there is sophisticated satire as the cast deliver this script with genuine wit and great style.

Birrell is exceptional as Macheath, dangerous and manipulative; his brooding presence has just the right amount of menace about it, his voice rich, strong and powerful. Eric Potts as the odious Jonathan Peachum is superb, full-on and incredibly funny his paring with wife Celia (Sue Devaney) offers genuine laugh out loud moments throughout. Anna Wheatley as Polly Peachum is outstanding, sassy and strong she throws herself heart and soul into the character and has the audience in the palm of her hand.

Packed full with live music and incredibly clever and catchy lyrics The Threepenny Opera is a show that will entertain hugely yet send you away contemplating life and the injustices within it, powerfully politically and enormously entertaining David Thacker has got the balance just right in this slick, snarling and incredibly entertaining production. 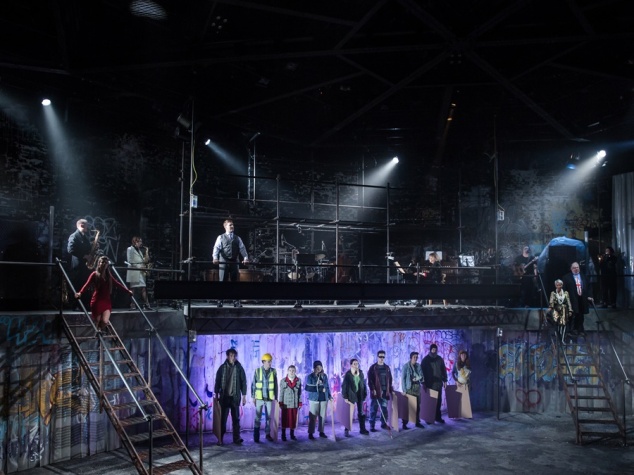 On at the Bolton Octagon until Saturday 4th November https://octagonbolton.co.uk/whats-on/theatre/the-threepenny-opera/#tickets