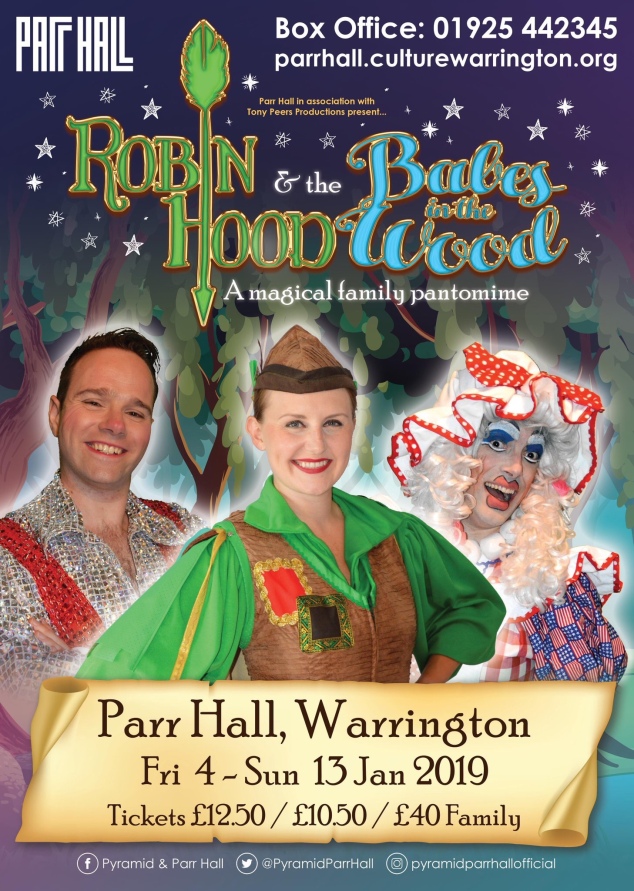 The decorations may have come down and the tree has been packed away but there’s one festive treat still on offer as Robin Hood & The Babes in the Wood plays at Warrington’s Parr Hall until Sunday 13th January.

This traditional production is packed full of the usual pantomime favourites, cream pies in the face, water guns as well as being grabbed by the ghosties, or was it the ghoulies? There’s also a sprinkling of topical modern references including the floss, a certain Baby Shark song and even an appearance from the one and only Donald Trump as this fun, family show offers laughs a-plenty for all ages.

As a double act both Beck and Carnell are fabulous fun, quick witted and enormously entertaining with impeccable comedy timing the duo ensure the action moves at a perfect pace as they gently guide us through the story throwing in plenty of laughs along the way. Ian Moore’s lecherous Sheriff of Nottingham revels in the boos while the Sheriff’s reluctant henchman Snarly played by Edward Leigh shows there’s more to him than meets the eye.

Robin Hood is a great fun production which offers the perfect introduction to festive theatre at a family friendly price. The small cast work brilliantly together, clearly having a lot of fun on stage they succeed in taking the audience along for this traditional and cheeky ride. While there aren’t the big show stopping numbers or dazzling choreography of bigger budget productions the laughs come thick and fast ensuring this panto covers all bases in terms of appeal, from toe-curling close to the bone jokes for the adults to slap-stick silliness for the kids.

My fellow mini-reviewer remarked on the way back to the car “My cheeks hurt from laughing so much” a true testament to the enduring appeal of panto; cheeky, charming and chock-full of fun.

Catch Robin Hood and the Babes in the Wood at Warrington’s Parr Hall until Sunday 13th January. Tickets available here.