Elvis Aaron Presley is the undisputed King of Rock N Roll, which is just a fact. Presley is beloved by millions of people around the world: in the UK alone, he had 21 number one singles, a feat yet to be matched. However Presley wasn’t always top dog: during the mid 1960’s things we’re looking pretty grim for ‘Elvis the Pelvis’: a string of poorly received films, his last live performance coming in 1961, it would be fair to say that by 1968 Elvis wasn’t in a good place.

However all that would change with the famous NBC ‘68 Comeback Special’ television broadcast which is where This is Elvis starts. The production opens at the NBC studios as we see a performer riddled with self-doubt and confidence issues only to make a triumphant comeback. Presley is back on the map and wanting to hit the road again, however the strangle-hold that his manager, Colonel Tom Parker, has over him forces Presley into undertaking a 57 show residency in Las Vegas, a situation Presley isn’t keen on. In addition to this, there are marriage problems, anxiety issues, and a certain degree of pressure from the Memphis Mafia, the nickname given to friends and associates of Presley.

This is certainly a production of two halves: the first being that of a musical, the second being a tribute concert, with the latter working out more than the first. Acts one and two provide a useful insight into the extraordinary pressure that Elvis put himself under, in addition to the external issues that were blighting him. Though done in a ham-fisted manner, they are essential to gaining an understanding of Presley. During the Las Vegas show-case finale we are treated  to one of the legendary Las Vegas’s performances with all the showmanship and charisma we associate  with the ‘King’, however the performance is punctured with a great deal of pathos as well.

Steve Michaels is outstanding in the lead role: an international award winning Elvis tribute act in his own right. His performance during the Las Vegas concert is outstanding: he has a fantastic voice and it really shows through as he belts out such classics as Jailhouse Rock, In The Ghetto, and Burning Love: which had everyone up on their feet dancing midway through the final act. However what set this aside from being a caricatured performance is the way Michaels injects some of Presley’s mannerisms and foibles in the performance; it really is a star turn.

Michaels is backed by a 10 piece band who are fantastic, with credit falling at the feet of musical director Steve Geere. The musicianship and talent on display is a treat to behold and in addition, the Las Vegas stage design by Andy Walmsley of bright neon lights, and Presley’s name up in lights add glitz and glamour to proceedings.

Overall, despite a slow start, and some clunky plot points that really could be handled better, this entertaining show providing an insight into some of the demons that blighted Presley’s towards the end of his life, but also an opportunity to remember him for the songs, and the charismatic, captivating performer he was. Elvis fans will love it and for those that aren’t familiar with his music this would be a great place to start. So best dig out the blue suede shoes and white jump suit and head on down to the Palace! 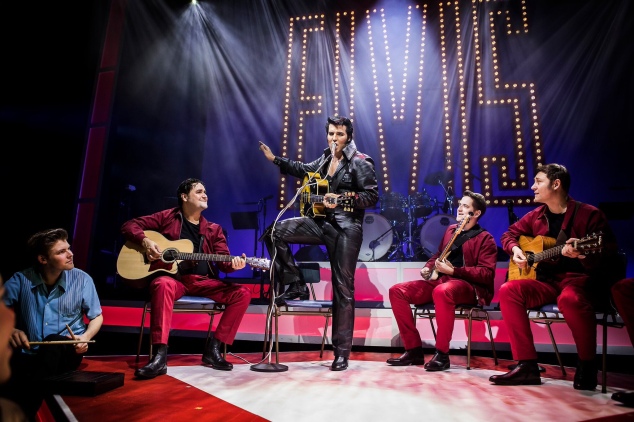 This Is Elvis is on at the Palace Theatre Manchester until 16th June tickets can be found here.