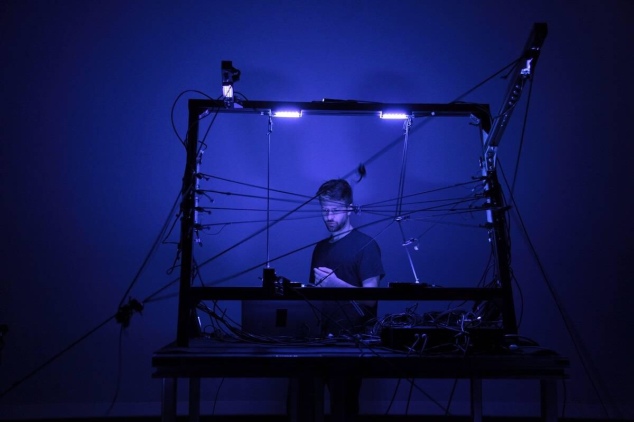 Yesterday was a first for me. I’ve never watched a digital performance before, I genuinely wasn’t entirely sure what one was but I went to the Lowry to watch Interferences by Aleixs Langerin-Tetrault with a completely open mind. I’m glad I did.

When entering the space the audience is greeted by a huge industrial looking metal frame with wires attached everywhere in the middle of the stage. It was almost a sculpture, I found it to be quite a harsh, ominous looking piece of equipment and couldn’t begin to imagine was sound was about to come out of it.

The lights went down and Alexis appeared on stage, we had been told that he had worked with a choreographer for this piece and I was intrigued to see how that was going to come into play. Wires that looked like thin bungee rope were stretched from one side of the frame to another, each one having its own unique sound or vibration (which I later found out were created by sensors on the rope) so that when plucked either simultaneously or on their own created a different sound each time.

More and more ropes were added, stretched across the frame, crossing with other ropes, and each one creating another layer of sound. The lighting was a huge part of this piece too, each rope or movement had its own effect on the lights. As the web of ropes increased as did Alexis’ movements and ‘battle’ with the machine, twisting, pulling, stretching, sometimes with slow, almost tortured movements and sometimes with erratic, tense, plucking movements.

It was quite a joy to see this man with his machine that he has created, a machine he knows intimately but by his own admission is never quite sure exactly what it is going to do.

Although Alexis’ movements have been choreographed, no two shows are the same, his movements can be controlled but the sound coming from the machine can differ greatly show to show, room to room which I can only imagine adds to the excitement of each performance.

What also struck me about this performance was the wonderfully diverse audience and there’s clearly no age minimum or limit for the enjoyment of Digital performance. I felt like I’d been let into a secret club that I’d never before considered joining perhaps because I’m a terrible technophobe. But I would go again, I even walked away feeling like I’d understood, not how the sound was created, not the foggiest idea how he does it but I understood why so many people enjoy this kind of performance.