Opening Night got an exclusive look behind the scenes of the National Theatre’s critically acclaimed Hedda Gabler as it arrived at The Lowry this week as part of it’s current UK tour.

Reworked by Olivier and Tony Award-winner Patrick Marber best known for his work on Closer, this reimagined version of Ibsen’s classic see’s newly married Hedda arrive back from a six month extended honeymoon to the reality of a married life she confesses she ‘settled’ for. Hedda has returned to a place that feels soulless and suffocating, somewhere she feels entirely bored and deeply frustrated by. Constantly battling the demons within Hedda’s release seems to come from the destruction of any harmony she sees, she takes delight in causing pain by upsetting and even destroying those around her. 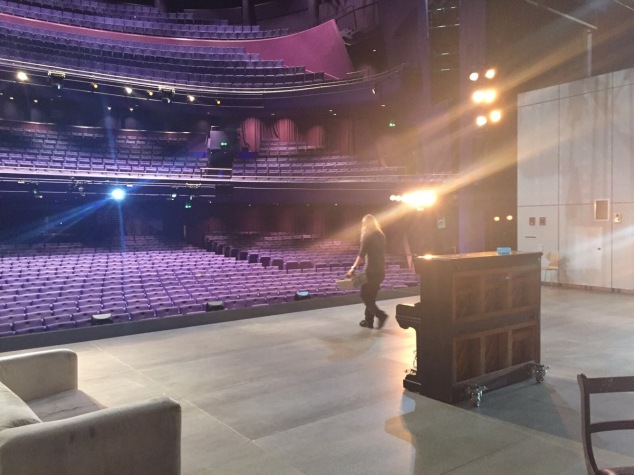 Jan Versweyveld’s set and lighting design play a huge role in bringing director Ivo van Hove’s vision to life. The entire play is set within the same scene, Hedda and Tesman’s apartment which is sparse, unfinished and minimalist. There are no fixtures nor fittings aside from an impressive and commanding fire which is revealed part way through the production and becomes an important centrepiece. When Hedda was on at the National Theatre the stage floor was made from real concrete and genuine plasterboard made up the bleak walls, whilst this is not practical for touring the set has been cleverly adjusted painting MDF to look very convincingly like real plasterboard.

The large patio window and blinds from which the majority of the stage is lit by are used to great effect, the lighting changes to indicate different times of the day while the shadows created by the vertical blinds offer visually striking symbolism in the shadows they create.

Company Stage Manager Siân Wiggins explained that there are no entrances or exits on stage, all cast members make their entrances and exits to the apartment via the theatre auditorium, Hedda however never leaves the stage adding further to the feeling of confinement as the sparse walls surrounding Hedda begin to feel more and more asylum like.

Siân further explained to us how the impressive and striking fireplace is controlled, simple screens are drawn back in order to reveal the impressive centrepiece as the lighting engineer has full control over the flames, built on a standard central heating type system flames can be increased as the production demands offering a further dramatic and compelling element to this incredibly slick production. 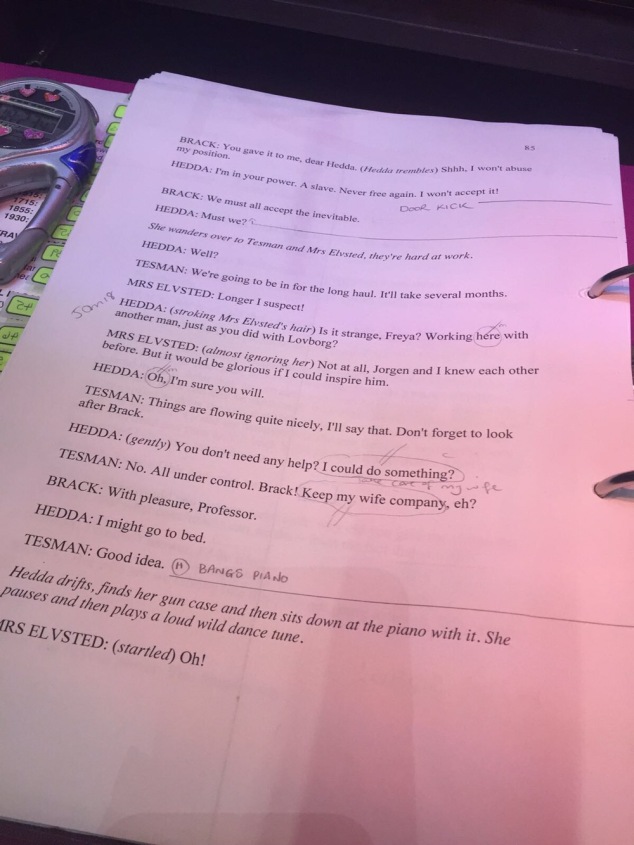 Hedda’ comforts such as her lipstick, tissues and her Father’s pistols reside within slots in the walls, Siân explained that although we see these as an audience it may in fact not be what the rest of the characters see in reality, this is just Hedda’s reality which becomes more and more apparent as the play develops. Old paint splattered buckets of flowers could actually be beautifully crafted floral arrangements, the sparse furniture may be comfortable and cosy further evidence of the turmoil and unsettled mind of our central character.

There are only three more days to catch this bold and engaging production which boats all the style and creativity of the National Theatre’s original production, head to http://www.thelowry.com/events/hedda-gabler to book your tickets now.

On at The Lowry until Saturday 4th November.